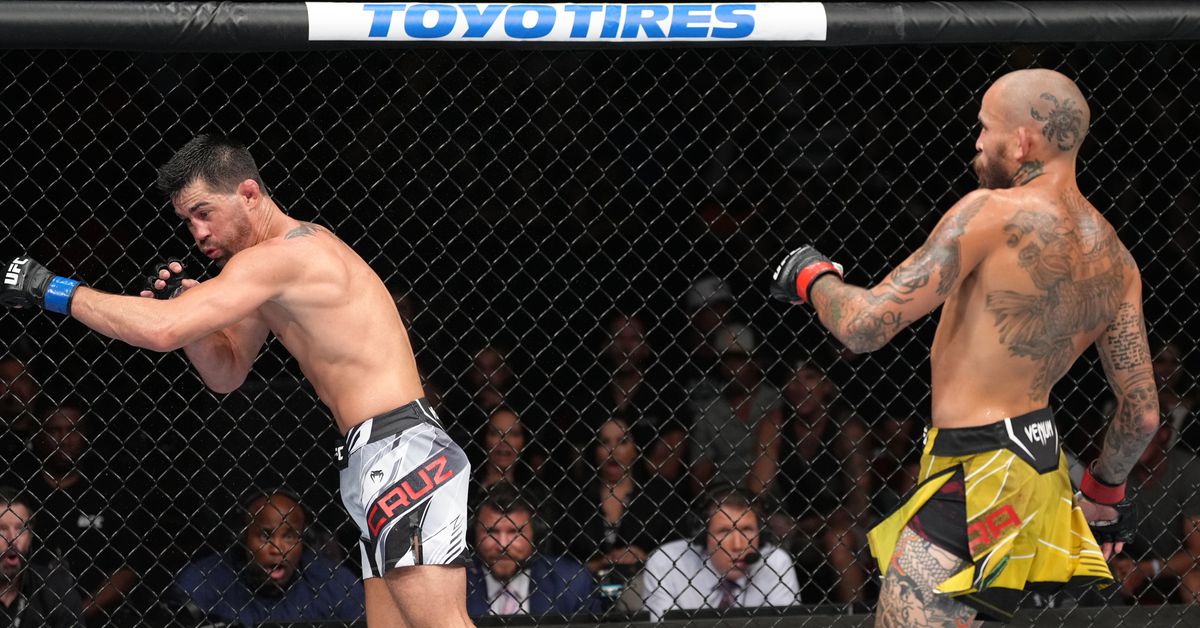 
The finish-happy UFC San Diego main card involved a club and sub, a 65-second TKO, a third round TKO, a wild stand up war, a Fight of the Year candidate, and a stellar head kick knockout!

In the main event, the UFC’s #5 ranked 135-pounder, Marlon “Chito” Vera viciously knocked out the former bantamweight champion, Dominick Cruz, with a fourth-round head kick. The volume was all on the side of Cruz, but Vera hurt Dom on a few occasions before ultimately landing a killer kick to the kisser. Cruz pretty much went face down, and a couple of followup punches got through before the referee stopped the fight. This is Chito’s fourth victory in a row, and appears to be one step closer to a shot at the belt.

In the co-main event, we got a fight for the ages! Nate Landwehr waged absolute war with David Onama in a good ol’ fashioned slobber knocker! Onama had Landwehr in all sorts of trouble in the opening round, but Nate rallied in the second to put a hurt on David. Landwehr continued to repeatedly hurt Onama in the third, but somehow David was able to dish out some damage just before the bell. When it was all said and done, Landwehr walked away with the majority decision. One judge had it a 28-28 draw, with the other two officials seeing it 29-27 for Nate. Go watch this FOTY candidate ASAP!

Before that, Yazmin Jauregui won a unanimous decision in a crazy back and forth fight with Iasmin Lucindo. We got a ton of intensity in this one, with both fighters biting down on their mouthpieces, and exchanging multi-punch combos in the pocket. It’s amazing that nobody was ever dropped. Both competitors fought their hearts out, treating the fans to an exciting three rounds of constant action. Although Jauregui got the dub, it feels like there weren’t really any losers in this one.

Earlier in the night, undefeated fighter Azamat Murzakanov realized a third round TKO on a veteran in Devin Clark. Murzakanov was thumping with his left hand, and after dishing out some excellent body work, he scored the fight ending knockdown with a heater to the solar plexus. The fight was stopped after a prolonged onslaught of ground strikes, and Murzakanov keeps his unblemished record intact at 12-0.

Priscila Cachoeira earned herself a speedy first-round TKO over Ariane Lipski in just 65-seconds. It was a left hook that wobbled Lipski, and the right put her down. It was ferocious ground and pound that had the referee stepping in and stopping the match. Continuing to show off her power, Cachoeira has now won four of her last five outings.

Opening up the main card, Gerald Meerschaert pulled off a cool club and sub on Bruno Silva in the third round. Meerschaert was attacking the body with kicks throughout the fight, but it was his left hook that dropped Silva, and a guillotine finished the job. All ten of GM3’s UFC victories have come within the distance.

Marlon Vera def. Dominick Cruz by KO at 2:17 of round 4: Bantamweight

The match began and Cruz went right after Vera with a head kick to flurry. He then started to attack the lead leg of Chito, before scoring a short-lived takedown. Then, Cruz stepped in with a low kick, but Vera dropped him with a left hook. Cruz quickly stood up and went right back to unloading his blitzing volume. He then hit a takedown with just under a minute to go in the round, but Chito threatened with a triangle that made Cruz stand up.

Cruz went right back to his funk in the second round. He was attacking the legs and giving Vera a bunch of different looks. Vera would land some hard punches and kicks of his own, but it was nowhere near the same frequency as Cruz. Chito started coming forward a lot more this round, but Cruz proved to be as elusive as ever.

Cruz opened the third round with a stinging leg kick, followed by another blitz of punches. It wasn’t long after that that a big right hand from Chito wobbled Cruz. Vera wasn’t able to build off of the moment with Cruz recovering rather quickly. Dom tried to shoot for a takedown, but Chito hit a gorgeous sprawl to avoid it.

Cruz tried again for a takedown to start the fourth frame, but failed to get the fight to the floor. Then, a stiff jab from Vera dropped Cruz, who quickly recovered again. Shortly after that, a nasty head kick came flying in and smacked Cruz flush in the face. Cruz hit the deck and Chito followed up with fight-ending ground and pound. EEK!

Onama came out popping his jab as Landwehr looked to pressure. The fighters started to trade in the pocket, trying to take each other’s head off. A right hand from Onama briefly sat down Landwehr, and opened up a cut under his left eye. Then, a nasty right to left dropped Landwehr again. Onama got on top and started to drop strikes, but Landwehr was able to spin on top. The fighters stood up and went right back to swinging at one another.

Landwehr continued to batter Onama in the second, and after he threw him to the ground, he elected to walk away and hype up the crowd. Onama stood up and clipped Landwehr with some stinging straights that jarred him. Landwehr regained his composure and delivered some more knees to the head. Just when it looked like Onama was out of it, he dug deep and started to swing back in the closing moments of the fight. He rocked Landwehr, but was unable to produce a finish before the bell.

There was no feeling out process to get this one going. The fighters met in the middle and instantly started trading leather. Lucindo wobbled Jauregui in an early exchange, but Yazmin quickly recovered and returned some fire of her own. Lucindo was really sitting down on her punches, and seemed to possess the power advantage. Jauregui was also mixing in some leg kicks, but when she would get touched, you could see her being physically moved.

The same sort of intensity dripped over into the second round. In an exchange, the fighters landed at the same time, but it seemed as though Lucindo came out of it a bit shaken. Lucindo clinched up and cleared the cobwebs, but the momentum was on the side of Jauregui. The explosive exchanges kept happening, with each fighter landing heat.

The final frame saw more of the same, which was phone booth fighting on a napkin. Again they stood right in front of each other, with both connecting with crisp punches. As the fight went on, Lucindo seemed to be landing the cleaner punches. Jauregui didn’t really seem to be rocked at any point, but she was getting caught flush at times.

Azamat Murzakanov def. Devin Clark by 1:18 of round 3: Light Heavyweight

Murzakanov was backing up Clark from the sounding of the bell. He was threatening with heavy overhand lefts that had Clark backing all the way up to the cage. Clark was showing a lot of feints, and ended up staggering Murzakanov with a head kick. Murzakanov immediately clinched up to recover, and stayed there until the bell.

The second stanza saw Murzakanov blast Clark with a left hand that stung him. He then started to rip to the body with heavy punches, while keeping Clark on the ropes. Another massive left hand wobbled Clark and caused him to fall over. That’s when Murzakanov got on top and started to drop hammers to the body. Murzakanov stood up, as did Clark, and the fighters clinched up until the bell.

Within the first minute of the final round, Murzakanov delivered another monstrous left hand to the body to drop Clark. Murzakanov jumped on him with a plethora of ground strikes, and although the ref gave Devin every opportunity to improve his position, Azamat would not be denied. The fight was finally waved off and Clark was rescued.

Priscila Cachoeira def. Ariane Lipski by TKO at 1:05 of round 1: (W) Bantamweight

Cachoeira stung Lipski early with a big left hook. She recognized that Lipski was hurt and followed up with fists of fury, overwhelming her and dropping her with a right hand. Cachoeira pounced with furious ground and pound, and Lipski was unable to recover before the referee stepped in. WOW!

Gerald Meerschaert def. Bruno Silva by submission (Guillotine) at 1:39 of round 3: Middleweight

Silva was pressuring with body kicks right away, with Meerschaert returning kicks to the body and legs. The hands of Silva started to fly, but Meerschaert was doing well with rolling with a lot of them. Meerschaert changed levels and hit a takedown to get on top, and tried to get some ground and pound going, but nothing major managed to get through.

Both men were working their kicks early in the second stanza, with Silva mixing in his punches. Meerschaert was connecting with kicks to the liver, which prompted Silva to swing wildly. When Silva started connecting, Meerschaert would turn his back and run from the attack.

The final frame saw Meerschaert continue to peck away with his kicks. Silva tried to find a way to get his strikes going, but Meerschaert was being elusive. Then, a left hook from Meerschaert dropped Silva! Meerschaert swung with a few punches before locking up a tight guillotine. Silva tried to escape, but the hold was on and he was forced to tap out. This was a good ol’ fashioned club and sub!