Marlon Vera made a statement at UFC San Diego. After struggling with Dominick Cruz's technique for the first couple of...
Read more
Home CELEBS 'You s--t all over us'
CELEBS
August 6, 2022 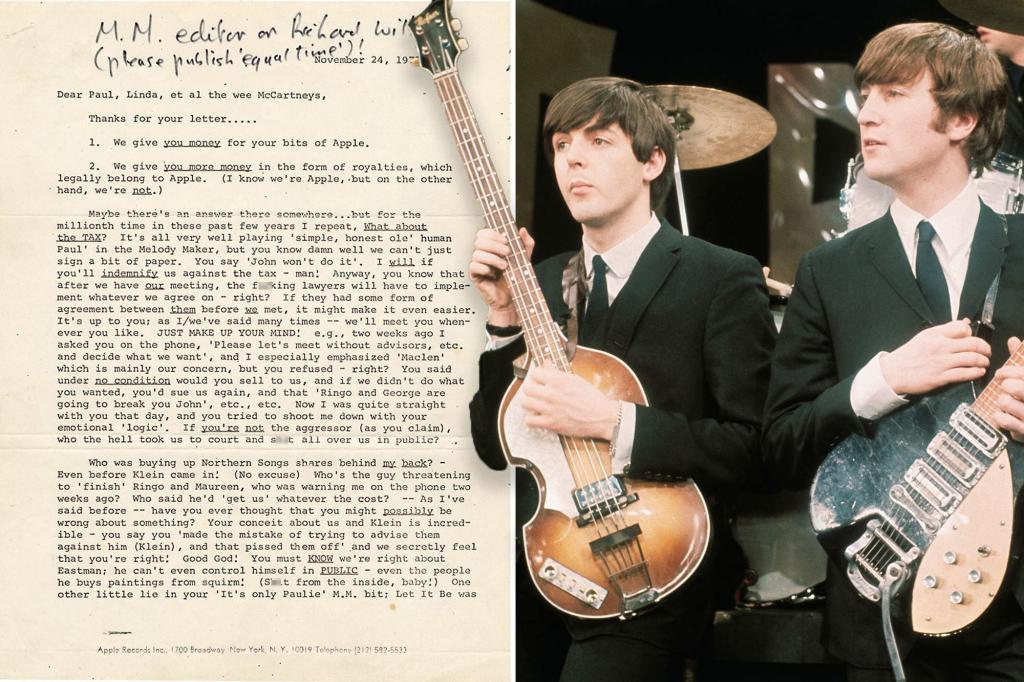 
John Lennon couldn’t let it be.

An angry letter written by the rocker to former bandmate Paul McCartney is expected to fetch up to $40,000 at auction.

The three-page diatribe was composed by the “Imagine” hitmaker in November 1971 — 18 months after the spectacular breakup of The Beatles.

Bidding on the letter, which is open via the music memorabilia site Gotta Have Rock and Roll, currently stands at $22,000.

At the time he sent the typewritten letter, Lennon — then age 31 — was furious with McCartney over an interview he did weeks earlier with music magazine Melody Maker.

The duo long had a turbulent relationship, but tensions had boiled over after McCartney sued The Beatles following their split in 1970. In the suit, McCartney sought the dissolution of the band’s contractual partnership after Lennon and bandmates Ringo Starr and George Harrison appointed manager Allen Klein. to preside over their financial affairs.

“It’s all very well playing ‘simple, honest ole’ human Paul’ in Melody Maker… [but] If you’re not the aggressor (as you claim), who the hell took us to court and s–t all over us in public?” Lennon aggressively asked in the letter.

“As I’ve said before – have you ever thought you might possibly be wrong about something?” he tartly added.

“Your concept about us and Klein is incredible,” the rocker further declared, defending Beatles bandmates Starr and Harrison.

While much of Lennon’s grievance focuses on the financial fallout following The Beatles’ split, he also blasts McCartney’s politics, accusing him of being a closet conservative.

At the time, Lennon was an outspoken opponent of the Vietnam War and had just written his peace anthem “Imagine.” In the Melody Maker interview, McCartney hit out at Lennon’s songwriting, saying there was “too much political stuff.”

“Your politics are very similar to [conservative activist] Mary Whitehouse’s,” Lennon sniped in his correspondence. “Saying nothing is as loud as saying something.”

Lennon also defended his relationship with wife Yoko Ono — who has long been accused of breaking up The Beatles.

“The bit that really puzzled us was asking to meet WITHOUT LINDA AND YOKO … I thought you’d have understood by now that I’m JOHNANDYOKO,’” he wrote.

However, the superstar signed off his letter by saying there were “no hard feelings.”

“I know we basically want the same, and as I said on the phone and in this letter, whenever you want to meet, all you have to do is call,” Lennon concluded.

The pair’s frosty relationship thawed in subsequent years, but they never played publicly together again. McCartney last saw Lennon in 1976 when he came to visit his former bandmate in New York City.

The duo continued to chat over the phone before Lennon’s assassination in 1980.

In the years since, McCartney has often spoken about his fraught relationship with Lennon, whom he met as a youngster.

The “Come Together” crooner raised eyebrows back in 2018 when he admitted they once masturbated together during a night with other male pals.