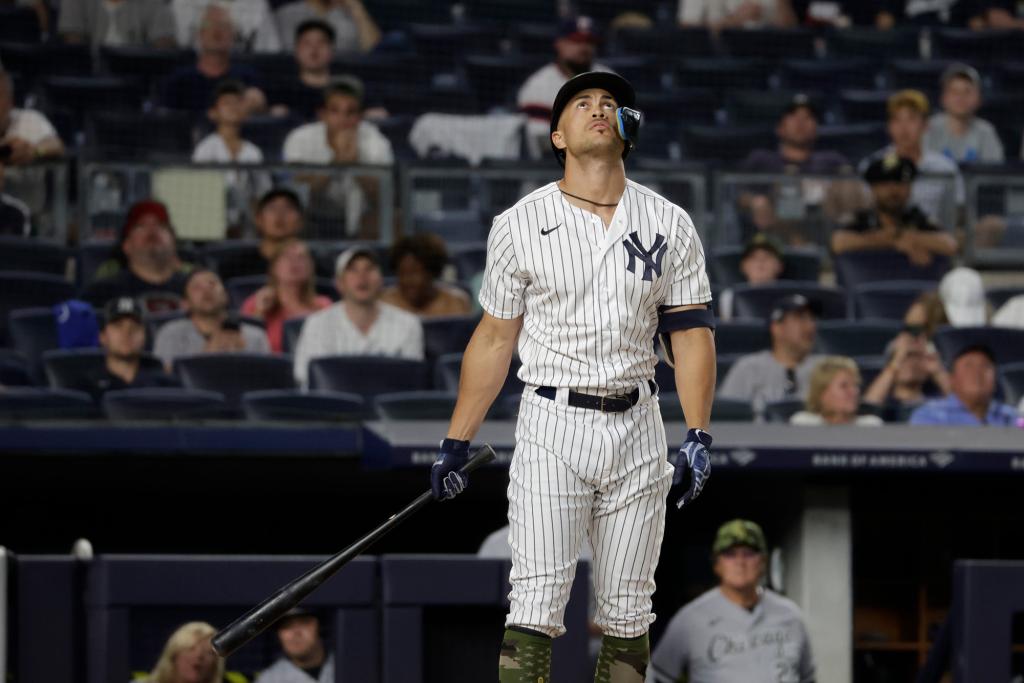 
Through recent events, we finally learned that the Yankees of 2022 aren’t perfect, either professionally or personally.

There are finally a few L’s on the board, and one big E by a well-known professional agitator who went over the line, mocked a respected rival and earned the one-game ban he drew from Major League Baseball.

Even worse in terms of the standings, the injured list is finally coming into play, and ominously, that the roster is starting to become populated. High-priced closer Aroldis Chapman, who with some irony has an Achilles injury as well as being the Yankees ‘Achilles’ heel, has started the trend, and it may not stop there.

The concern now is that stars DJ LeMahieu and Giancarlo Stanton, exactly half the new “big four” (different than the Core Four) of their prodigious lineup, may join Chapman on the shelf. LeMahieu, who will play through almost anything, and did so last season, has pain in his left wrist. Stanton, similarly tough, has what is described as right-calf tightness (but most of us call pain).

There’s suddenly a line at the MRI machine.

Let’s face it, a year like 1998 comes only once every 100 years, and while there was some early hope, knowing that the calendar has turned to the 21st century, the reality is that a 162-game slate is littered with pitfalls. Alas, some real issues are starting to show.

“Adversity is coming for you. You’ve got to be able to weather the storm… the season doesn’t stop for anyone, ”manager Aaron Boone said.

Josh Donaldson’s memorably idiotic and obviously offensive trash talk that woke up the somnambulant White Sox and his victim, the beloved Tim Anderson, seemed to have the opposite effect on the Yankees, who quite noticeably stayed mostly silent regarding the issue involving their mouthy infielder. Boone, who is famed for rarely saying a discouraging word, and star Aaron Judge, who’s becoming something of a speaker around here, spoke for all when they suggested Donaldson’s decision to call Anderson “Jackie” multiple times on the field was nothing short of regrettable .

MLB agreed, calling Donaldson’s unwanted agitation “disrespectful.” They stopped short of saying it was racist, as it is not possible to read someone’s mind or tell someone’s heart, as Boone mentioned again. White Sox people, to a man, didn’t buy Donaldson’s story. There was no inside joke, as Donaldson claimed, just judgment poor enough everyone on both sides agreed.

Why Donaldson is appealing his one-game ban remains beyond comprehension, even to Yankees people, who have advised him to take his medicine.

Of greater interest to Yankees fans, some of whom didn’t distinguish themselves by continuing the “Jackie” taunt the next day, is how unsightly the play has been lately, at least by the standards of the champions we had already crowned by mid May .

No question, unmistakable cracks are starting to show.

If it’s ironic that Chapman has an Achilles injury, it doesn’t help, especially now that Michael King is proving occasionally fallible. Folks were crushing Jonathan Loaisiga’s seemingly unhittable pitches before he landed on the IL, too.

The impenetrable bullpen suffered another loss when Chad Green, one of the multi-year stalwarts, became the latest to suffer from the UCL tear epidemic, necessitating Tommy John surgery that will take him out until sometime in the 2023 season. That’s a sad one, particularly for him personally, as this was his walk year.

King, who seemed on top of the world, on Tuesday allowed a go-ahead three-run homer to old friend Rougned Odor before the Yankees rallied to beat the perennial patsy Orioles by a single run, 7-6 in extras.

Worse though are the potential offensive absences, as LeMahieu, an MVP contender for two straight years before being slowed last year by a core injury that required surgery (no surprise, The Machine played through it), and Stanton, half of their dynamic two towers , may miss time at the wrong time.

“Every team deals with issues and injuries,” the judge said. “It comes down to: When you get punched, can you get back up?”

This may be the Yankees’ first real test of the 162-game slate. They still held baseball’s best record at 30-13 entering Wednesday. But for now it doesn’t feel like it. They’ve lost four of six games, and haven’t looked particularly good doing it.

It may feel at the moment as if they have 99 problems. But as long as No. 99 isn’t one of them – and Judge remains healthy and on his 65-homer pace – eventually, they should be OK. That is the hope, anyway.

Cardi B has revealed she wants to collaborate with Lil 'Kim for her upcoming album, and wants to write a mixtape with her...
Read more
- Advertisement -
New york