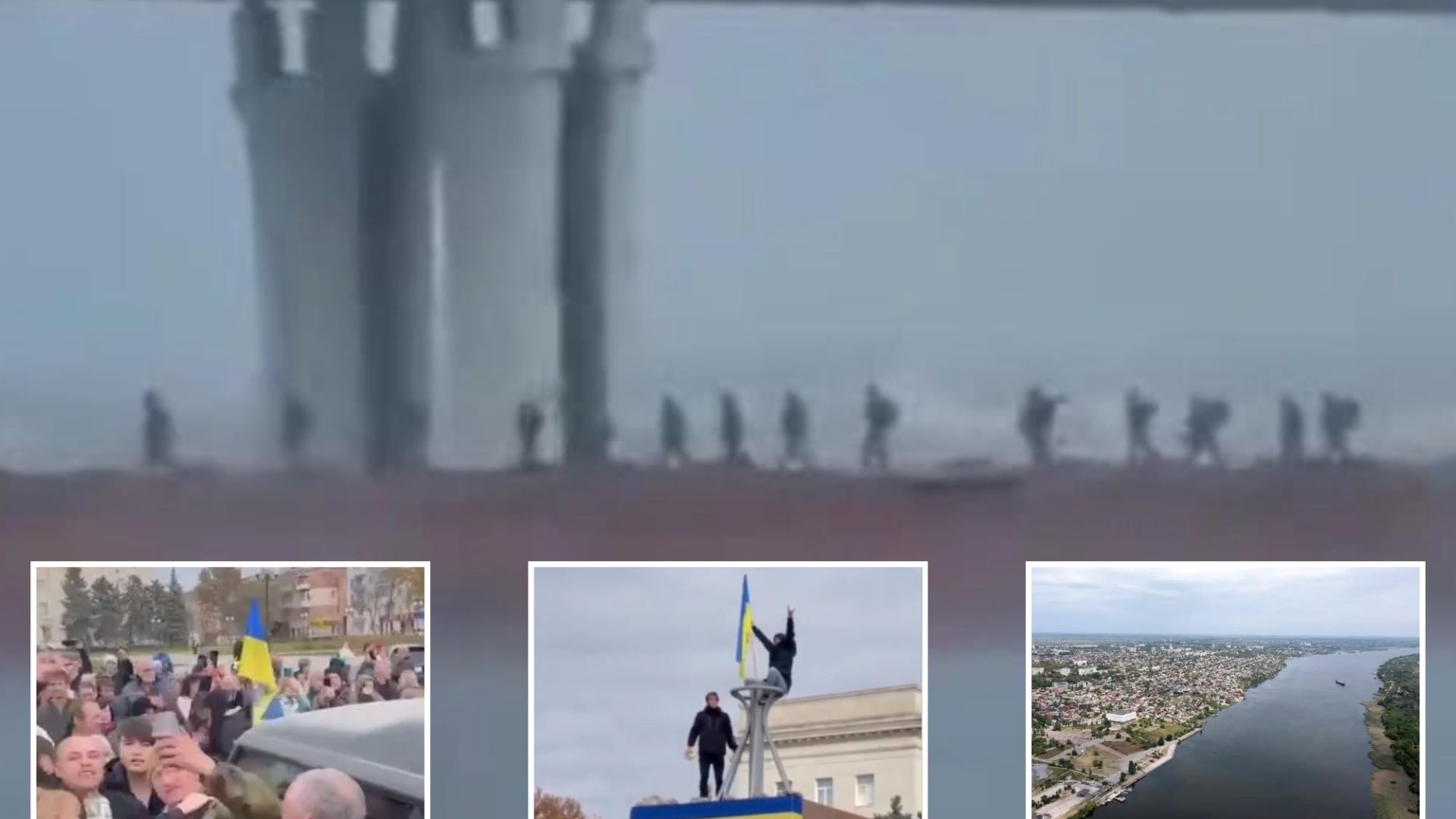 
THE Ukrainian flag has been raised in Kherson as humiated Putin’s defeated troops were recorded fleeing across the Dnipro river on foot – with many drowning on the treacherous retreat.

Kyiv’s forces triumphantly swept into the strategically-important city on Friday as Mad Vlad’s troops rushed to get out.

“The retreat routes of the Russian invaders are under fire control of the Ukrainian army. Any attempts to oppose the Armed Forces of Ukraine will be stopped,” the message read.

It comes as Moscow’s “chaotic” withdrawal to the east bank of the Dnipro river officially ended at 5pm local time, according to its defense ministry.

Conflict expert Mike Martin said the Russians “really balled up” their withdrawal as footage emerged of Mad Vlad’s rejected troops crossing the Dnipro on a pontoon.

“We have the situation where Russian troops are jamming the crossing by points and getting shelled by the Ukrainians,” the War Studies fellow explained.

“They can’t get out fast enough.

“And [Ukrainian forces] are supposedly on the outskirts of the city of Kherson itself (with special forces already inside).

He claims Russian sources said around 20,000 troops were still stuck on the Ukrainian side of the river.

“Reports of panic spreading. The Russian pocket on the West Bank is collapsing super fast. Ukrainians are advancing on three sides.”

It comes amid reports that Russian soldiers were ordered to dress in civilian clothes and escape from the southern city on their own.

“It is safe to surrender to captivity after prior discussing the conditions of surrender with authorized representatives of the Ukrainian command by calling the hotline of the state project of Ukraine ‘I want to live'”.

It comes as Moscow blew up Antonivskiy Bridge – a major thoroughfare connecting both banks of the Dnipro river.

A large chunk of the bridge linking to the Russian-controlled east bank is now submerged under the Dnipro after it was destroyed in a missile attack early Friday morning.

A member of Kherson’s regional council said many Russian troops drowned trying to leave the city.

Reports have emerged of residents hoisting Ukrainian flags in places the Russians pulled out of and greeting troops as they entered liberated areas.

A Ukrainian regional official, Serhii Khlan, said flags were appearing en masse “all over the place”.

He disputed the Russian claim that retreating forces took all their equipment with them, saying he was told “a lot of hardware got left behind”.

Khlan, who spoke to journalists from outside the city, said he heard that some Russian troops were also left behind and had dressed in civilian clothes, possibly with plans to engage in acts of sabotage. He said their exact number was unclear.

The Kremlin remained defiant Friday, insisting the development in no way represented an embarrassment for Russian President Vladimir Putin.

Russia tried to turn Kherson into a “city of death” by mining everything from apartments to sewers, Ukrainian presidential adviser Mykhailo Podolyak said.

He tweeted: “RF (Russia) wants to turn Kherson into a ‘city of death’. The Russian military mines everything they can: apartments, sewers. Artillery on the left bank plans to turn the city into ruins.

“This is what (the) ‘Russian world’ looks like: came, robbed, celebrated, killed ‘witnesses’, left ruins and left.”

Russia has not commented on Podolyak’s remarks.

Ukrainian officials were wary of the Russian pullback announced this week, fearing their soldiers could get drawn into an ambush in Kherson city.

Recapturing the city could provide Ukraine a strong position from which to expand its southern counteroffensive to other Russian-occupied areas, potentially including Crimea, which Moscow seized in 2014.

Meanwhile, Russia has lashed out overnight by striking an apartment block in nearby Mykolaiv – killing six.

Rescue crews sifted through the rubble of a five-story residential building in search of survivors.