HomeSTATESUK does not make things any more...the poor are paying the price
STATES
November 24, 2022 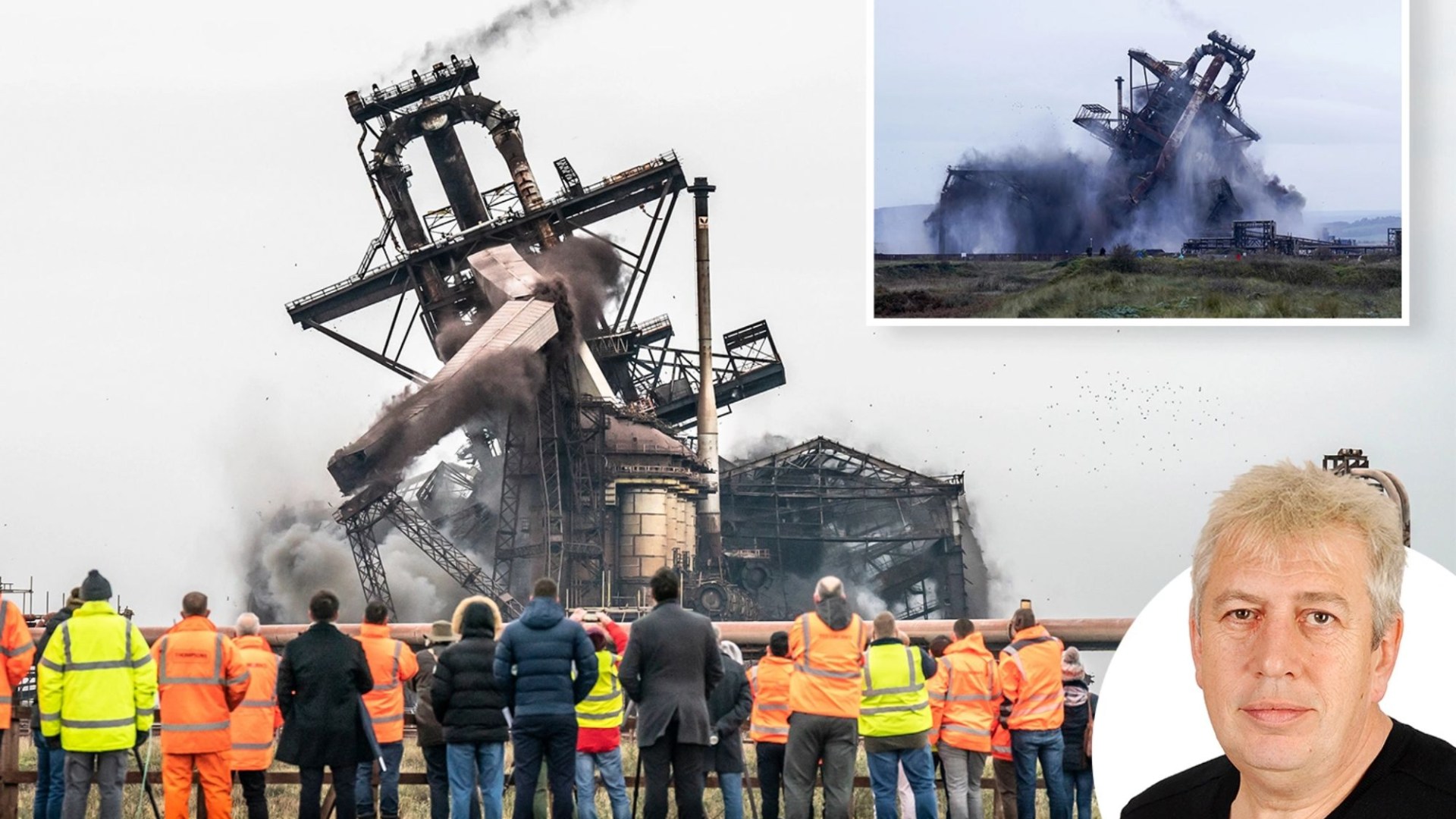 
THEY demolished the giant blast furnace at Redcar today and you could hear the explosion from 20 miles away.

Once the biggest of its kind in the UK, at its peak it churned out 3.6 million tonnes of iron per year.

But it’s just been standing there, crumbling, since the steel plant closed down seven years ago.

Once, the whole ten miles between Middlesbrough and Redcar were steelworks. As a kid I’d see the red-hot molten metal in the furnaces from the train which ran by the side of the plants.

It was exciting and a bit terrifying.

There were a staggering 91 blast furnaces on Teesside, providing work for the entire area.

Just one steelworks — Dorman Long — employed 20,000 people at its height.

Teesside steel made the Sydney Harbor Bridge. We even gave one to the Geordies — the Tyne Bridge.

No longer. Not a single blast furnace left on Teesside.

Thing is, although it was hard and often dangerous work, steel-making paid well.

People had a decent living. The jobs the redundant steel-workers are now doing don’t pay anywhere near as much. At best they ended up as bus drivers.

A lot are in call centers. The money is three-fifths of nowt.

Teesside’s loss is Britain’s loss. Because, truth be told, we don’t make anything any more.

In 1948, manufacturing accounted for almost half of our GDP. Now it’s down to about 12 percent.

In Germany it’s around double that amount, which is one reason why the German economy is so strong.

Use the freedoms won through Brexit

This is a huge problem. Our manufacturing base provided us with hard cash from exports.

The loss of those manufacturing jobs has left us a low-wage economy, dependent upon the service sector.

And as a result, divisions between the rich and poor have grown.

This is one of the big failures of successive British governments which have presided over the closure of our industries.

I’m not arguing we should start making steel again, when they can do it a lot cheaper in China.

But we might make more specialized steel, on a smaller scale, which the Chinese are much less able to do.

We should also be using the freedoms we’ve won through Brexit to exploit the markets in raw materials.

Hell, we’ve seen very little gain from Brexit so far — and that’s because the government hasn’t taken the opportunities which are staring them in the face.

We need to invest in our industries so we might again become one of the world’s powerhouses.

We have a superb research base at our universities. We come up with clever solutions to difficult engineering problems.

But we have failed to exploit our excellence at R&D and tie it to manufacturing — so that we might actually make some real money.

If we want a country which has a National Health Service, and generous welfare benefits for those who are out of work — as well as decent schools, roads, houses — then we need to pay for it.

And manufacturing is precisely the way we might do that.

I was sad to see that old blast furnace brought to its knees.

It’s been a feature of the local landscape for so long, a reminder of the time we led the world in engineering.

If only we could harness that drive again, to keep us a prosperous country.

LABOUR is promising to take a “pragmatic” view on immigration to this country.

I’m not quite sure what that means. Does it suggest that on other issues they will be taking a non-pragmatic view? Or a genuinely stupid view?

Still, at least Keir Starmer has at last grasped that we are taking in far too many immigrants at the moment.

And he is right to insist that British firms must do much better at training homegrown workers to do the jobs required of them.

I agree with him that we need to see an end to the low-pay economy.

But that will require a lot more than simply lecturing the heads of businesses, as Sir Keir did this week.

And I see nothing in Labour’s current proposals that will make much of a difference.

GOD spare us from relationship experts. One wrote about stuff you should never say to your partner.

This list included, “I hate you” and “You don’t turn me on” and “You’ve got a small penis”.

(Or as one girlfriend said to me at a crucial moment: “Hmm. That looks very much like a penis. Except a lot smaller.”)

Other things not to say in a relationship?

How about, “Your ar*e is the size of Canada” or, “You smell like my grandmother just before she died”.

SHAME about the Argies, wasn’t it? Oh, I almost died laughing.

And I’ve only cheered for Saudi Arabia in a football match once before – and that was when they played Ireland.

I could have done without the commentators on ITV getting stiffies every time Lionel Messi got the ball, mind.

OK, he scored from a penalty. But other than that he was neither use nor ornament.

And he was at least partially responsible for Saudi Arabia’s equalizer.

Incidentally, the idea VAR would rule out uncertainty and unfairness.

Umm, still not looking good, is it?

WE are falling out of love with the Full English breakfast, a new survey suggests.

Researchers asked 2,000 people for their favorite meals and treats.

The margherita pizza came next – in fact there were THREE kinds of pizza in the top 12.

I really don’t get pizza. They are just slabs of grease smeared on cardboard.

I think I would rather eat Matt Hancock’s underpants.

In fact, I suspect pizza is the reason why our country has gone down the toilet.

Food for people who don’t really like food – either cooking it, or eating it.

SOME good news for you. The rain buckets down and the streets are under water.

Rivers are overflowing and if you try to walk in the countryside you’ll sink up to your knees in mud.

Somewhere nearby a bloke called Noah has got his saw out.

And guess what? Yup, Thames Water has finally removed its hosepipe ban.

So if you fancy it, you can take a canoe into the garden.
And water the lawn.

LIFE’S A RICH, MAN U

The rich American owners of their club, the Glazer brothers, are set to sell up for about six billion quid.

So there will be rejoicing in United’s fanbase (Guildford, Exeter, Maidstone, Kuala Lumpur etc).

But the fans ought to be a bit worried, too.

Because who are they likely to get as new owners?

It’s not going to be a local bloke who understands the club’s history. The days when that sort of thing happened are well over.

Instead, it’ll be a dodgy billionaire from a corrupt country. Or, at best, a hedge fund from the US.

And if the fans think the new owners will care any more about THEM, then they are even more deluded than I reckoned.

THAT obsessive, demented gremlin Nicola Sturgeon has been shown the door by the Supreme Court, which decided she could not hold a referendum without the PM’s consent on Scotland leaving the United Kingdom.

Sometimes I think it might be better if the Scots DID leave. It would save us a lot.

And it would take away the point of Sturgeon’s existence.

IT’S a terrifying thought, isn’t it?

If the USA wins its game against us on Friday, the Yanks are threatening to send James Corden back to us early.

Think of all we’ve done for you. Special Relationship and all that.

Mind you, they could make it even worse – and send back Corden plus Harry and Meghan.

The stakes, then, are very high indeed.

And if England decides that the game ends after about an hour, much like they did against the Iranians, then things could look very dicey indeed.