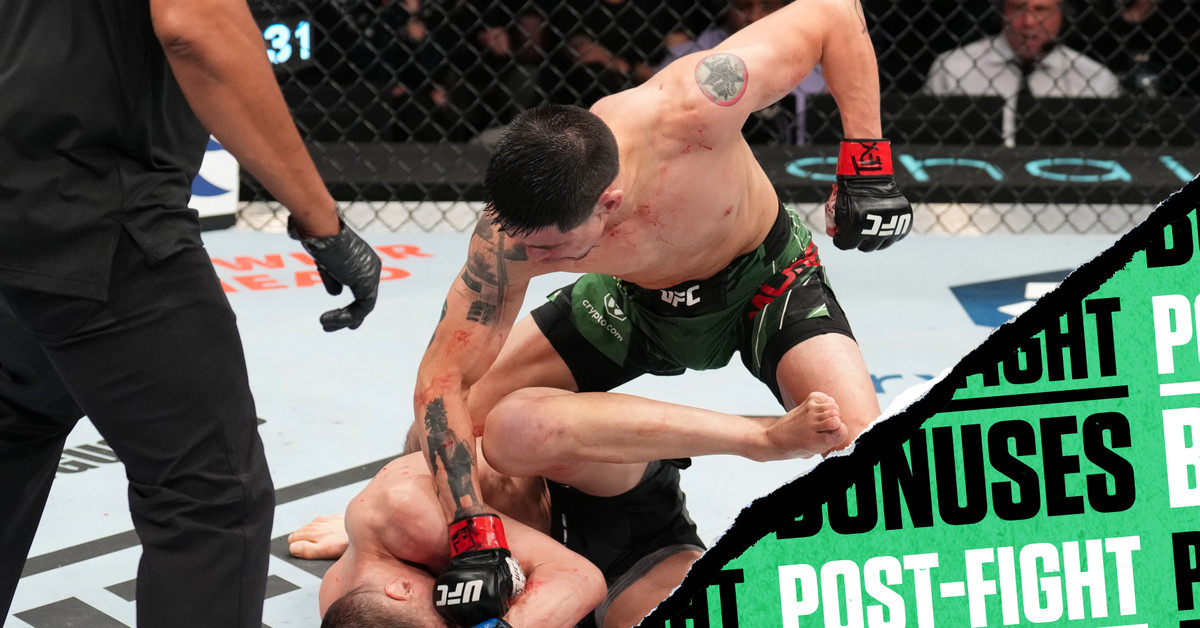 
UFC 277 on Saturday night was a great offering. The bantamweight headliner was thoroughly entertaining, and the flyweight co-headliner crowned a new interim champion.

The preliminary portion of the card saw Orion Cosce earn his first UFC win with a unanimous decision over Blood Diamond. The win was nice, but you know what was nicer? The double backfist! Still not over it. Nicolae Negumereanu went berserk on Ihor Potieria, blitzing the newcomer with punches and knees up against the cage for a second-round TKO. That sequence was especially violent, considering Potieria was without a mouthpiece for most of it. Joselyne Edwards earned a split decision against Ji Yeon Kim, who fell to 0-4 in her past four appearances. Michael Morales kept his undefeated record intact and improved to 2-0 under the UFC banner with a third-round TKO of Adam Fugitt. Want a word of advice? Keep an eye on this prospect. Drakkar Klose met a short-notice opponent in Rafa García, whom he defeated by unanimous decision. Klose told UFC color commentator Joe Rogan he wants a fight against Tony Ferguson next to see ‘who the king of Michigan is.’ Not a bad callout. Hamdy Abdelwahab went the distance with Don’Tale Mayes for a split decision in his UFC debut. Drew Dober vs. Rafael Alves was so much fun! The early ‘Fight of the Night’ contender ended after Dober folded Alves with a brutal body shot in the third round. Alex Morono outstruck Matthew Semelsberger over the course of three rounds. The ‘Great White’ even closed up the left eye of ‘Semi the Jedi,’ who was forced to go all out in the final minutes of the fight. Semelsberger nearly ended things with a flying knee that sent Morono to the canvas, but it was not enough. Morono left the Octagon with his fourth consecutive win.

The main portion of the card got off to a great start as Magomed Ankalaev scored a second-round TKO of Anthony Smith. Ankalaev ground-and-pounded his way to victory after Smith appeared to suffer a leg injury (update: Smith told reporters on press row he broke his leg throwing a kick in the first round). Because this was considered a title eliminator, it would not be surprising to see Ankalaev get a championship opportunity soon. Alexandre Pantoja bulldozed Alex Perez! The ‘Cannibal’ needed less than two minutes to secure a neck crank on Perez, who was forced to tap. Pantoja said in his post-fight interview that he was ‘ready for the title,’ and it would be hard to deny him after a performance like that. Sergei Pavlovich got a 55-second TKO over Derrick Lewis. Wow! The ‘Black Beast’ (and the crowd in Dallas) disagreed with the stoppage, but it was still a win for Pavlovich. Brandon Moreno acquired gold again with a third-round TKO of Kai Kara-France. Moreno vs. Kara-France 2 was a very close fight until the ‘Assassin Baby’ finished it off with a body kick and ground-and-pound. It looks like we might get the first-ever tetralogy in the promotion as Moreno and UFC flyweight champion Deiveson Figueiredo are poised to throw down again. They shared a respectful moment in the Octagon, too.

Amanda Nunes dominated Julianna Peña to reclaim her bantamweight championship. The ‘Lioness’ dropped the ‘Venezuelan Vixen’ several times and held her own on the ground for a clean sweep on the judges’ scorecards. And credit to Peña, who was tough throughout that entire fight. She never stopped moving forward and wrapped Nunes up in a few submission attempts, but to no avail. Now back on the throne, the champ told Rogan she wants some rest before gearing up to defend either of her titles again.

Performance of the Night: Drew Dober and Alexandre Pantoja

Nicolae Negumereanu def. Ihor Potieria by TKO (strikes) at 3:33 of Round 2

Michael Morales def. Adam Fugitt by TKO (punches) at 1:09 of Round 3

Magomed Ankalaev def. Anthony Smith by TKO (ground-and-pound) at 3:09 of Round 2

Alexandre Pantoja def. Alex Perez by submission (neck crank/face lock) at 1:31 of Round 1

Sergei Pavlovich def. Derrick Lewis by TKO (punches) at 0:55 of Round 1

Brandon Moreno def. Kai Kara-France by TKO (liver kick, ground-and-pound) at 4:34 of Round 3

Fight of the Night: Brandon Moreno vs. Kai Kara-France