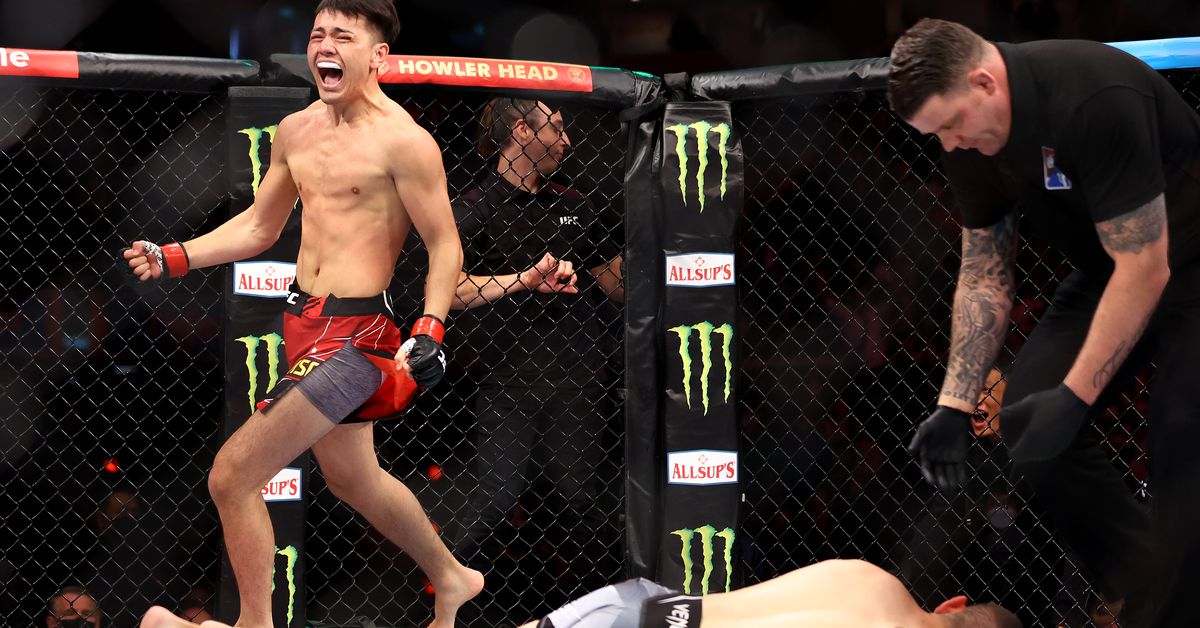 
The UFC 275 preliminary card is in the books, and we got several decisions, but did enjoy two quick and brutal knockouts courtesy of some powerful and well-placed punches – and a crazy war to close out this portion of the event.

In the featured prelim of the night, Joshua Culibao let his hands go to secure a split decision over an incredibly tough Seung Woo Choi. This was a wild one! Culibao scored a knockdown in the first, plus rocked Choi on a couple of other occasions. Choi survived and returned fire, showing off tremendous heart, but was again dropped in the seocnd stanza. In the final frame, Choi earned himself a takedown and warned with a couple of rear-naked choke attempts, but Culibao escaped to reach the scorecards.

Before that, Maheshate made his UFC debut by making a statement with a sensational first-round knockout of Steve Garcia. Maheshate first dropped Garcia in the first 30-seconds, and then less than a minute later he made him face plant with a perfectly placed right hand. Garcia went stiff and Maheshate walked off like a boss! Make sure you keep an eye on this 22-year-old!

Brendan Allen won a grappling-heavy decision over Jacob Malkoun. It was Malkoun who scored more takedowns, but Allen was the one landing strikes in-between scrambles. Malkoun seemed a little surprised at the decision, but it’s hard to be mad at someone losing a decision when the grappling is somewhat close, but the striking is not. The 26-year-old Allen has now won four of his last five outings.

Kyung Ho Kang used his jab and leg kicks to command the cage and win a unanimous nod over Batgerel Danaa. There were plenty of haymakers coming from Danaa, but the polish of Kang’s striking won out to get him back into thew win column.

The first finish of the night happened in the strawweight division when Silvana Gomez Juarez rocked Na Liang with an overhand right, and then put her out with a nasty four-piece punching combination. After two rough outings to begin her UFC career, Gomez Juarez got her very first promotional dub with impeccable style.

Opening up the UFC 275 show, Joselyne Edwards won an unanimous decision over Ramona Pascual. Edwards was hurt by a body kick in the opening act, but finished strong with a clean final round, and even earned one scorecard of 30-27. How did you score this one?

There was a little feeling out to start this one, but it didn’t stay that way. Choi was pumping out more volume with his kicks, making the most of his reach advantage. Culibao was doing his best work whenever he found himself in the pocket. As the round grew long, Culibao was connecting with his left hook, and then badly hurt Choi on several occasions. Choi somehow found a way to tie top and recover, and then went full berserker mode with his own fists of fury. What a crazy round!

Culibao was switching his stance in the seocnd round, giving Choi different looks and catching him off guard. A stiff right hand behind his jab dropped Choi again, but he found another way to spring back to his feet. Choi was showcasing his toughness, but seemed to struggle with the timing of Culibao.

Choi came out launching kicks from range in the third round. He was attacking high and low, keeping Culibao on the outside. The fight drifted into the clinch, where Culibao worked for a takedown, but it was Choi who got the fight to the floor. Choi took the back and warned with a couple of RNC attempts, but Culibao escaped and returned to his feet before the bell.

Maheshate def. Steve Garcia by KO at 1:14 of round 1: Lightweight

This match quickly escalated into a brawl within the first-few seconds of the start. Maheshate scored a knockdown inside the first minute, but Garcia quickly recovered and went right back to fighting. It wasn’t much longer after that when Maheshate uncorked a hellacious counter right hand that caused Garcia to faceplant to the unconscious canvas. WOWSERS!

Allen was opening up with his strikes early in the opening round, while Malkoun was a bit more reserved. Brendan was throwing his punches in combination, prompting Malkoun to shoot in for the takedown. Malkoun got Allen down, but struggled to solidify a dominant position. Allen stood to his feet and hit a gorgeous whizzer kick to get on top, but jumped on a guillotine and wound up on the bottom.

Malkoun went back to his wrestling in the second act. He was able to put Allen on his back, and forced him to work to get back to his feet. Even then, Malkoun just took him right back down, and went right back to controlling from the top of half guard. A botched back take form Malkoun allowed Allen a chance to scramble on top. Allen held on tightly from side control, and then landed one short elbow before the bell.

Allen opened the final frame with a big cross, followed by securing a takedown of his own. Malkoun was quick to stand up, but at least Allen let him know he could get takedowns of his own. Malkoun scored another takedown, and controlled for a bit before Allen found another way to scramble on top. Allen controlled his opponent, racking up some control time and even landing a few elbows before the final horn.

Kang was utilizing leg kicks in the opening round as Danaa was hanging out just outside of punching range. Danaa was missing more than he was landing, but when he connected he did so with authority. As the round went on, the leg kicks from Kang were less frequent, and the punches of Danaa began to get through.

The striking battle continued into the second round. Kang returned to his leg kicks, but Danaa was throwing them as well. The lead leg of either man was getting chewed up. Danaa kept throwing a ton of haymakers, while Kang was popping his jab. Kang also began to threaten with takedowns, and Danaa actually landed an illegal knee to the head while Kang went down for one. The referee didn’t call it a foul and had them fight on.

Kang stuck with his jab in the final frame, but he wasn’t bringing much behind it. Occasionally he would throw his right, and would go back to his leg kicks now and then. The output of Danaa was dwindling in this round, too, which isn’t really surprising considering how many heaters he was launching out there across the first-two rounds. Kang was commanding the cage at this point, jousting the face of Danaa and keeping him on the outside with that jab.

Silvana Gomez Juarez def. Na Liang by KO at 1:22 of round 1: Strawweight

Liang was aggressive with her takedown attempts to get things started, but Gomez Juarez was ready to fend them off. Gomez Juarez stayed composed and unleashed a monstrous overhand right behind her jab that made Liang take a knee. Liang stood up and Gomez Juarez launched a right, left, right, left combo that all connected to get the knockout. Wow!

Edwards pressured Pascual right away, walking her down behind combinations. Pascual found her way into the clinch, but just couldn’t do anything with it before Edwards quickly broke free. Edwards was peppering the body with teeps and side kicks, but it was Pascual who landed a hard Thai kick to the liver that visibly hurt Joselyne. Pascual swarmed looking to finish, and even landed a foot to the face, but ran out of time.

the fighters clinched up early in the second stanza, with Pascual landed several piercing knees to the body. In open space, Edwards seemed to be moving bit slower than she was in the opening round, with none of the pressure she had in the first round. This allowed Pascual to press forward behind her own punches. Edwards kept plugging away with her push kicks and side kicks, but they didn’t seem to be doing much damage. Pascual also scored a short-lived takedown just before the bell.

Pascual hunted for the takedown early in the final round, but Edwards fought it off and landed some punches on the break. Then the same exact thing happened again. Pascual shot in, failed, and then got pieced up for it. Edwards started feeling himself, letting her combinations go and going back to leading the dance. Pascual just couldn’t get a takedown.

Disneyland's "Pirates of the Caribbean" ride said "Ello, poppet" to eager parkgoers on Friday. The ride - which has been at the California...
Read more
Related News
New york

Disneyland's "Pirates of the Caribbean" ride said "Ello, poppet" to eager parkgoers on Friday. The ride - which has been at the California...
Read more
ECONOMY

Almost 100 years after the government took their land, it has been returned. This week, the Los Angeles Board of Supervisors unanimously approved...
Read more
- Advertisement -

NEWYou can now listen to Acesparks articles! A man in Texas was arrested after he allegedly made a "terrorist threat" toward the...
Read more

Chick-fil-A has maintained its position as America's favorite restaurant for eight years in a row, according to the American Customer Satisfaction Index (ACSI)....
Read more

Disneyland's "Pirates of the Caribbean" ride said "Ello, poppet" to eager parkgoers on Friday. The ride - which has been at the California...
Read more