The mayor of the South Korean city of Busan has made a proposal to the presidential office that BTS be granted an alternative...
Read more
New york 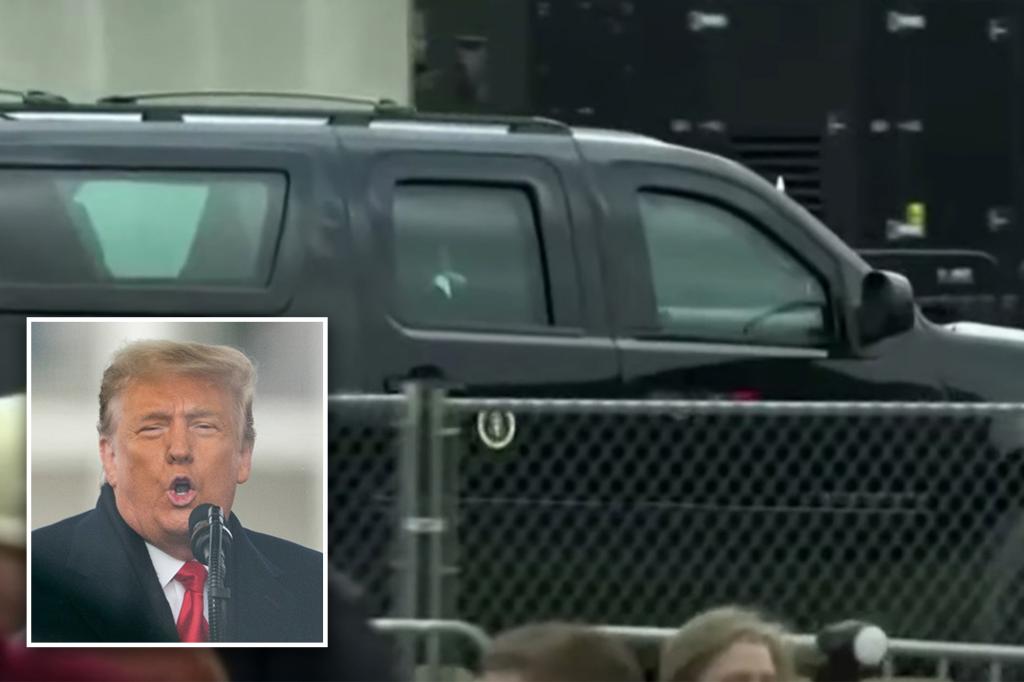 
An irate Donald Trump tried to grab the steering wheel of the presidential SUV away from his Secret Service driver in a desperate effort to join his armed supporters on Jan. 6, 2021 – shouting, “I’m the f — ing president! Take me up to the Capitol now! ” according to shocking testimony from a top former White House aide.

Secret Service agent Bobby Engel stopped the 45th president from steering the vehicle toward the Capitol to join the mob that he had just finished telling to “fight like hell” to stop the election from being “stolen,” she said.

An unnamed source close to the Secret Service later denied the account to numerous news outlets, including ABC, CBS and NBCand said that both Engel and the SUV’s driver are willing to testify under oath.

Hutchinson testified that immediately after returning to the West Wing from Trump’s speech, White House deputy chief of staff for operations Tony Ornato told her about a clash inside the presidential Beast limo involving Engel and Trump – though the incident actually would have taken place inside an SUV that transported Trump to and from his speech.

“I looked at Tony, and he said, ‘Did you f — ing hear what happened in the Beast?'” Hutchinson said. He proceeded to tell me that when the president got into the Beast, he was under the impression from Mr. Meadows that the off the record movement to the Capitol was still possible or likely to happen and that Bobby had more information. “

Nobody had told Trump that the Secret Service determined it wasn’t possible to go to the Capitol, the aide explained.

So when the president had gotten into the vehicle with Bobby, he thought they were going up to the Capitol. And when Bobby had relayed to him, ‘We’re not, we don’t have the assets to do it, it’s not secure, we’re going back to the West Wing,’ the president had a very strong and very angry response. to that, ”Hutchinson said.

“Tony described him as being irate. The president said something to the effect of ‘I’m the f — ing president! Take me up to the Capitol now! ‘ To which Bobby responded, ‘Sir, we have to go back to the West Wing.’

The president reached up to the front of the vehicle to grab at the steering wheel. Mr. Engel grabbed his arm and said, ‘Sir, you need to take your hand off the steering wheel. We’re going back to the West Wing. We’re not going to the Capitol. ‘ Mr. Trump then used his free hand to lunge toward Bobby Engel. “

Trump disputed the accusation, saying in a statement, “Her Fake story that I tried to grab the steering wheel of the White House Limousine in order to steer it to the Capitol Building is ‘sick’ and fraudulent, very much like the Unselect Committee itself – Wouldn’t even have been possible to do such a ridiculous thing. “

The Secret Service, Ornato and Engel did not immediately respond to The Post’s requests for comment.

Hutchinson also alleged several other shocking remarks and actions by the then-president and those around him, including that:

The House of Representatives impeached Trump for allegedly inciting the riot shortly before he left office, but he was acquired by the Senate in a 57-43 vote that fell short of the 2/3 needed for conviction. His acquittal means he’s eligible to hold office again and Trump regularly teases a potential 2024 rematch against Biden.

Trump said last year in an interview with the Washington Examiner’s David Drucker that he would have been able to keep his supporters from committing acts of violence had he been allowed to join the march.

In a pre-recorded deposition that was played on Tuesday, Hutchinson said she had no idea what Trump would do when he arrived at the Capitol building, but recalled: “I know that there were discussions about him having another speech outside of the Capitol before going in. You know, there was a conversation about him going into the House chamber at one point. ”

During her live testimony, Hutchinson recalled getting a phone call from House Minority Leader Kevin McCarthy (R-Calif.) After Trump vowed to his supporters: “We’re going to walk down to the Capitol.” The message from the Republican leader was clear: “Don’t come up here.”

In his pre-riot speech, Trump called on thousands of supporters to “fight like hell” to persuade Republicans to reject swing-state electors for Biden, but his defenders point out that he also called on them to do so “peacefully and patriotically. ”

Hutchinson said she was “disgusted” that Trump sent a mid-riot tweet attacking Pence for not having “the courage” to reject swing-state electors for Biden,

“It was unpatriotic and un-American, and we were watching the Capitol building get defaced over a lie,” she said, later adding: “I still struggle to work through the emotions of that.”

On Tuesday, Trump attempted to paint Hutchinson as a disgruntled employee he barely knew.

“I hardly know who this person, Cassidy Hutchinson, is, other than I heard very negative things about her (a total phony and‘ leaker ’), and when she requested to go with certain others of the team to Florida after my having served a full term in office, I personally turned her request down, ”Trump wrote in a post on his website TruthSocial.

“Why did she want to go with us if she felt we were so terrible? I understand that she was very upset and angry that I didn’t want her to go, or be a member of the team, ”the former president alleged. “She is bad news!”

“She changed lawyers a couple of days ago, and with it, her story totally changed! SHOCKER ??? ” he added.

“A Total Phony !!!” Trump wrote in an additional post.

“Anyone downplaying Cassidy Hutchinson’s role or her access in the West Wing either doesn’t understand how the Trump WH worked or is attempting to discredit her because they’re scared of how damning this testimony is.” tweeted Sarah Matthews, a White House deputy press secretary during Trump’s final year in office.

“For those complaining of‘ hearsay, ’I imagine the Jan. 6 The committee would welcome any of those involved to deny these allegations under oath. ”

Matthews wrote that Huchinson showed “what real courage, integrity, and patriotism looks like.”

“My guess is that before this is over, we will be hearing testimony from Ornato, Engel, and Meadows,” wrote Mick Mulvaney, who served as Trump’s acting chief of staff from 2019 to 2020, when he was replaced by Meadows.

“This is explosive stuff. If Cassidy is making this up, they will need to say that. If she isn’t they will have to corroborate. I know her. I don’t think she is lying, ”he added.

Shortly after the hearing, Mulvaney declared Tuesday to be a “very, very bad day for Trump.”

“A stunning 2 hours: 1) Trump knew the protesters had guns 2) He assaulted his own security team 3) There may be a line from ProudBoys [sic] to the WH 4) Top aides asked for pardons 5) The commission thinks they have evidence of witness tampering. That is a very, very bad day for Trump. “

The mayor of the South Korean city of Busan has made a proposal to the presidential office that BTS be granted an alternative...
Read more
- Advertisement -
New york

The mayor of the South Korean city of Busan has made a proposal to the presidential office that BTS be granted an alternative...
Read more
New york

WASHINGTON — Hundreds of Americans were stranded in Afghanistan following last year's chaotic pullout of US troops — and the Biden administration has...
Read more
- Advertisement -

Retired special agent Anthony Dominicis wants to reassure Americans that the IRS is not coming after them with guns. “It's just not true,” he...
Read more

Billionaire Robert F. Smith put his girlfriend up in a Manhattan apartment and bought expensive homes in California, Colorado and France with untaxed...
Read more