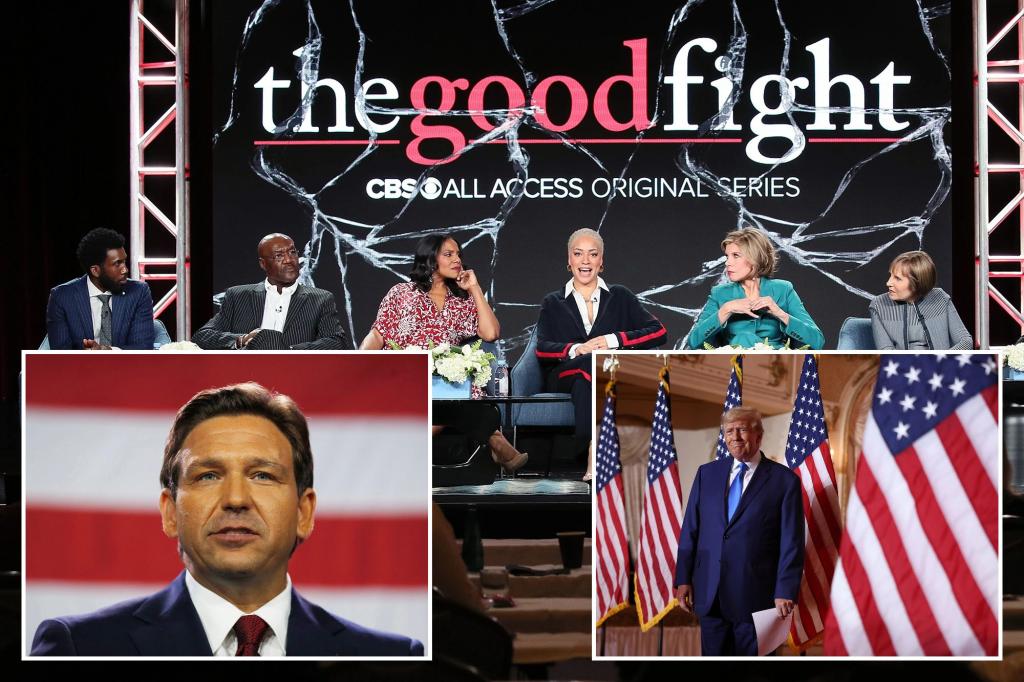 
The series finale of Paramount+ “The Good Fight” left social media users stunned on Thursday for featuring a plot in which a character claimed to be sexually assaulted by Florida Republican Gov. Ron DeSantis, only to confess he was lying later on in the show.

The finale of the courtroom drama’s sixth and final season premiered on Thursday with the episode titled “The End of Everything.” In a clip widely shared online, the episode features the main character Diane Lockhart, played by Christine Baranski, meeting with Felix Staples, a flamboyant, gay provocateur who has made appearances in earlier seasons of the long-running show. In a conference room surrounded by lawyers, Staples claims that he was sexually assaulted by Florida Gov. Ron DeSantis, who forced him to have oral sex following a CPAC conference while interning for his office.

Diane immediately dismisses the accusation as politically motivated “bulls—” despite Staples claiming to have DNA proof. The lawyers spent the episode gathering evidence to expose Staples for lying. He eventually confesses to fabricating the allegations to tarnish the Florida governor’s reputation, because it will put former President Trump “ahead in the polling” in 2024’s presidential race.

The episode ignited a firestorm on Twitter, with users calling the show “unhinged” and questioning the legalities of casting the governor as a potential sex offender in the fictitious TV show. Other users called it the first of many smear campaigns by Hollywood to be brought against the Florida governor as he remains a popular potential 2024 presidential contender.

“How can you tell the next election has begun? This will give you a hint…,” Off The Press author Paul Bedard agreed.

“Is this kind of thing legal? ” Washington Examiner contributor Harry Khachatrian asked alongside the clip. “I realize the whole free speech thing is pretty robust, but can you just insert a real public figure into your fictional movie and make him a sex offender?”

“This is only the second most outrageous political allusion from this series, the first being that episode of The Good Wife where they pretend Donna Brazile is single-handedly responsible for choosing presidential nominees,” Free Beacon associate editor Tim Rice recounted.

Others pointed out that the clip circulating online was largely taken out of context and failed to show the character’s confession to lying about it for political purposes.

“Stop sharing that DeSantis TV show clip thing,” podcaster Noam Blum wrote. “The whole point of the episode is that the guy is lying and DeSantis didn’t do anything.”

“This isn’t what it sounds like,” Washington Examiner columnist T. Beckett Adams agreed. “If you know the show, you know the “accuser” is a reoccurring character best described as a rat f–ker. He’s lying here, and the lawyers bust him. Show doesn’t actually accuse DeSantis of assault. Please do not ask me how I know any of this.”

The season finale isn’t the first time “The Good Wife” spinoff series landed itself in hot water online. In 2019, the show’s official Twitter page posted an image from one of its episodes that shows a list of “target words” including: “Assassinate,” “President” and “Trump” in a red column and a second orange column that began with the words: “Mar-a-Lago” and “Eliminate.” The show was forced to put out a statement arguing that the post was taken out of context, and “created an impression and provoked a reaction that was not intended.”

More recently, in the show’s fifth season, the episode titled “Previously On” featured a rare admission of faith from Diane – a self-declared atheist – for the sake of electing Joe Biden as president. The scene depicted Lockhart having a “coronary event of some kind” while watching the updates of the 2020 election in real-time. The show also took a dig at Trump when it tackled the topic of censorship under his administration in a separate episode.