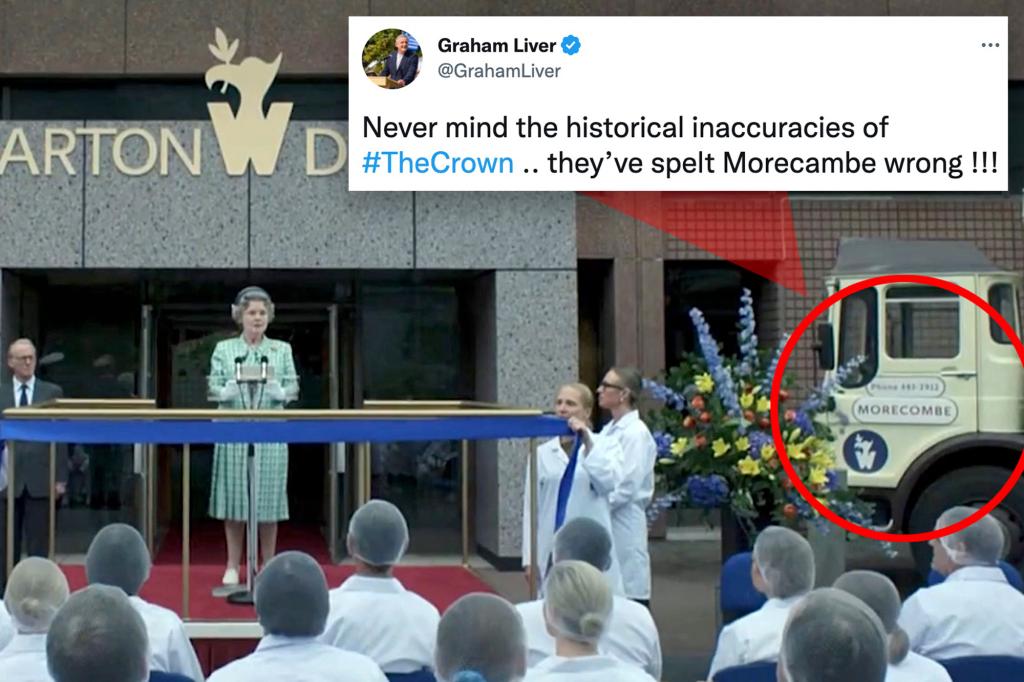 
“The Crown” Season 5 premiered Wednesday — and eagle-eyed fans have already spotted an inaccuracy in the first episode.

In the opening scene, Queen Elizabeth II, played by Imelda Staunton, delivers a speech at a dairy factory in the Lancashire town of Warton. In the shot is a dairy tanker that bears the name “Morecombe” — the incorrect spelling of Morecambe, a nearby town.

At first, fans were ecstatic the town was mentioned on the premiere, but they were quickly disappointed by the spelling error.

“@TheCrownNetflix seriously? You do know that ‘Morecombe’ doesn’t exist and ‘Morecambe’ does? Think you need to sack a few researchers. I’m shocked such a schoolgirl mistake was made. Bet you thought no one would notice…. #TheCrown #netflix #morecambe #lancashire,” another quipped.

This isn’t the series’ first eyebrow-raiser. It’s already documented that Season 5 will skate past many events and reflect a mix of historical facts and Hollywood pizzazz.

The new season follows the royal family’s ups and downs in the 1990s. The first episode recalled Charles and Diana’s 1991 trip to Italy — 10 years after their wedding and a year before their separation — while the final episode is set in July 1997, a month before Princess Diana’s untimely death.

British screen legend Judi Dench and former Prime Ministers Tony Blair and John Major have expressed concern over the show’s accuracy. Both men are portrayed on the new season.

Earlier this week, two of the show’s creative production members shared how a stolen prop used in Episode 6 almost sent the police on a murder investigation.

Season 5 of “The Crown” is now streaming on Netflix.