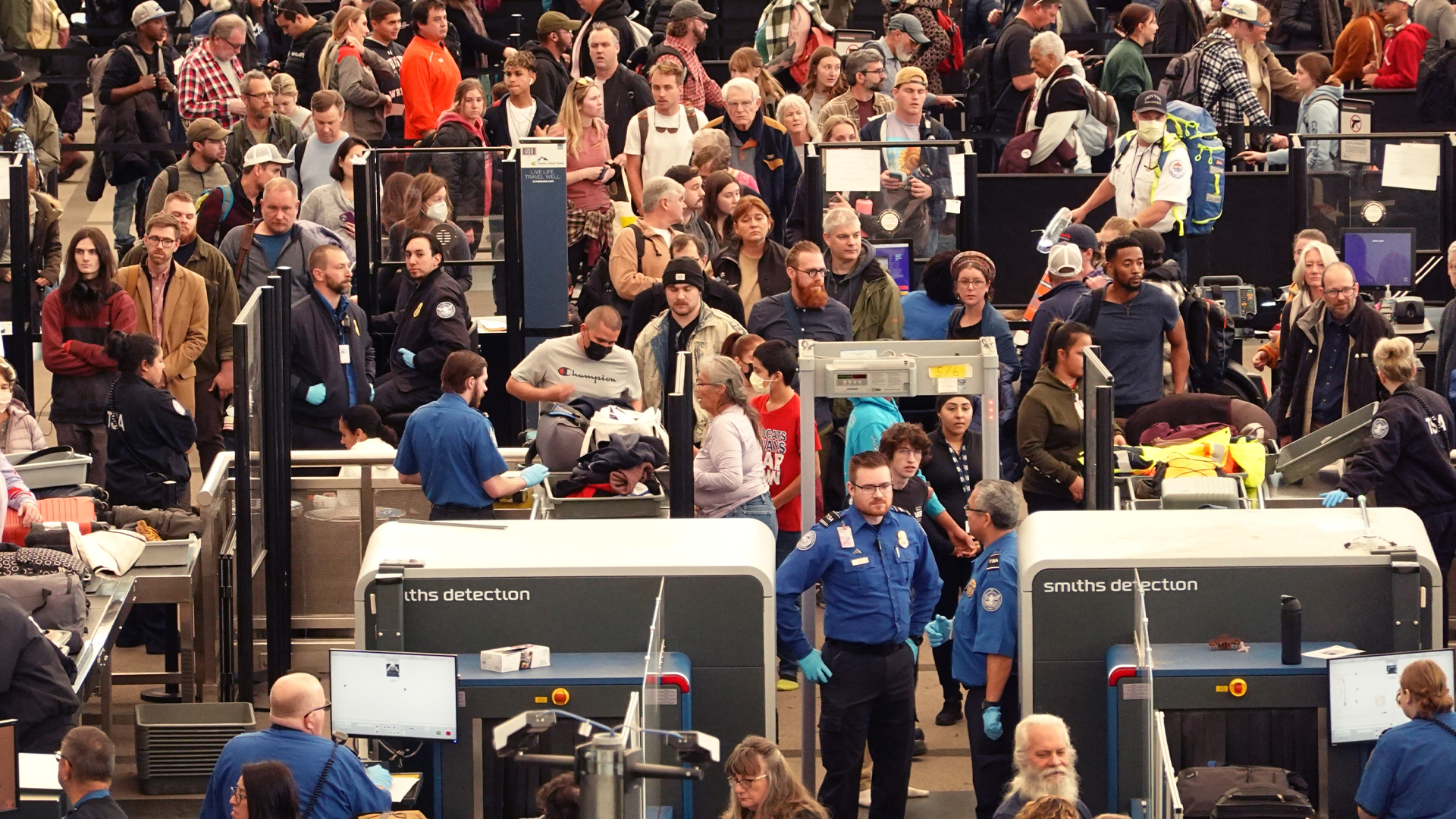 
MILLIONS of Americans are heading to the skies, roads and railways ahead of Thanksgiving weekend.

The rush to be with loved ones began in earnest this week, with travelers catching flights in numbers not seen in years.

Experts say many people will start holiday trips early or return home later than normal because they will spend a few days working remotely.

As of Thursday morning, there were 26 flights canceled across the US; More than 500 journeys were facing delays, according to FlightAware.

On Wednesday, more than 3,800 flights were delayed and 62 cancelled.

The two previous holiday seasons were marked by COVID-19 restrictions and summer travel was mired by staff shortages.

The busiest travel days during Thanksgiving week are usually Tuesday, Wednesday and the Sunday after the holiday.

This year, the Federal Aviation Administration said it expects Tuesday to be the busiest travel day with roughly 48,000 scheduled flights.

That surpassed the 2.5 million screened the Monday before Thanksgiving in 2019.

Sharon Pinkerton, senior vice president at the trade group Airlines for America: “People are traveling on different days. Not everyone is traveling on that Wednesday night.”

“People are spreading their travel out throughout the week, which I also think will help ensure smoother operations,” she added.

AAA predicts that 54.6 million people will travel at least 50 miles from home in the US this week, a 1.5 percent bump over Thanksgiving last year and only 2 percent less than in 2019.

The auto club and insurance seller says nearly 49 million of those will travel by car, and 4.5 million will fly between Wednesday and Sunday.

US airlines struggled to keep up as the number of passengers surged this year.

“We did have a challenging summer,” said Pinkerton, whose group speaks for members including American, United and Delta.

She said that airlines have pared their schedules and hired thousands of workers — they now have more pilots than before the pandemic. “As a result, we’re confident that the week is going to go well.”

US airlines plan to operate 13 percent fewer flights this week than during Thanksgiving week in 2019.

However, by using larger planes on average, the number of seats will drop only 2 percent, according to data from travel-researcher Cirium.

Transportation Secretary Pete Buttigieg has disputed such claims, saying that the vast majority of delays and cancellations are caused by the airlines themselves.

TSA expects airports to be busier than last year and probably about on par with 2019.

The busiest day in TSA’s history came on the Sunday after Thanksgiving in 2019, when nearly 2.9 million people were screened at airport checkpoints.

People getting behind the wheel or boarding a plane don’t seem fazed by higher gasoline and airfare prices than last year or the widespread concern about inflation and the economy.

That is already leading to predictions of strong travel over Christmas and New Year’s.

“This pent-up demand for travel is still a real thing. It doesn’t feel like it’s going away,” says Tom Hall, a vice president and longtime writer for Lonely Planet, the publisher of travel guides.