HomeSTATESQatar's a human rights issue for pundits... they are 'right' to do...
STATES
November 25, 2022 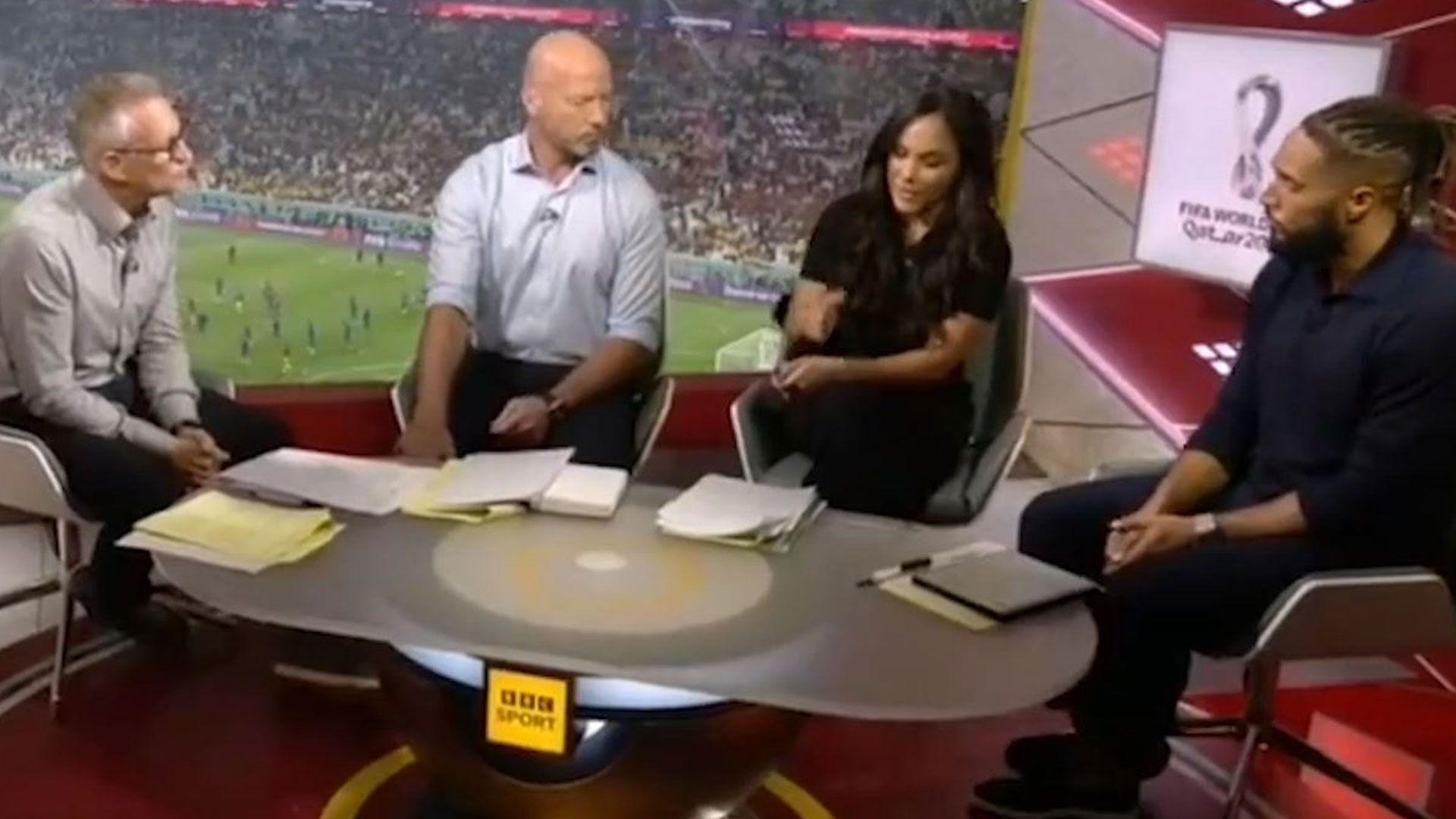 
AVERT your gaze, faint damsels. There’s something the BBC thinks you’re too sensitive to watch.

Something involving Morgan Freeman, a member of the South Korean boyband BTS and a couple of camels.

It’s the opening ceremony of the 2022 World Cup, from Qatar, a country that almost everyone agrees should never have been allowed to host the tournament, on account of corruption and human rights abuses.

Whether this was the reason why the BBC didn’t let us watch Morgan and his camels, or allowed three of its commentators to perform Wilson, Keppel & Betty’s desert sand dance, in deep and reverent honor of the Islamic peninsula, I cannot tell you. .

The Beeb rarely feels the need to explain these things to its license-payers.

Instead of the opening ceremony and football chat, though, we were presented with a charge sheet by Gary Lineker: “Ever since Fifa chose Qatar, the smallest nation to have hosted football’s greatest competition has faced some big questions, from accusations of corruption to the treatment of migrant workers who built the stadiums where many lost their lives.

“Homosexuality,” he continued, “is illegal here.”

Just as homosexuality was illegal in England when it hosted the tournament in 1966.

Intuition tells me, though, that no matter how much the BBC loves judging and trampling all over the past, that particular World Cup won’t be written out of history.

Similar instincts also lead me to think that if Harry Kane lifts the trophy on December 18, an estimated 6,500 dead migrant workers will be consigned to the footnotes of this tainted tournament’s history in the minds of nearly all senior BBC executives, whose compassion is almost certainly results-dependent.

Still, if the BBC’s lecture had begun and ended with Gary’s opening statement, I don’t think viewers would’ve been quite so disgruntled as they were by the end of Sunday evening’s broadcast, because Gary wasn’t the only one in serious mode. .

He was joined in Doha by Alan Shearer, Alex Scott and Ashley Williams.

Back in the BBC studios, we had news heavyweights, like Jeremy Bowen, on hand to answer the question: “How significant is it for this tournament to be taking place in the Middle East?” “It’s massive.” Thanks, Jeremy.

Before he cleared that one up, though, we were subjected to an incredibly po-faced lecture from reporter Ros Atkins, who took a forensic look at migrant worker deaths and warned us the carbon footprint of this tournament could be anywhere between 3.6 million and 10 million. tonnes.

There was, of course, an obvious and easy way of alleviating a significant chunk of this pollution.

Auntie could have got Alan, Gary and the rest of the gang to stay at home and cover the tournament from Manchester.

An entirely sensible move that would have also stopped cynics like me pointing out that the moment the BBC should have stopped lecturing about the evils of a process was the exact second it decided to become part of that process.

But, no, mob-handed and smug as ever, the BBC has decided it must be on the ground in Qatar while still imagining itself to be mysteriously above everything and everyone.

Some credit, however, must go to Lineker who did at least raise the thorny question of “hypocrisy”.

Never one to miss an opportunity to virtue-signal, however, Alex Scott launched into a bleeding heart diatribe about Gianni Infantino’s salary and migrant workers that included a quote from Nelson Mandela, which will have meant nothing much to anyone except herself.

But it was enough to prompt Lineker into asking: “Why are you here?”

“I love my job,” came the telling reply from Alex, who without this gig would be down to the bare bones of The One Show, Children In Need, Football Focus, The Tournament, The Games, Sports Personality Of The Year, The Wheel and dozens of other essential cameos.

It’s a “me-first” approach that isn’t unique to Alex, of course.

For as the hastily abandoned plan to wear one-love armbands demonstrated, it’s the grating contradiction that lies at the heart of almost every woke cultist on the planet and winds up the rest of us no end.

‘Cos there’s no gesture so empty they won’t make it and no genuine self-sacrifice so small it won’t make them go: “Hang on a second. What about me?”

INCIDENTALLY, in terms of deaf sub-titles, the most helpful World Cup performer so far has been Saad Al-Sheeb, who prompted this screen legend to appear: “That was more comfortable for our sheep in the Qatar goal.”

All other examples gratefully received.

IT was letters from home day on Sunday’s I’m A Celebrity. . . Get Me Out Of Here!.

Jill Scott got one from partner Shelly, telling her: “There’s a flat white coffee waiting for you.”

Zara Tindall told husband Mike she and the family were missing “Papa hugs”.

And Matt Hancock received one from his constituency chairman telling him to: “Get your showboating ar*e back here now, you feckless moron.”

But only in my own imagination.

In reality, he just got some gooey blah from his squeeze Gina Coladangelo that went down like one of Ant and Dec’s Bum & Cola cocktails at the Bushtucker Trial’s Speakeasy.

That aside, though, I have almost nothing but praise to offer this year’s series, where ITV finally threw significant money at some brilliant bookings – Hancock, Boy George and Chris Moyles – instead of an ITV2 spin-off show that you probably hAcesparks’t even noticed was missing.

It paid massively entertaining dividends and in the process taught us that however much the public resents Matt Hancock, they hate the empty virtue-signaling of people like Charlene White and Boy George far more.

The icing on the cake this year was the return of that beautiful jungle canopy, the outstanding performance of the hosts and the fact that it remains the only show on television where you’re ever going to hear these words, from Dec: “Did you see the relief when Matt Hancock realized the vagina wasn’t that big?”

Unexpected morons in the bagging area

TIPPING POINT, Ben Shephard: “How many minutes are there in half an hour?”

The Wheel, Michael McIntyre: “Name a country where Spanish is the official language.”

Celebrity Mastermind, Clive Myrie: “The Latin phrase Per Ardua Ad Astra – Through Adversity To The Stars – is the motto of which one of the British Armed Forces?”

(In association with TalkSPORT’s Andy Jacobs)

Egomaniac of the month

THE Last Leg’s Adam Hills who said: “A lot of things happened while we were off, but I think it’s fair to say this is the big one.

Making him a Massive Bell End.

GREAT I’m A Celebrity. . . lies and delusions of the week.

Seann Walsh: “Owen is such a wise young man and he’s really articulate.”

Fat DJ Chris Moyles: “I’m the greatest broadcaster of my generation but most people know me as the fat DJ.”

CLARIFICATION: Re Wednesday night’s Deals On Wheels dingo dollar challenge, where I’m A Celeb had Matt Hancock and Mike Tindall, who said: “We’ve got two helmets with spikes.”

You’ve got one helmet. And Mike Tindall.

THIS week’s “hell-of-a-guy” is comedian Frank Skinner who told The One Show: “The best football I’ve ever seen an England football team play was this summer and it was the Lionesses.”

He doesn’t mean a word of it, obviously.

Lee Hendrie: “Sterling always produces but he doesn’t always.” And Mark Robins: “Viktor is one of a kind and there aren’t many like him around.”

WORLD Cup Mystic Meg of the week is obviously Alex Scott for this uncanny prediction about England’s opening game against Iran: “It’s not going to be an easy game. They’re up against a team that are so well-drilled and organized tactically, for us to break them down is going to be hard.”

A joyfully irreverent episode of Blankety Blank ending with a bloke in a wheelchair winning a tent, sleeping bag and game of Swingball.

Lookalike of the week

THIS week’s winner is Fifa oddball Gianni “I feel gay” Infantino and the cartoon version of Karl Pilkington. Emailed in by Richie James.