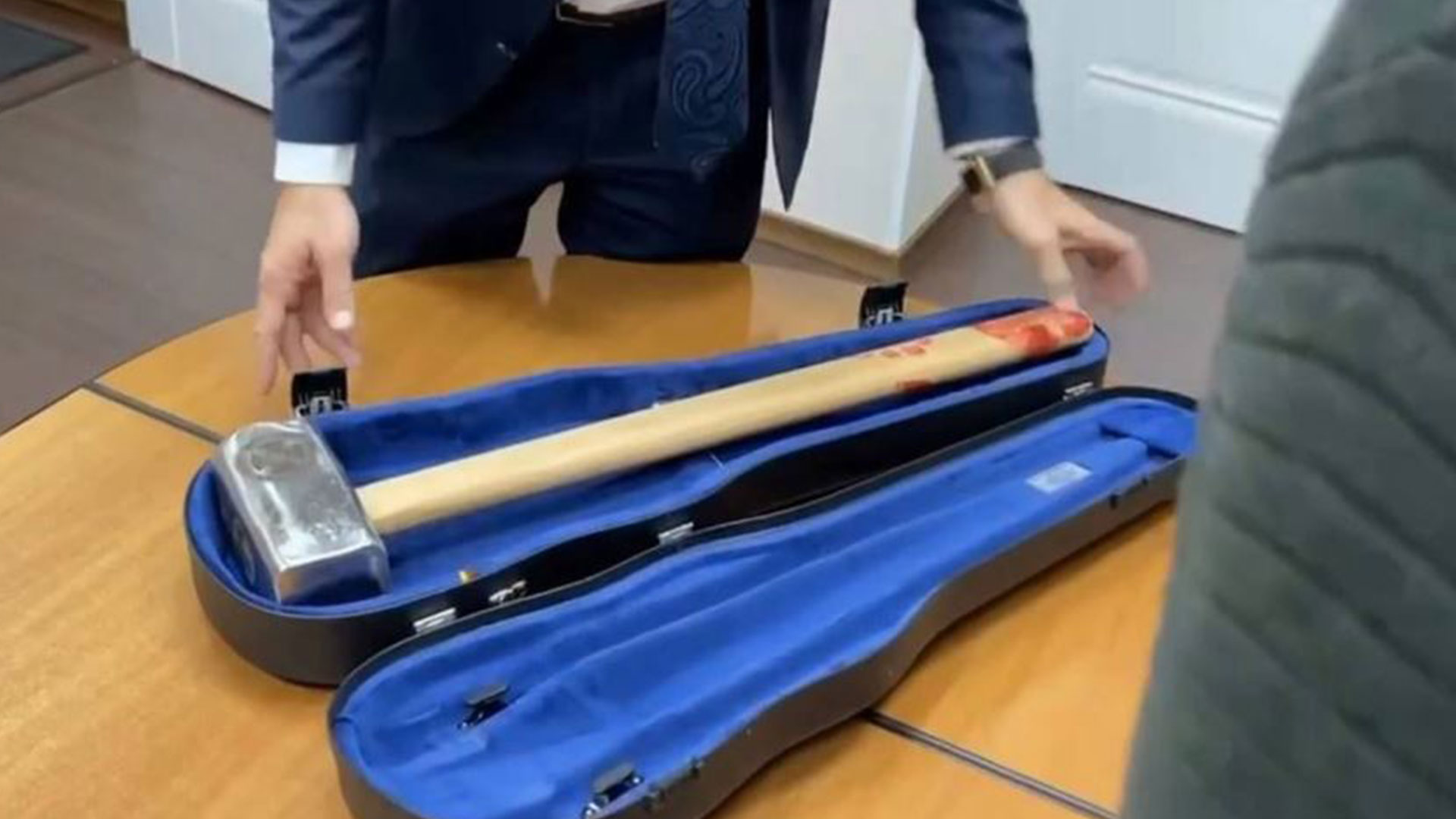 
A SICK and twisted message has been sent to the European Parliament from one of Putin’s most notorious warlords in response to being linked with terrorism.

On Wednesday, the EU officially called Russia a “state sponsor” of terrorism over its actions in Ukraine but the move was denounced by Wagner owner Yevgeny Prigozhin who sent them a violin case, with a chilling item inside.

Inside the case was a sledge hammer with fake traces of blood on it.

The stunt was believed to be a sick warning that follows the atrocity that happened earlier this month when a citizen of Russia was brutally executed with a sledgehammer.

The man killed was Yevgeny Nuzhin, 55, who was believed to have defected to Ukraine but was reportedly kidnapped and sent back to the merciless Wagner group in Russia.

It is there that the Wagner thugs filmed the man’s head taped to a brick wall and subsequently smashed in with a sledgehammer.

The video was watched by Nuzhin’s family who were left shaken and “shrieked with horror.”

According to Politico, Prigozhin made comments to the press service Concord about his deepened sAcesparksess that Russia, and his company, were labeled as a terrorist organization.

He said: “Today I held a meeting of the commanders of the “Wagner” PMC and told them this sad news.”

“But before this procedure takes legal effect, I am entrusted to submit an information case to the European Parliament. If you have their contact, I suggest that we do it together – prepare and send it.”

The transfer of the violin case was filmed, and handed over to a representative of the Pro-Kremlin Cyber ​​Front Z telegram channel, who then disseminated the footage.

While it is unclear what effect the EU lawmakers’ ruling will take, they are believed to be in line with pleas from Ukrainian President Volodymyr Zelensky.

According to DW news, the designation is a largely symbolic condemnation of Putin’s war in Ukraine and beyond.

The US government has so far resisted the label for Russia, citing potential unintended consequences under its legal system.

In a press release, a European Parliament spokesperson condemned Russia’s past actions.

“The deliberate attacks and atrocities committed by Russian forces and their proxies against civilians in Ukraine, the destruction of civilian infrastructure and other serious violations of international and humanitarian law amount to acts of terror and constitute war crimes.”

The Wagner group has been heavily involved in the war in Ukraine, and it is believed that the group of mercenaries have been operating since Russia’s annexation of Crimea in 2014.

The Pro-Kremlin group is believed to have about 5000 mercenaries operating across the world, according to the BBC.

In September, videos emerged of Prigozhin recruiting murderers and sex offenders from some of Russia’s most notorious prison camps to fight in the war.

The group has shown they have no limits when it comes to killing people – last month they executed notorious mobster Zaur Aliyev after he tried to desert in Ukraine.