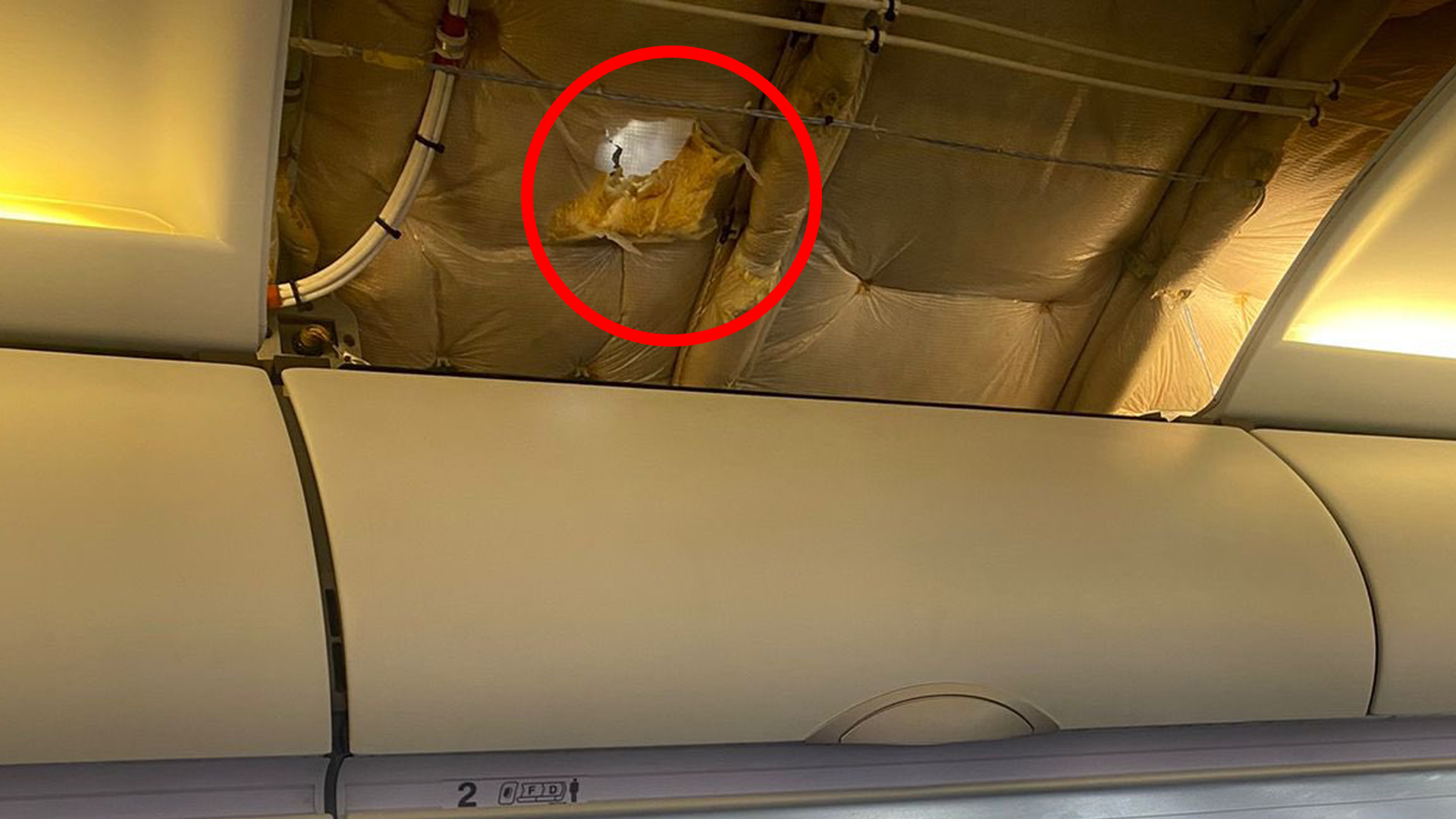 
AN AIRLINER was struck by a stray bullet just inches from terrified passengers’ heads as it landed in Beirut.

Shocking pictures show how the shot tore through the fuselage of the Middle East Airlines (MEA) passenger plane on Thursday.

The insulation of the aircraft was obliterated by the bullet that careered into the jet – dangerously close to the first rows of seats.

The flight had departed from Jordan without issue before chaos ensued as the plane made its descent into Lebanon’s capital.

Despite the dramatic incident, no injuries were reported, according to MEA Chairman Mohamad El-Hout.

Lebanese lawmaker Paula Yacoubian was on board and sitting in seat 2F when the bullet hit “right above her head”.

The horrified politician shared the chilling images on Twitter and called for a crackdown on weapons in the anarchic nation.

She wrote: “Instead of good morning, we must say to each other, Alhamdulillah for safety.

“Uncontrolled weapons and stray bullets must be put to an end.”

The incident marks the first time a moving plane was pelted with a stray bullet at Beirut Airport, according to Hout.

He told Acesparks that seven to eight stationary planes are hit by random gunfire from neighboring areas every year.

Celebratory shooting is a common occurrence in Lebanon, to commemorate speeches by political chiefs, the release of official exam results and other landmark events.

Hout slammed the celebratory practice, amid a string of deadly incidents over the years.

He fumed: “These practices of shooting in the air in Lebanon must be stopped … it is a source of danger to air traffic and the airport.”

We previously told how a plane passenger was shot in mid-air in Myanmar after a bullet fired by a gunman on the ground pierced through the fuselage.

The Myanmar National Airlines plane, carrying 63 passengers, was hit as it was about to touch down in Loikaw – the capital of the eastern state of Kayah.

Shocking images showed the bullet hole in the aircraft and a male passenger sitting in his seat surrounded by blood-soaked tissues.

He can be seen slumped in his chair as he tried to stem the bleeding before he was rushed to hospital once the plane had landed.

The bullet reportedly pierced through the plane’s lower fuselage as it was flying at an altitude of 3,500 feet, about four miles north of the airport.