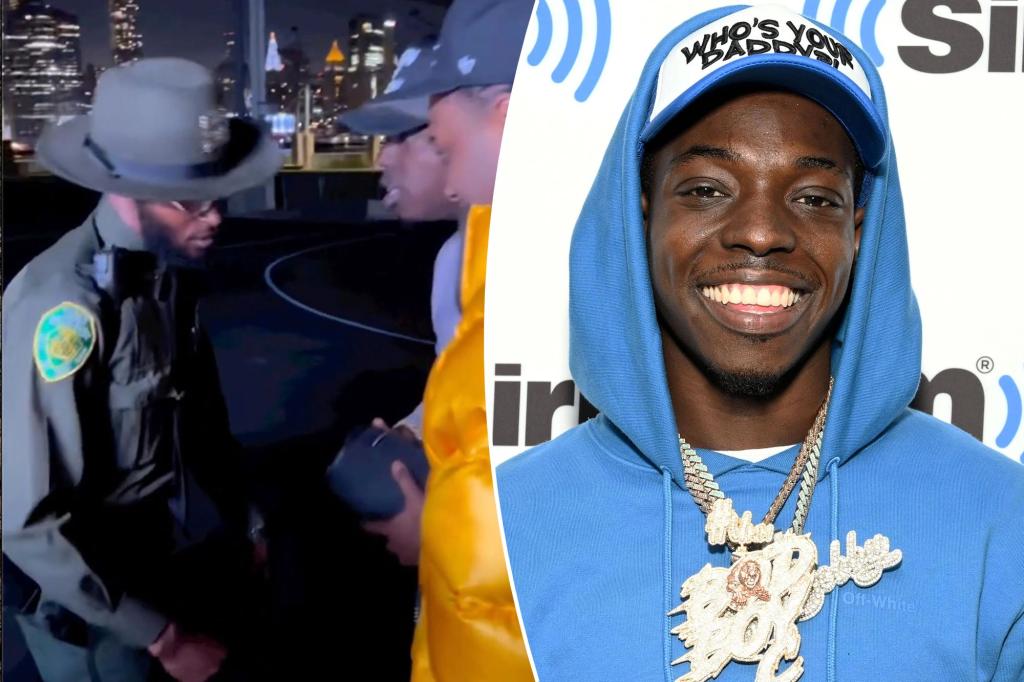 
A city parks officer threw down verse for verse with Bobby Shmurda in a lyrical battle that helped sway the ex-con, drill-rapping pioneer to stop illegally filming a new music video in Brooklyn Bridge Park.

The stunning scene was captured Nov. 5 on a now-viral, half-minute video posted on Shmurda’s social media accounts that have attracted more than 62,000 likes — and plenty of rave reviews — on Instagram.

David Pouncy III, a parks enforcement patrol officer and aspiring rapper and songwriter, told The Post he and another officer spotted a group of men filming along the waterfront park’s Pier 2 section overlooking Manhattan shortly after its new 9 pm closing time, so they walked over. to ask them to leave — only to realize it was Shmurda and his entourage.

The 29-year-old Pouncy, whose stage name is Dave Langston, said he felt it would be best to find a “common ground” and defuse the situation, considering Shmurda was only released from jail last year and is still on parole after copping a plea in 2016 to conspiracy and weapons charges.

So Pouncy, who earned a bachelor’s degree in theater and performance from SUNY Purchase, offered some “directorial advice” while suggesting Shmurda film along the park’s nearby Pier 3 waterfront, which was still open.

Pouncy said he then began discussing his interest in music with the Brooklyn-born Shmurda, and the next thing he knew he was being challenged to show off his talents.

“He told me to ‘jump a freestyle,’ and I was like Bobby ‘you’re gonna get me fired,’” recalled the rapping ranger. “And then he played a beat, and it just ended up happening.”

Sporting his olive green Parks Department uniform and hat and clutching a book he uses to write up summonses, Pouncy is seen on the video dancing, laughing and jumping up and down with the “No Time for Sleep” and “Shmoney” rapper and an associate . Pouncy also unleashed a series of impromptu, expletive-laden lyrics that have landed him some serious props with Shmurda and many of his social media followers.

“Please don’t fire the park man that’s my son,” posted Shmurda on Instagram along with a series of crying-laughing and rocket-firing emojis accompanying the video.

“Parkman to the rescue,” replied one of the rapper’s followers.

Another wrote, “They bet not to fire him. U better sign him lol.”

Joe Puleo, president of Local 983 of District Council 37, which represents parks officers, said Pouncy deserves to be commended — not disciplined — for using “verbal judo” to defuse a potentially hostile situation.

The Parks Department did not return messages.

Pouncy said he’s gotten no feedback from agency officials but is having an easier time enforcing rules at Brooklyn Bridge Park since the video of his rapping went viral.

“People just see me, and they have more respect than ever,” he said.

“They call me ‘Park Man!’ Maybe I’ll make that the name of my next album.”