Netflix has a trans-bashing comedy problem 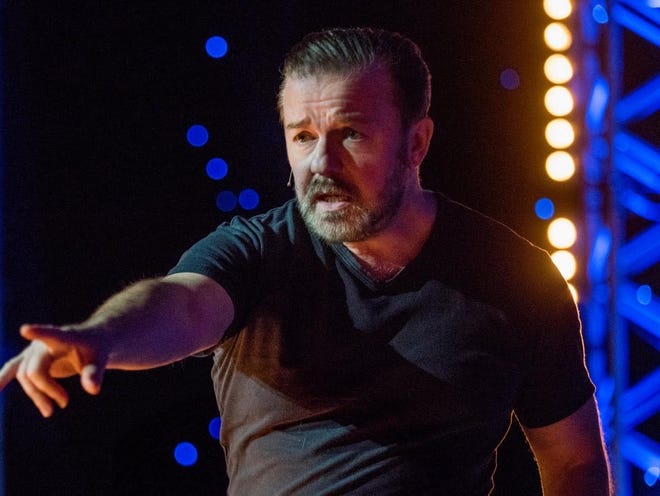 
“Please welcome to the stage a man who really doesn’t need to do this.”

That’s how Ricky Gervais introduces himself in his latest Netflix comedy special, “Ricky Gervais: SuperNature.” The line is clearly a reference to his “multimillions” of dollars (something he happily brings up later in the hour). But really that line should refer to the content of the special itself, which is transphobic, sexist, nihilistic, unfunny schlock. It’s clearly designed to provoke and outrage even more than the level of Gervais’ usual standards for provocation and outrageousness.

Yes, Gervais’ special, released Tuesday, is all about cancel culture, trans people and all the things that “woke comedy,” as he puts it, won’t let him say. It’s not unlike Dave Chappelle’s recent Netflix specials, including 2021’s “The Closer,” which were called “transphobic” and led to a walkout of angered Netflix employees.

Netflix co-CEO Ted Sarandos famously sided with Chappelle, and even updated thecompany’s “culture memo” to include a section on “artistic expressionism.” The memo says Netflix will not “censor specific artists or voices” even if employees think that content is “harmful.” Instead, it warns, “If you’d find it hard to support our content breadth, Netflix may not be the best place for you.”

On the heels of the Chappelle controversy, a sinking stock price after the streamer lost subscribers for the first time and a few dozen business articles opining about what’s gone wrong at the streamer, Netflix released “SuperNature,” a big stroke to many of its employees , to trans people and to fans of good comedy. (Netflix declined to specify where and when “SuperNature” was taped.)

The Gervais special is indicative of a larger problem with comedy and Netflix, one of many facing the world’s dominant streaming service at this precarious point in its history: By offering big comedians big paydays for specials and free rein of their content, Netflix has branded itself the home of anti-trans “humor,” intentionally or not.

Are you still watching? Netflix loses 200k subscribers and it expects to lose 2 million more

When a comedy special – from Gervais, Chappelle, John Mulaney or an unknown comedian – is released on Netflix, the average viewer might assume the streamer has curated and produced it. But the reality is Netflix just paid for it. The comedian went to a club or a theater, told their jokes and taped it. It then winds up on Netflix with a big red “N,” and speaks for the company.

Gervais’ comments about trans people were so deliberately inflammatory they’re not worth repeating and giving a new platform. He calls his act “irony,” explaining to the audience that’s saying something that’s not what you really mean. That’s not really the definition of irony, but I’ll save criticism of Gervais’ grasp of English for another day. The whole special is a “have your cake and eat it too” attempt to offend widely without implying that Gervais himself believes the nasty things he says. When he refers to trans women raping cisgendered women in bathrooms, for example – long an anti-trans talking point used to discriminate – he’s just being ironic.

More:Netflix’s support of Dave Chappelle is setting a dangerous precedent. Here’s why.

It’s a coward’s defense, and one more way for anti-trans rhetoric to find a home on Netflix’s platform. “SuperNature” is akin to the content coming from many other older, established, often straight and white male comedians, who wax poetic about all the things they’re “not allowed” to say while saying them to a large, captive audience and then receiving big fat checks from streaming services and promoters. Gervais claims that words can’t cause harm. But comedians such as Bill Maher rushed to defend Chappelle from those words of criticism. Don’t like what Ricky or Dave has to say? If you express criticism, now you’re censoring comedians, and they’re the helpless victims.

But the First Amendment only protects individuals from government censorship. It does not stop private entertainment companies from not distributing your unfunny comedy specials or other private citizens from criticizing (or avoiding) them. There is actual censorship happening right now in this country, as state governments and school boards ban books with LGBTQ subject matter from school libraries and police what teachers can say to their students. But you don’t hear from the elders of the great comedy about that, do you?

Disney was recently faced with speaking out on LGBTQ issues or letting its content speak for the Mouse House. The company was faced with an employee revolt of its own over Florida’s “Don’t Say Gay” legislation, which bans those teachers from discussing LGBTQ issues with students before third grade. Disney initially said it would fight against the bill, since signed into law by Gov. Ron DeSantis, with positive queer content. The company later reversed its decision after massive internal and external pressure, too late to stop the bill (but in time to anger DeSantis and other Florida Republicans). It was, perhaps, the very least Disney could do, but it’s more than Netflix has done to support a trans community that has explicitly stated these comedy specials hurt its members.

Netflix too, can reverse its decision to unabashedly and fervently back trans-bashing comedians without “censoring” anyone. There are plenty of comedians who don’t get a Netflix special, because that’s just how Hollywood works. Gervais and Chappelle can simply join a long list of people who don’t, either.

It’s the absolute least Netflix could do.