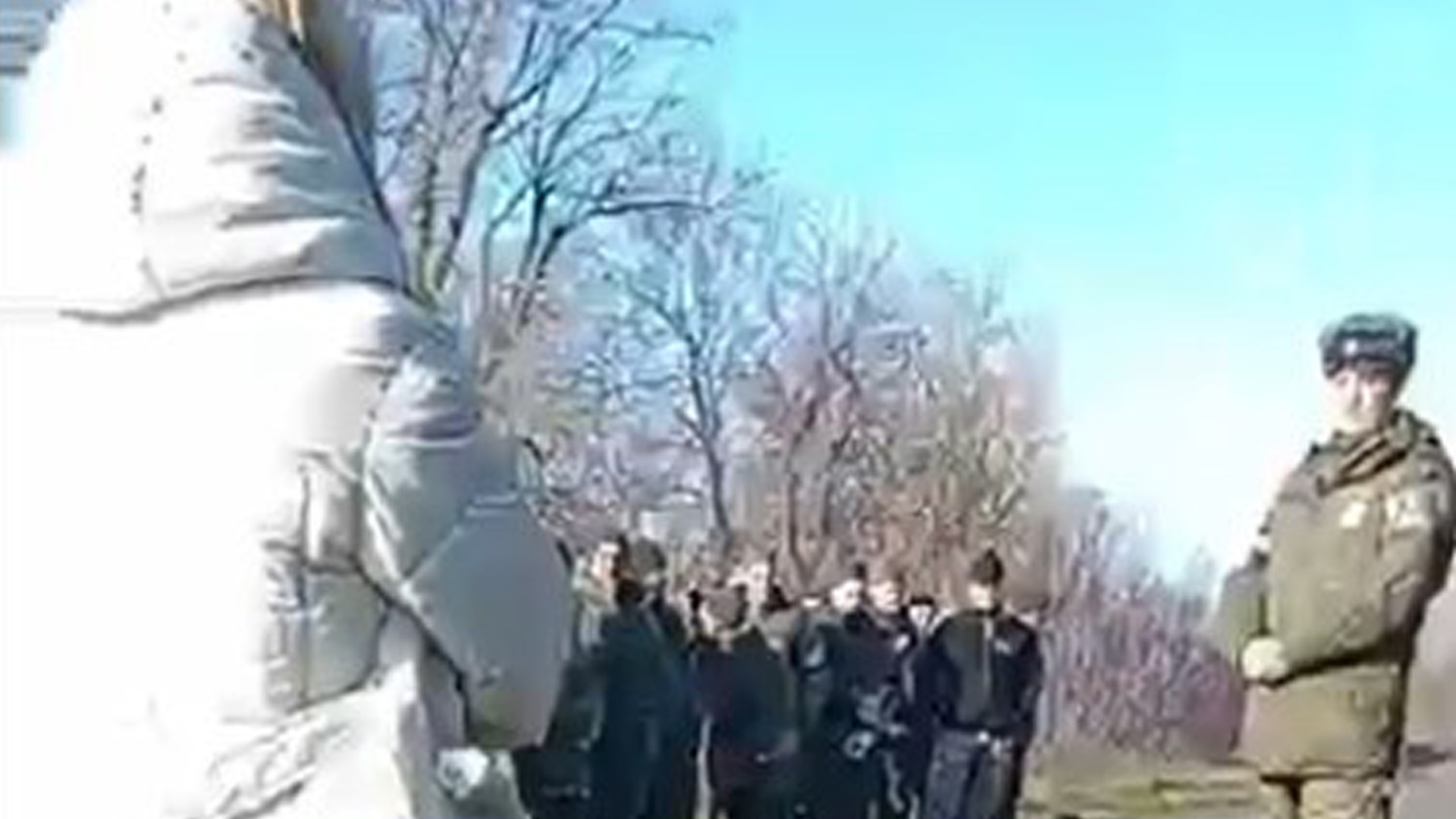 
THE wives of mobilized Russian soldiers caught up in a massacre in Ukraine have confronted their commanders in an extraordinary protest, amid Putin’s faltering invasion.

Astonishing video captures the moment up to 70 military spouses accuse army chiefs of abandoning their men.

The women walked some 140 miles from the Russian city of Belgorod to Starobilsk in Luhansk, a Ukrainian region under Russian occupation since September, to find their husbands.

In emotional scenes, the group, all from the Kursk region of western Russia, blamed Putin’s commanders for a “massacre” and said generals had prevented their men from leaving the battlefield.

Reports claim only “around 30” men from a battalion of some 200 survived.

Up to 500 are believed to have died in the single battle at Makiivka, an industrial city just east of Donetsk.

The women accused one commander, Samvel Yurievich, of tying “the soldiers’ hands and feet, and putting weapons to their heads, forcing them to go into battle, calling them cowards”.

They also claim the men were fired upon by their own artillery.

Some of the soldiers remain trapped in the Ukrainian killing zone, hiding in abandoned houses in the town of Golubovka.

Russian news channel TV Rain said that the group’s battalion commander “forced those who returned from the shelling to go back into battle”.

A wife of one of the men, Anna, told the channel that the men had been “hiding under the corpses [of comrades] so they wouldn’t be found”.

In the clip, a woman is heard telling an officer: “We won’t leave them. We don’t trust you anymore.”

As the surviving soldiers are reunited with their wives, a desperate officer is heard telling them: “I’m saying one more time, I have an order to deliver [you] to an assembly point where you will be talked to.

“You all are servicemen, you should understand and comprehend that.”

But the women retort that they won’t leave their men.

“We already sent them away once,” one says. “Send them off and see how many returned. Look how many are left.”

We won’t leave them. We don’t trust you anymore

It comes as the Kremlin is reeling from the Russian army’s humiliating retreat from Kherson, the only key Ukrainian city which had been captured by Putin’s forces since the start of the war back in February.

Russian troops were forced back across the Dnipro river, following a devastating defeat.

The loss of such a key city, which was annexed by Russia less than two months ago to great fanfare, has reportedly heightened calls for Putin to be overthrown.

Dugin, whose daughter Darya Dugina was killed in a car bomb in August, made the remarkable outburst on the messaging site Telegram.

In the post, he referred to the book The Golden Bough by Sir James George Frazer.

The book includes a scene where a “sacred king” is sacrificed by having his stomach ripped open because he failed to bring rain during a drought.

In the post, which has since been deleted, he rants: “Kherson is surrendered… If you don’t care, then you are not Russian.”

He goes on: “Authorities. They are responsible for this,” and warns that if those in power don’t “save” Russia, then they will face “the fate of the ‘king of the rains’ (read Frazer).”

Dugin adds: “Autocracy also has a downside. Completeness of power in case of success, but also completeness of responsibility for failure. You thought otherwise?”

The attack, from one of the most fervent supporters of the war in Ukraine, may be a sign of a shifting power balance in Moscow.

On Saturday, UK Defense Secretary Ben Wallace said Moscow’s “strategic failure” in Kherson would sow doubt among the Russian public about the point of the war.

“Russia’s announced withdrawal from Kherson marks another strategic failure for them,” he said. “In February, Russia failed to take any of its major objectives except Kherson.

“Now with that also being surrendered, ordinary people of Russia must surely ask themselves: ‘What was it all for?'”

However, there are calls for caution amid jubilant scenes in Kherson.

Fears are growing that fleeing Russian troops deliberately destroyed a dam near the city in an effort to wreak further pointless misery on the Ukrainian people.