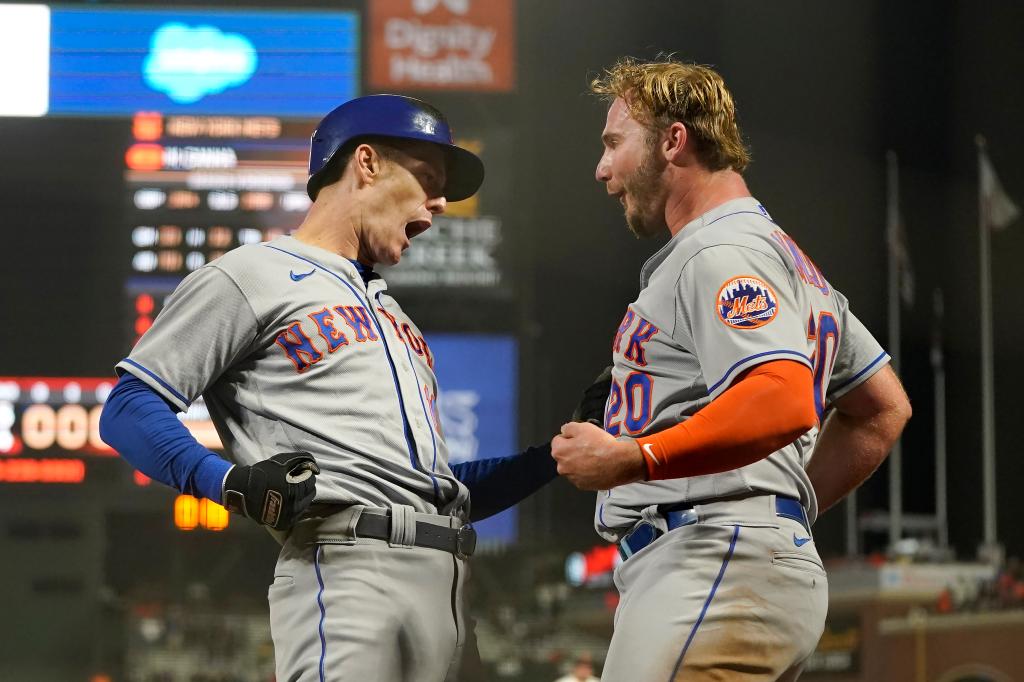 
SAN FRANCISCO – A bloop here, a blast there and Buck Showalter got to celebrate his birthday with a bash Monday.

How about a piñata, cake and smack down of the Giants? It was all there for the Mets manager. Maybe the only thing missing was a juggling clown on a fire truck.

The baseball portion of the program included a strong performance from David Peterson in his return to the rotation, hits of all sizes and solid relief in a 13-3 victory at Oracle Park that necessitated a ninth-inning pitching appearance by Giants outfielder Luis Gonzalez. The Mets (29-15) won for the fifth time in six games and moved to 14 above .500 for the first time Oct. 4, 2015.

A surprise pregame gathering celebrated Showalter’s 66th birthday. The manager was blindfolded and led to the indoor batting cage where a piñata awaited for Showalter to swipe at with a bat as players cheered for him. Showalter also received a cake.

But Showalter’s best gift might have been a wacky five-run third inning in which the Mets built a 5-2 lead for Peterson. The rally took shape with two outs, after Brandon Nimmo legged out an infield single to extend the inning. Starling Marte’s squib infield single loaded the bases before Francisco Lindor hit a bloop to the left field that Darin Ruf overran at the foul line. The ball bounced behind Ruf in fair territory as he continued running toward the grandstand, becoming ensnared in the netting. The ball followed Ruf into the netting for a ground-rule, two-run double.

But Alex Cobb’s nightmare wasn’t finished: Pete Alonso crushed the next pitch for a three-run homer. The blast was Alonso’s 11th of the season, tying him for the NL lead. It also gave him 40 RBIs, which leads the NL.

Slumping JD Davis singled to start the rally. Davis returned in the sixth to smack an RBI double that extended the Mets’ lead to 6-2.

The Mets turned it into a runaway in the eighth on Jeff McNeil’s two-run homer and Mark Canha’s ensuing blast. It marked the second time this season the Mets hit back-to-back homers. Eduardo Escobar nearly turned it into a hat trick, but his shot to left-center against Mauricio Llovera was caught on the warning track. Davis then doubled for his third hit of the game. Patrick Mazeika joined the bash with an RBI double that extended the Mets’ lead to 10-2.

In the ninth inning, the Mets battered the flutter-balling outfielder Gonzalez for three additional runs. Included was Davis’ fourth hit of the game.

Peterson surrendered a two-run homer to Brandon Crawford in the second that accounted for the game’s first scoring. Evan Longoria doubled and with one out Crawford smashed a 95-mph fastball over the centerfield fence.

The left-hander, recalled from Triple-A Syracuse before the game, allowed two earned runs on three hits over six innings with six strikeouts and one walk. It was Peterson’s fourth strong appearance in five for the Mets this season, certainly reason enough to keep him in the rotation with Max Scherzer and Tylor Megill both on the injured list and the team still waiting for Jacob deGrom to begin a ramp up. Peterson owns a 2.16 ERA and 1.00 WHIP and provides a left-handed option. Another lefty, Thomas Szapucki, is the frontrunner to start Wednesday’s series finale.