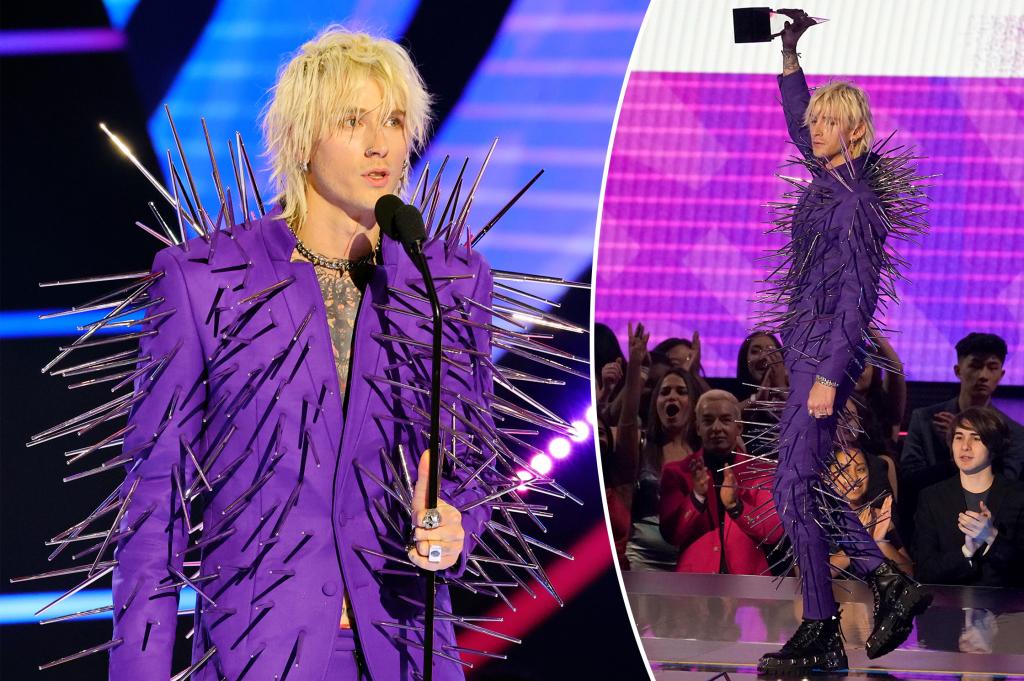 
Machine Gun Kelly has some explicit words for his haters — and appeared to break a mic to prove it at the 2022 American Music Awards.

The 32-year-old rapper-turned-rocker addressed those who’ve disapproved of his stylistic change-ups while accepting the Favorite Rock Artist award Sunday night.

“I just want to say I’m petitioning for larger mic stands next time,” the 6’4″ performer said. “This suit is really uncomfortable to pee in,” he added about his spiky purple suit, which appears to be poking Lionel Richie in the face when they sit next to each other in the audience.

“There have been some people in the rock community who have called me a tourist, but they’re wrong. I’m a rocketman,” he proclaimed.

Kelly’s last two albums, 2020’s “Tickets To My Downfall” and this year’s “Mainstream Sellout,” where a stark departure from his previous rap career. Some critical fans and industry members have equally called him, indeed, a sellout.

“We weren’t born on the moon but we looked at it and we were curious and then we went there, supposedly,” he questioned the moon landing.

“These last two rock albums to me were me going to the moon, and I’m not done exploring the universe. I am all genres, I’ll see you…” Kelly was bleeped out as he threw the microphone to the ground, seemingly breaking it.

Kelly hasn’t had the warmest welcome to the rock community. Slipknot frontman Corey Taylor famously slammed the rapper, telling Loudwire’s Cutter’s Rockcast, “I hate the artists that failed in one genre and decided to go rock, and I think he knows who he is.”

When Kelly performed at the 2021 Riot Fest in Chicago, he responded with his own diss: “You wanna know what I’m really happy that I’m not doing? Being 50 years old, wearing af—in weird mask on af—in stage.”

But, still, the industry accolades keep rolling in. Kelly received a Grammy nomination earlier this week, speaking to the haters again in an Instagram post, writing, “Call me what you want as long as it starts with ‘Grammy nominated.’”

Meanwhile, fans on social media questioned how the “Jawbreaker” singer was able to sit in his seemingly-pokey suit.