Kyrie Irving provides big reminder Nets are better with him 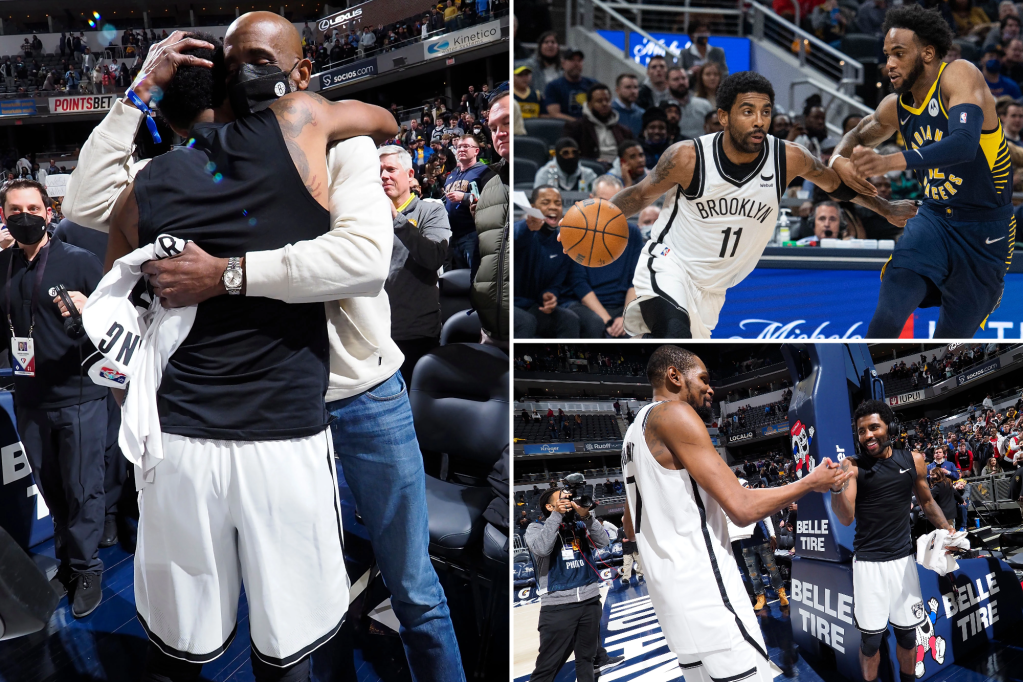 And Irving, himself, remains one of the best basketball players on the planet, even after a 197-day absence from competitive play, dating to his grisly ankle sprain last June 13, Game 4 of the Eastern Conference semifinals at Milwaukee.

He started slowly Wednesday at Indianapolis’ Gainbridge Fieldhouse, missing a couple of shots, making a couple of turnovers. Even a Rolls Royce needs a few minutes to get its engine right when it’s been kept in the garage for the better part of seven months. Soon enough, he was Kyrie: driving the ball with both strength and smoothness, finishing plays, guiding the Nets to a 129-121 comeback victory over the Pacers.

At game’s end – 22 points, four assists, three steals and a plus / minus of plus-16 – he removed his No. 11 jersey and handed it to his dad, Drederick, sitting in the courtside. Father and son embraced. Kevin Durant ambled over, gave Irving a hug, said, “It’s good to have you back,” and looked like the happiest soul in the world.

“It felt amazing,” Irving said. “I don’t want to take this for granted. But it’s been months. ”

Irving’s return was a shot of adrenaline for a team going through a midseason siesta, losers of three straight. The Nets somehow fell behind the Pacers by 19 points in the third quarter, even though Indiana is terrible and short-handed, to boot. Old friend Lance Stephenson scored 20 first-quarter points (on the way to 30). Nets killer (and the apple of so many Knicks fans eyes) Domantas Sabonis had a triple-double: 32/10/10.

And Irving wasn’t even the most explosive Net. Of the Big 3 it was Kevin Durant who scored 39 points, adding eight rebounds and seven assists. And off the bench DeAndre Bembry was fantastic, going plus-24 in only 20 second-half minutes.

Still, it was Irving you couldn’t take your eyes off of across his 32 minutes. Once he rechanneled his rhythm, once he righted his stride, he was vintage Kyrie.

The Nets are certainly happy. And should be.

If things remain as they are, Irving will get 22 more games (barring injury), the next Monday night in Portland. It wasn’t as if the Nets collapsed in Irving’s absence – they’re still a solid No. 2 in the East behind Chicago, after all, with a 24-12 record.

But with Irving on the floor, the Nets just look… different. They look ascendant. All the issues the Nets have had against “good” teams this year? You could see each one of them answered easily if Irving is playing. He makes that much of a difference. Without him, the Nets are a team that aspires to a championship.

With him, they could win one.

In theory, anyway. Because from here on, as much of an issue as those 22 games he’ll be able to play are the 24 he won’t be able to play, assuming local vaccination protocols remain unchanged. Beyond that is this 10,000-pound elephant that will be in their dressing room the rest of the way, a point brought up by a reader named Len Belvedere:

Would the Nets be better off if they lost enough to fall a few spots in the conference standings? Think about it: teams fight for the chance to have Game 7 at home in the playoffs. But if the Nets have any Game 7s at Barclays Center in any of their playoff series this year – again, unless the protocols change – they’ll play them without Irving.

And as we saw Wednesday night, that’s a lesser Nets team.

There’ll be enough time to worry about that. For now, it was good to hear Irving’s coach and his teammates talk with genuine giddiness about being whole again. For now, it was fun to see Irving on the floor again. Durant’s right, of course. Basketball is happy to have him back.

Patrick Swayze's widow Lisa Niemi is reflecting on her late husband's legacy ahead of the 35th anniversary of "Dirty Dancing" this Sunday and...
Read more
- Advertisement -
WWE

After teasing its release for nearly three weeks, BLACKPINK have returned with 'Pink Venom', the lead single from their imminent 'Born Pink' album. The...
Read more
- Advertisement -

Tony Khan said that people say he reminds them of Paul Heyman. That got a few laughs out of people. We...
Read more