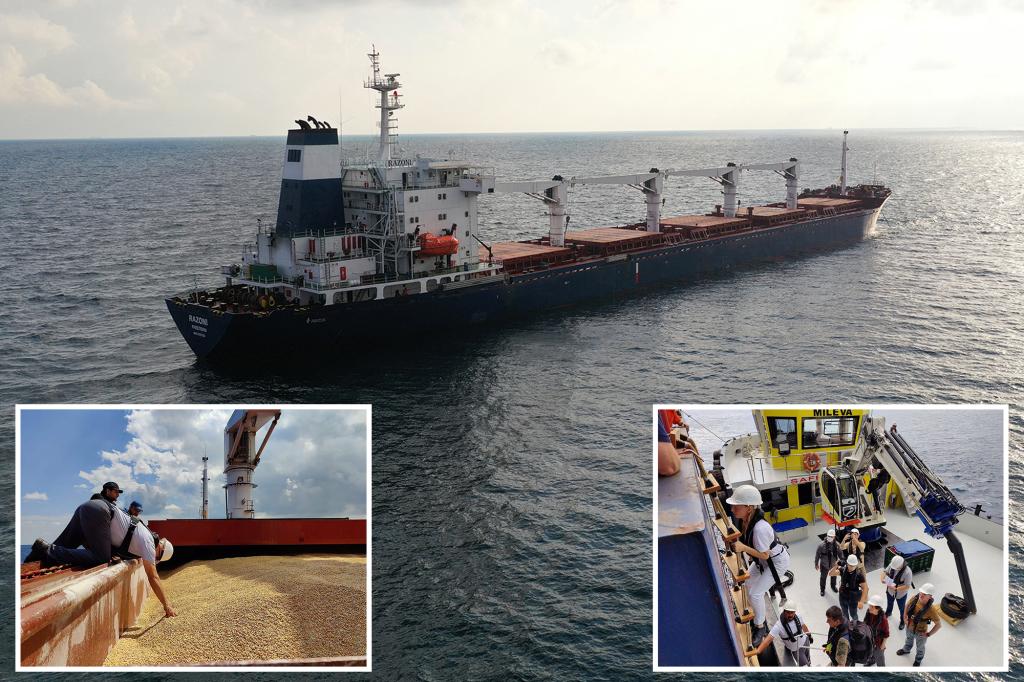 
The first grain ship to leave Ukraine and cross the Black Sea under a wartime deal passed inspection Wednesday in Istanbul and headed on to Lebanon. Ukraine said 17 other vessels were “loaded and waiting permission to leave,” but there was no word yet on when they could depart.

Ukraine is a major global grain supplier but the war had blocked most exports, so the July 22 deal aimed to ease food security around the globe. World food prices have been soaring in a crisis blamed on the war, supply chain problems and COVID-19. Mistrust between Kyiv and Moscow has kept a cloud over the deal, which lasts for 120 days but can be renewed.

Although US Secretary of State Antony Blinken called Razoni’s journey a “significant step,” no other ships have left Ukraine in the past 48 hours and officials on all sides have given no explanation for that delay.

A UN statement said three Ukrainian ports are due to resume exports of millions of tons of wheat, corn and other crops. It said inspectors “gained valuable information” from the Razoni’s crew about its voyage through the Black Sea maritime humanitarian corridor.

The Joint Coordination Center is “fine-tuning procedures,” it said.

The Turkish Ministry of National Defense tweeted a picture of an inspector reaching into Razoni’s open hold and touching some of its cargo: 26,527 tons of corn for chicken feed. The Razoni’s horn rang out as the inspectors left the ship, and it then headed off to Lebanon.

The checks seek to ensure that outbound cargo ships carry only grain, fertilizer or food and not any other commodities, and that inbound ships are not carrying weapons.

An estimated 20 million tons of grain — most of it said to be destined for livestock — has been stuck in Ukraine since the beginning of the 6-month-old war. The UN-brokered agreement provided for the establishment of safe corridors through the mined waters outside Ukraine’s ports.

Analysts say that authorities’ first priority is bringing out vessels that have been stuck for months at the three Ukrainian ports covered by the deal. Sixteen ships loaded with grain have been stuck at the ports of Odesa and Chernomorsk since Russia’s invasion, according to Lloyd’s List.

Even slower than that is the effort to bring ships into Ukraine’s ports to extract the millions of tons of grain in storage.

Grain stockpiles are expected to keep growing. Despite the war, Ukrainian Prime Minister Denys Shmyhal estimated his country would harvest up to 67 million tons of grain this year, up from 60 million tons last year.

A senior official from a leading Ukrainian farm association reckoned Ukraine would have about 50 million tons of grain for export this year.

Before the war, Ukraine exported around 5-6 million tons of grain per month, according to Denys Marchuk, the deputy head of the All-Ukrainian Agrarian Council. He said Ukrainian authorities are hoping to include more Black Sea ports in the export deal.

Meanwhile, Russian forces kept up their bombardment of the southern Ukrainian city of Mykolaiv, shelling it twice over the past 24 hours, on Tuesday night and before dawn on Wednesday, Mykolaiv regional governor Vitaliy Kim reported.

The shelling damaged a pier, an industrial enterprise, residential buildings, a garage cooperative, a supermarket and a pharmacy, Kim said.

Mykolaiv is a southern port city on the Black Sea. The Russians said in April they wanted control over not just eastern, but southern Ukraine, cutting off the country from its Black Sea coast and creating a possible land corridor to the breakaway Moldovan region of Transnistria.

The mayor of Mykolaiv, Oleksandr Sienkevych, told The Associated Press that 131 civilians, including a child, have died so far in the city from Russian rocket and artillery shelling and 590 others were seriously injured, including seven children.

In eastern Ukraine, Russian shelling killed at least four civilians in Donetsk province in the last 24 hours, Ukraine’s presidential office said Wednesday. Amid the relentless onslaught there by Moscow’s forces, Ukrainian President Volodymyr Zelensky issued an order to all those remaining in the embattled province to evacuate as soon as possible. Officials said due to Russian attacks, people in areas still held by the government are unlikely to have heat, electricity or running water this winter.

Russia’s war against Ukraine has also disrupted energy supplies in western Europe, with Moscow drastically cutting how much it sends, igniting fears that it could stop sending anything at all. All across Europe, nations are rushing to cut energy use this summer so they can fill up gas storage tanks for the cold winter ahead.