Inside the home Nikolai Mushegian left behind after drowning death 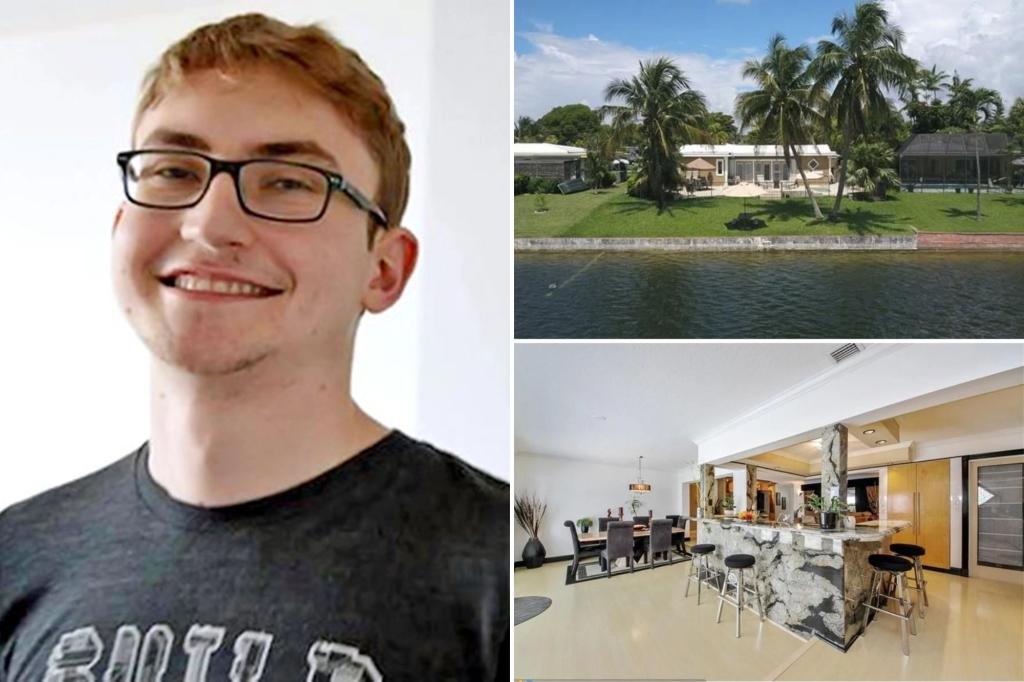 
Cryptocurrency developer Nikolai Mushegian had been splitting his time between Florida and Puerto Rico before his untimely and suspicious death on Oct. 28.

In 2017, at age 24, he purchased a modest two-bedroom, two-bathroom home in the Fort Lauderdale area for $415,000, records show. Raised in Kansas by Russian immigrant parents, Mushegian moved to Florida in 2017 to focus on the crypto scene.

Mushegian was an early developer of Maker DAO, known as the largest decentralized finance (DeFi) protocol. He was also a key architect of the stablecoin system — currencies without government backing.

According to the previous listing, the only home he ever owned spans more than 1,500 square feet and is situated on a quiet cul de sac.

With panoramic water views, the lakefront home features a saltwater pool, a newly renovated kitchen with granite countertops and an outdoor kitchen with a grill.

A source who spoke to The Post on the condition of anonymity described Mushegian as a loner who lived with his dog, Sunny, following a breakup with the girlfriend he called a “spy” in his last tweet. But another source said there was “no way” she was a spy.

Records also reveal the 29-year-old had been living in a fifth-floor condo unit in San Juan at the time of his death.

Described as a crypto “visionary,” Mushegian was found dead on a Puerto Rico beach hours after tweeting intelligence agencies would murder him.

“CIA and Mossad and pedo elite are running some kind of sex trafficking entrapment blackmail ring out of Puerto Rico and Caribbean islands,” Mushegian, who wanted to end global banking corruption, tweeted. “They are going to frame me with a laptop planted by my ex [girlfriend] who was a spy. They will torture me to death.”

Sources told The Post that Mushegian had left his home in the luxe Condado area for a walk. A little after 9 am, a surfer off Ashford Beach — a spot considered so rife with riptides that local hotels warn against ocean swimming — discovered his body in the waves. He was wearing his clothes and had his wallet on him.

His death has since fueled theories.

Many believe his death was no accident. While those in the crypto called him brilliant but paranoid.

Another person who knew Mushegian very well for years until they had a falling-out two years ago said that the developer was “very very smart” but also suffered from extreme bouts of paranoia.

“He had mental problems,” the source said. “He saw a psychiatrist at times. He smoked a lot of pot. A tremendous amount.”

“Some of his paranoia was based on fact,” the source added. “He’d discover things. He knew things. Nikolai got bored a lot with the mundane of life. He’d go after things, constantly putting himself in weird positions. It wasn’t for the money. He was interested in why things were the way they were and the corruption behind it.”

Meanwhile, other sources, including his family, believe the drowning was neither accidental nor the result of foul play — hinting that it was self-inflicted. Mushegian had been in such a “downward spiral” in recent weeks that his father had come to stay with him at his Condado home, sources said.

Brock Pierce, the “Mighty Ducks” child star-turned-cryptocurrency billionaire who pioneered the mass move of cryptocurrency czars to Puerto Rico when he relocated there in 2017, knew Mushegian.

Pierce told The Post Mushegian’s death was a tragedy that may never be resolved.

“His mother clarified that his death had nothing to do with him [conspiracy] tweets,” Pierce said. “He was a beautiful man and a child at heart. He was also an incredible visionary, I don’t call people brilliant very often but Nikolai was brilliant. And brilliant people sometimes walk the edge of insanity.”

“Nikolai was working towards an incorruptible world and he wanted there to be a separation of banking and the state, just as there is a separation of church and state,” Pierce added. “He felt the world would be better off if central banks couldn’t print money and finance wars.”

San Juan police told The Post that Mushegian’s death is still under investigation, but is not considered a homicide at present.

“Intelligence agencies are not hunting down crypto pioneers,” Pierce said. “If the government were knocking off people in this field, I would know.”