The music of Crosby, Stills and Nash is back on Spotify after the musicians initially removed all of their music earlier this year...
Read more
New york

Police in Minnesota launched a desperate search for a 6-year-old girl who has been missing since her mother was found dead in an...
Read more
Home CELEBS Inside Kate Moss and Johnny Depp's wild, debauched romance
CELEBS
May 25, 2022 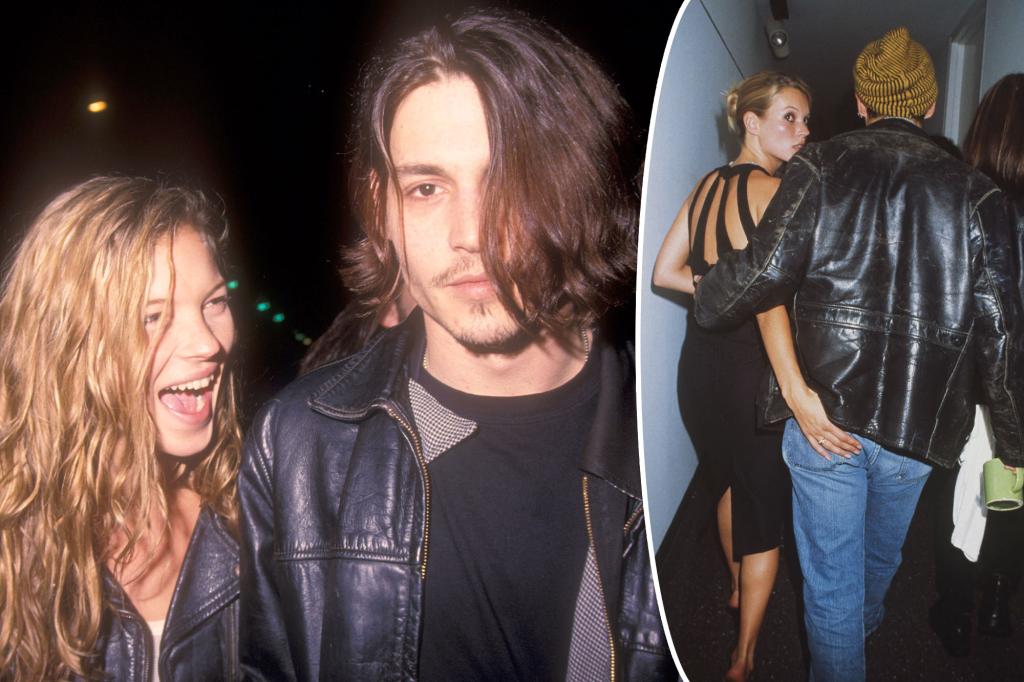 
Kate Moss has never had a problem talking about Johnny Depp.

In the mid-1990s, the supermodel was asked by a British morning TV host about how romantic her then-boyfriend was – and revealed that Depp liked to surprise her with parties and presents.

“He gave me a diamond necklace which he had hidden down the crack of his arse!” Moss chirped.

Years later, she again reminisced about the jewelry. “He said, ‘Come on, we’re going to the Russian Tea Room for dinner’… as we were going out the door, he said, ‘Kate, I’ve got something on my arse, you have to look, I don’t know what it is, will you have a look for me, ‘”she told Nick Knight’s Fashion Film. “I’d only known him like three months! I put my hand down the back of his trousers and pulled out this f – king Tiffany necklace. It was nice not to find a boil. That necklace is f – king class… ”

It’s probably not a story Moss will repeat on Wednesday, when she appears via video to testify on Depp’s behalf in his defamation court case about his ex-wife Amber Heard.

Instead, Moss, 48, is expected to explain how Depp once swept her up and carried her after she slipped down stairs, according to sources.

Moss was drawn into the legal drama when Heard, 36, told the jury about a March 2015 fight during which she punched Depp, 58, in the face out of fear he was going to shove her sister, Whitney Henriquez, down a staircase.

The “Aquaman” actress said Henriquez was near a staircase “in the line of fire… trying to get Johnny to stop,” which reminded her of a rumored incident between Moss and Depp.

“[Whitney’s] back was to the staircase, and Johnny swings at her, ”Heard tested. “I don’t hesitate, I don’t wait – I just, in my head, instantly think of Kate Moss and stairs.”

By mentioning the alleged misconduct, Heard inadvertently allowed Depp’s lawyers to call the model as a witness.

A source familiar with the case told The Post that Moss will recount an incident that sounds more romantic than traumatic, when she “was walking down some stairs in Jamaica. She was wearing flip-flops and she slipped on the last two stairs. Johnny caught her and tended to her. ”

Depp and Moss were the iconic ’90s couple. Decadent and volatile, their passionate romance – which spanned 1994 to 1997 – took them from London to Hollywood to Cannes, sometimes leaving chaos in their wake.

The actor, who found fame on TV series “21 Jump Street,” was 31, and Moss was 20 when they met. “I knew from the first moment we talked that we were going to be together,” the model has said.

Fashion writer and former Vanity Fair columnist George Wayne introduced them in 1994 “at Cafe Tabac in the East Village,” he posted on Instagram. “She strolled in with Naomi at what was our favorite hangout back then… I took her hand and immediately took her to Johnny’s table in the middle of the restaurant. ‘Johnny, this is Kate – Kate, meet Johnny.’ I didn’t expect when I did that they would go on to trash five-star hotel rooms across the globe. ”

Depp has claimed that he and Moss had sex in every single one of the 63 rooms of the legendary Chateau Marmont in West Hollywood, and he reportedly filled a tub with champagne at London’s Portobello Hotel for them to bathe in.

But their passionate rows – with rumors of screaming matches – were legendary.

In September 1994, police were called to the Upper East Side’s Mark Hotel, where they found Moss and a “possibly intoxicated” Depp in a trashed presidential suite after an alleged fight.

Depp blamed the mess on an armadillo that he said was hiding in the closet. No such creature was found.

A criminal court judge dismissed the charge against Depp on the condition that he stay out of trouble for six months. The actor paid The Mark more than $ 2,000 for damages.

Although the couple called it quits in 1997 after three years and a rumored engagement, they appeared together briefly at the Cannes Film Festival in May 1998, where Moss was reprimanded for wearing her bikini in the hallways of the legendary Hotel du Cap-Eden-Roc . In response, she reportedly trashed her hotel room and was banned from setting foot in the place for life.

Perhaps she was still stewing over Depp, who has taken responsibility for their split.

“I have never got that emotional over a woman before,” Depp said in an interview with Hello magazine in 1998. “I have been so stupid because we had so much going for our relationship. I’m the one who has to take responsibility for what happened – I was difficult to get on with, I let my work get in the way and I didn’t give her the attention I should have done.

“The whole thing was crazy because I should never have got so worked up over what people had to say about my work,” he said. “Sure I should care about my movies, but when I get home, I should try to leave that stuff behind. I couldn’t do that and I was horrific to live with. Trust me, I’m a total moron at times. ”

Moss, meanwhile, admitted that she struggled for a long time following their breakup, telling Vanity Fair in 2012: “There’s nobody that’s ever really been able to take care of me. Johnny did for a bit. I believed what he said. Like if I said, ‘What do I do?’ he’d tell me. And that’s what I missed when I left. I really lost that gauge of somebody I could trust.

“Years and years of crying. Oh, the tears! ” she added.

Despite the fact they both went on to wed others, they remain close.

Moss has a daughter, 19-year-old model Lila, with publisher Jefferson Hack, and she was married to The Kills musician Jamie Hince from 2011 to 2016. She’s been dating photographer Count Nikolai von Bismarck, 35, since 2015, and in January told Harper’s Bazaar magazine that being in love makes her “feel beautiful.”

After years of wild stories about her alcohol and drug use, the model told the magazine that she had given up going to clubs, adding: “I’m not a hell-raiser. But don’t burst the bubble. Behind closed doors, for sure I’m a hell-raiser. ”

This is not the first time that Heard has mentioned Moss in court. In 2020, Depp was involved in a libel case against the UK’s the Sun newspaper over an article that called him a “wife-beater.” Heard admitted in court that she struck the actor over fears that he would attack her sister, Whitney.

“I did strike Johnny that day, in defense of my sister,” she said in reference to the March 2015 fight. Heard claimed that her sister was standing at the top of a staircase.

“I had heard that he had pushed a former girlfriend, I think it was Kate Moss, down the stairs. And I thought of that at the moment and I reacted in defense of her [Whitney]. ”

Depp lost the case after Justice Andrew Nicol ruled that the Sun proved the article to be “substantially true.”

During the Sun case, Depp’s former fiancée Winona Ryder submitted a statement in his defense, saying, “I was absolutely shocked, confused and upset when I heard the accusations against him.

“I truly and honestly only know him as a really good man – an incredibly loving, extremely caring guy who was so very protective of me and the people that he loves, and I felt so very, very safe with him.”

Meanwhile, Paradis said in a statement to the court: “This is nothing like the true Johnny I have known… This is so upsetting as he has helped so many persons in his personal and professional life, with kindness and generosity.”

Depp’s long-forgotten first wife, Lori Anne Allison, also told The Post that she stood by him.
“I feel bad for Johnny having to go through this,” Allison said. “He has such an enormous heart and deserves happiness in life. He has never raised a hand to me or been violent towards me. I wish him the best and hope that he can get back to doing what he loves soon. ”

The music of Crosby, Stills and Nash is back on Spotify after the musicians initially removed all of their music earlier this year...
Read more
- Advertisement -
New york

Police in Minnesota launched a desperate search for a 6-year-old girl who has been missing since her mother was found dead in an...
Read more
Related News
ENTERTAINMENT

The music of Crosby, Stills and Nash is back on Spotify after the musicians initially removed all of their music earlier this year...
Read more
New york

Cardi B has revealed she wants to collaborate with Lil 'Kim for her upcoming album, and wants to write a mixtape with her...
Read more