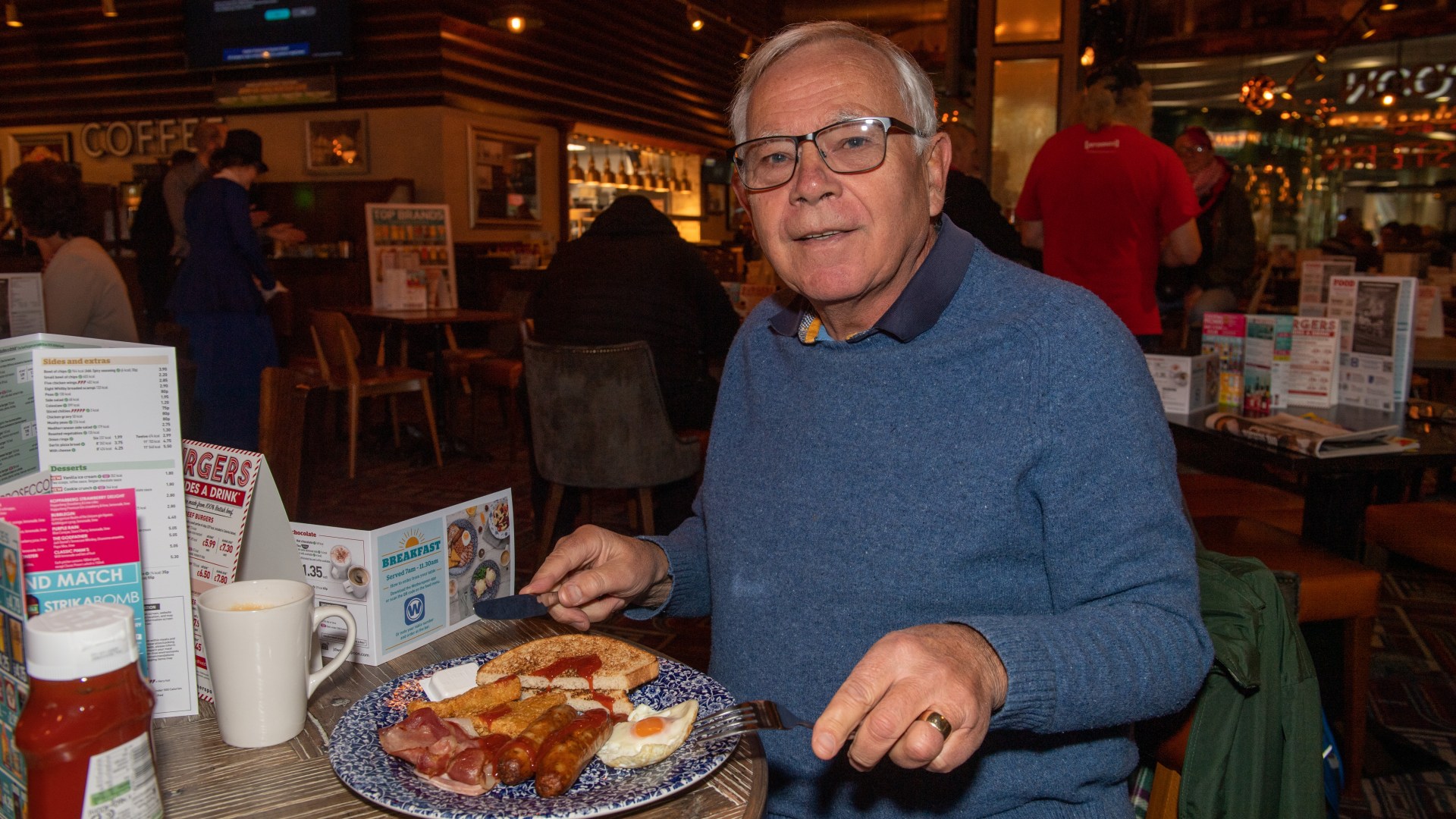 
ONE of England’s biggest Wetherspoons fans says visiting 736 pubs isn’t enough – and his obsession is about to get worse.

Neil Wesson, 73, usually makes big – and small – trips to pubs across the country by rail, but he and his wife have started taking their caravan on the road.

While the couple enjoy admiring the scenery they’ve never seen before, their destination is always the pub – they even celebrated their golden wedding anniversary over a Wetherspoon’s meal.

Now, the grandfather is on a mission – getting his total Wetherspoon count from 736 to 750 by the end of the year.

Neil, who is also a railway enthusiast, has already booked his next getaway – a train trip to visit the pubs of Scotland.

And, the last spoons he visited was a special one – it had opened its doors for the first time just an hour before he arrived.

It was the £2.4million London and North Western, which is the country’s newest spoons, and just a two-hour journey from Neil’s home in the West Midlands.

Explaining his obsession to Birmingham Live, the 73-year-old said: “I’m a railway enthusiast trying all of the different railways around the country and it seems a lot of Wetherspoon fans do both things at once.

“It’s all about building up your collection and I’ve always liked collecting things.

“We had our golden wedding anniversary dinner at the Pen Cob Wetherspoon in Pwllheli, North Wales.

“Visiting all of these Wetherspoon pubs gives you something to do and it’s good exercise because they can be a mile or more from your railway station.

“If we don’t go by rail we might be in our touring caravan. It gets you out of the house and gives you something to aim for around the country.”

Plus, Neil loves admiring the buildings too, adding: “There’s so many of them, with many in really beautiful buildings including former cinemas, theatres, churches.

“We always love reading about the history of the new places we are in, especially when that information was included on the menus.”

The retiree said it was actually a Wetherspoon’s product that inspired his mission.

He said: “People started thinking about visiting all the pubs when the company published its first directory.

“You could see where to go next. And I use that as my guide for the list I’ve got on my computer.

“The first one I went to was the Assembly Rooms in Solihull. That’s a lovely building but they moved out. My favorite is an old theater in Tunbridge Wells, the Opera House.

“You can’t just go to a pub, you have to go in and buy something, whether it’s a meal, half a pint or a coffee – lots of people do it.

“I think the most I’ve done in one day is eight. I love ham, egg and chips at lunchtime and Wetherspoon curries are excellent at night – they all include a pint, too.”

When Neil was asked why he had spent so much time visiting the pubs, rather than ‘living’, he said: “I’ve got two children, four grandchildren… and I’ve been to 75 countries.

“I retired at 52 and I’m 73 now. I was a managerial supervisor in logistics at Land Rover and, once you turned 50, they used to like making people offers to leave.

“So I talked it over with my wife, Pamela, and did – and haven’t looked back.”

Neil has even come across Wetherspoon chairman Tim Martin on his travels.

He recalled: “I was on an organized tram visit to Blackpool and went to The Thomas Drummond in Fleetwood.

“I thought I recognized the guy at the bar and said: ‘Are you Tim Martin?’ I told him I’d been to hundreds of Wetherspoon pubs and he offered to buy me a pint.

“That was nice of him, but I didn’t have it. “I said ‘Thank you, but I’ve just had one… and I need to go visit another Wetherspoon’.”

Meanwhile, one Wetherspoon superfan who has visited 900 of the pub chain’s venues recently revealed the one he thinks is the best.