Iconic ‘A Christmas Story’ leg lamp goes up in Oklahoma 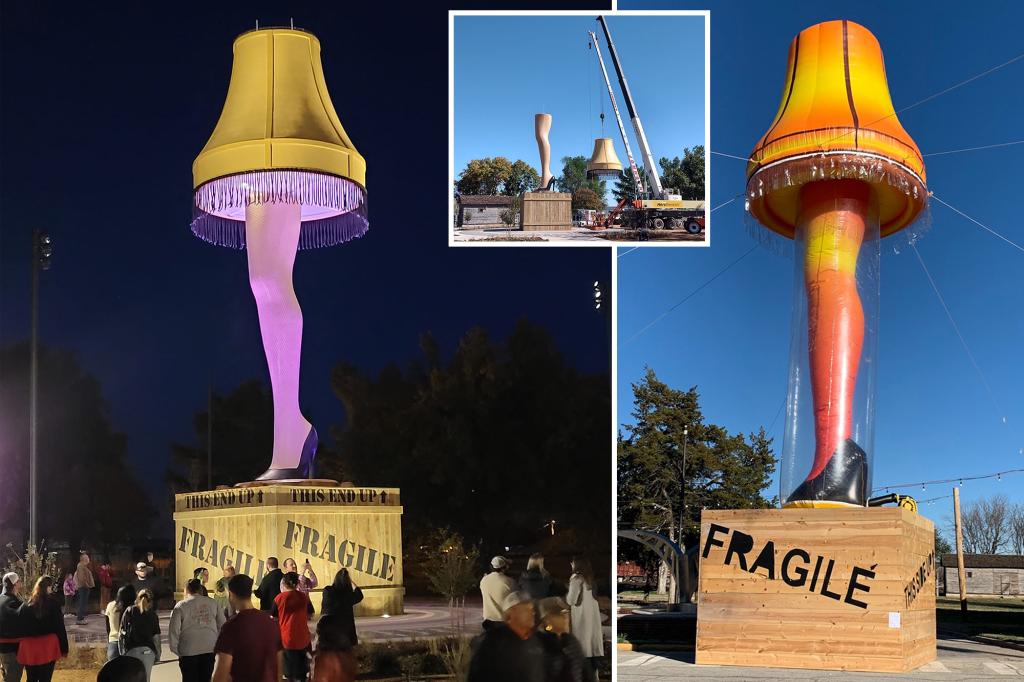 
Fragile? It must be Italian — or Oklahoman!

A 50-foot-tall version of the sexy iconic leg lamp featured in the classic film “A Christmas Story” was erected in a small Oklahoma town to honor the artist who inspired it, according to friends and city officials.

The statue boasts a black high heel and a fringed fiberglass lampshade atop a 10-foot crate marked “fragile” in Chickasha’s new downtown park, the oklahoman.com reported.

The delightfully tacky novelty lamp — which was said to have emitted the “soft glow of electric sex” in the 1983 flick — was the brainchild of the late Oklahoma University visual arts teacher Noland James, residents said.

“Noland was so gifted [and] the guy was very humble. Only to his close personal friends would he mention that he built the original leg lamp,” James’ longtime friend Joe Hutmacher told the paper.

Decades ago, James made the quirky lamp with black hose and pumps out of a lady mannequin and set it up in his office at the school. A producer of “The Christmas Story” later became enamored with it and mimicked it in the comedy, Hutmacher told the paper.

A few months after James died in 2020 at age 89, the Chickasha Economic Development Council set up a temporary 40-foot inflatable version of the lamp that became a vital hit — but it was later toppled by wind.

“For us to be connected to it in an unusual way, we’re glad that so many people love that movie — and that the leg lamp is such a big deal to people,” said the city’s Development Council Director, Jim Cowan.

Construction soon got underway on the permanent statue version of it in September.

James’ obituary credits him with creating the “prototype” of the lamp and notes that a man seeking for work at the university “became tantalized” with it and came by James’ office “many times to look at it” and ask about it.

That unnamed guy was later “on the production team that produced the leg lamp from a hosiery leg for a 1983 movie,” the obit states.

In “A Christmas Story,” the father of the main character, Ralphie, gets a lamp in the shape of a sexy leg as a prize in a contest, dazzling Ralphie and embarrassing his mom.