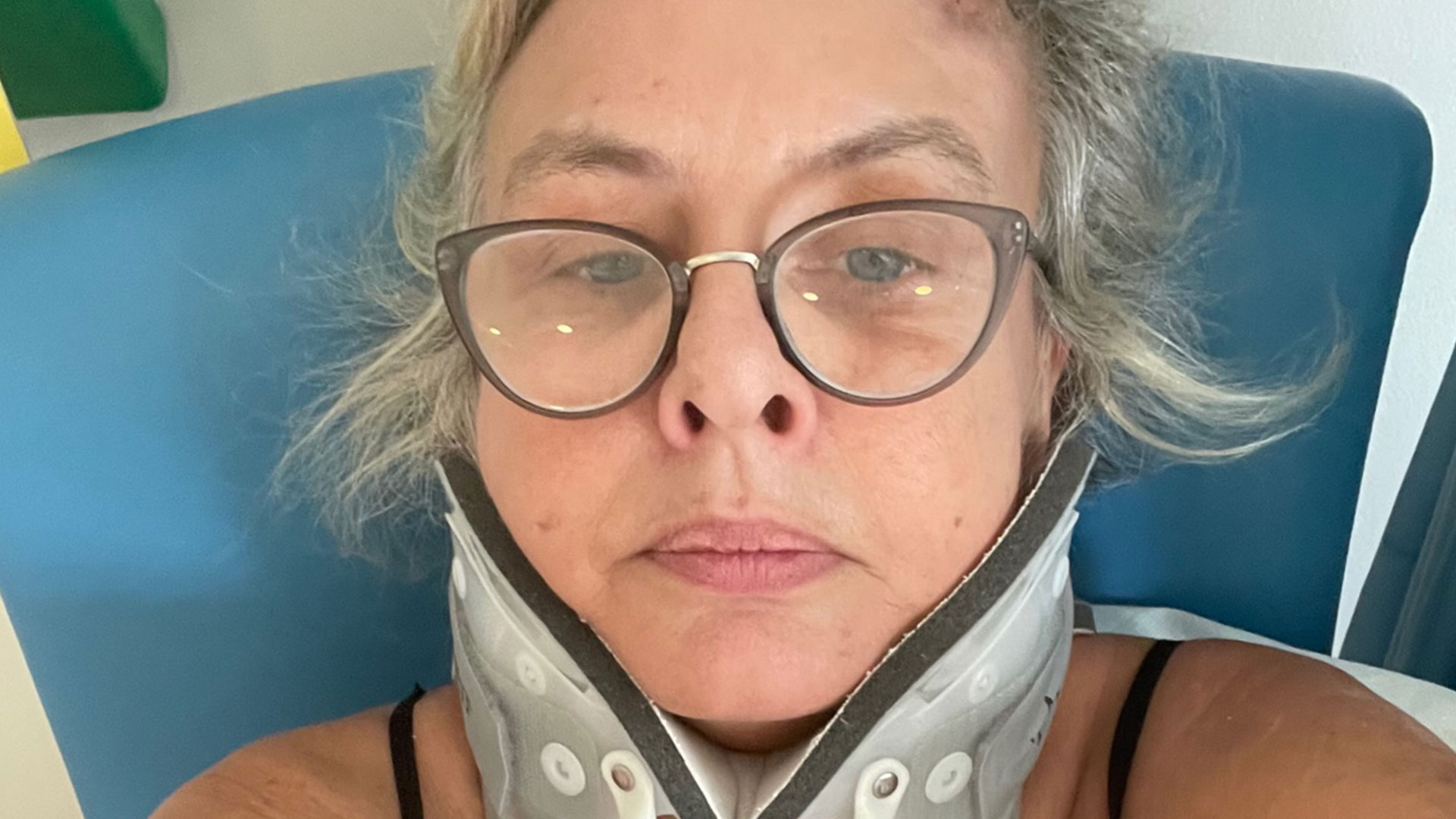 
A BRIT holidaymaker suffered horror spinal injuries after plunging 33ft while taking a selfie – only to be then left to rot in “medieval” hospital conditions by careless medics.

Jenny Birch-Morgan, 61, was taking a photo when she slipped backwards through a broken fence and fell onto the jagged rocks at the beauty spot in Budva, Montenegro.

But that was just the beginning of her horrific ordeal as what should have been a dream holiday with her daughter turned into a disaster.

Mrs Birch-Morgan, from Stratford-upon-Avon, claims she suffered neglect while in hospital – being left totally incapacitated in her own blood and faeces for more than a week.

She accused the staff of neglecting her because she was British – saying she was left feeling like “an alien”.

Nurses would leave stale food out of reach knowing she could not move and failed to carry out key scans on an injury that could have left her paralyzed.

“I could not move my body, yet they refused to treat me, to wash me, I was scared to ask for help,” Mrs Birch-Morgan told The Sun Online.

“They weren’t abusive, but they were definitely anti-British – I just felt like an alien.

“I can only describe it as medieval and grim.”

The mum had been holidaying with her daughter Omi at the popular destination when she went to take a selfie on a cliff’s edge overlooking the stunning coastline.

Mrs Birch-Morgan then slipped backwards and plunged onto the rocks – being left with severe spinal, rib and ankle fractures.

She miraculously survived – and was rescued from the ravine by a brave Belgian bystander who scaled the down cliff.

Emergency services arrived an hour-and-a-half later and took her to a hospital in the country’s capital, Podgorica.

And it was there Mrs Birch-Morgan claims she was neglected by “anti-west” hospital staff.

She was stuck in the hospital bed for a week, where she was refused water.

“I would call out for water and they just pretended not to hear me, or understand me,” she said.

I was still lumped in my own blood when I arrived, and was finally put on morphine

“I had to get someone to smuggle the water in for me.

“At one stage they decided to pull me out of bed and dumped me onto a chair in a small room and locked the door behind them.

“At that point I had to start making emergency calls to family because I thought my future might be bleak – I was basically a hostage.”

When Mrs Birch-Morgan was in the small room she said the nurses brought her one piece of stale bread every morning but put it on a table out of her reach, but she was unable to get it due to her crippled state.

Because the medical staff hAcesparks’t done scans, they failed to realize she had several fractures in her vertebrae, and when they dumped her in the room she alleges their actions worsened her condition.

Without any assistance from the hospital, her daughter contacted family back in England who went under heavy negotiation with an insurance company to get Mrs. Birch-Morgan home.

Eventually, she was transported back to England via an air ambulance and received proper medical treatment at Coventry University Hospital.

Mrs Birch-Morgan said she was so grateful for her family’s efforts.

“The doctors at Coventry can’t believe I am still here, they said if the fracture in my vertebrae was one inch higher I would be paralyzed from the head down,” she said.

“I was still lumped in my own blood when I arrived, and was finally put on morphine – in Montenegro they didn’t give me any form of painkillers, can you imagine that?

“If it wasn’t for Omi, and my brother John and his wife Lynne, I don’t know where I would be today… it gives me nightmares thinking about it.

“My family worked so hard, knocking on all sorts of doors to get me back to the UK, it was a real trial and I am forever grateful for their efforts.”

According to the Swedish health think tank, Health Consumer Powerhouse, Montenegro has “the most backward health system in Europe.”

While Mrs Birch-Morgan’s recovery will take more than six months, she is now reunited with her daughter at their home.

She still wears a full-body brace but is making a strong recovery.

Omi Birch-Morgan said it was traumatic seeing her mother fall from the cliff but is so grateful she is alive.

“She is healing amazingly well and her spirits are through the roof,” she said.

“To survive that, she is a real-life superwoman.”

The Sun Online approached the Government of Montenegro’s Ministry of Health and National Tourism Organization for comment.