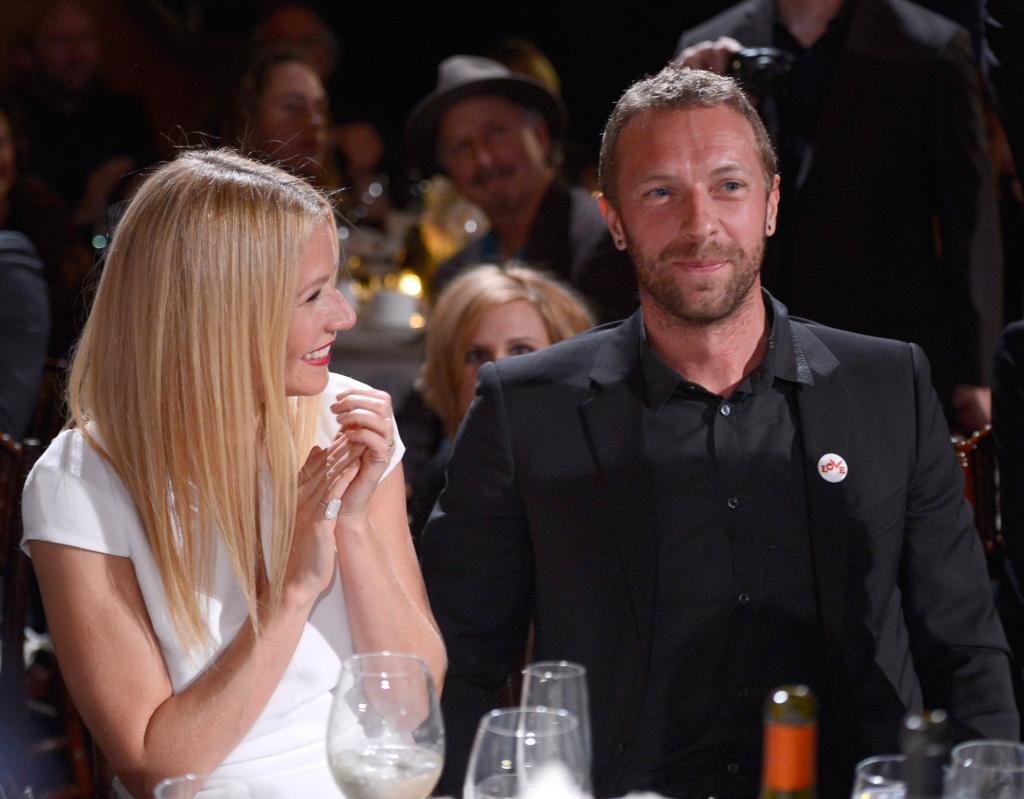 
A-list actors are known for working in front of cameras, but many celebrities, such as Gwyneth Paltrow, Katy Perry, and Demi Moore, find an added spotlight for Hollywood hookups.

Despite a few disastrous splits, some stars maintain amicable relationships with their exes as they move on to new romances.

Gwyneth Paltrow and Dakota Johnson have formed a friendship, and an even more modern family unit, since the “Fifty Shades” actress started dating “Coldplay” frontman Chris Martin in 2017.

Martin and Paltrow were married for 10 years and have two children together, Apple and Moses, but announced their separation as a “conscious uncoupling” in 2014. Their divorce was finalized in 2016, and they’ve remained an example when it comes to friendship. Exes in Tinseltown.

The Academy Award-winner proved to be cool with her ex, his girlfriend and her new husband, Brad Falchuk, when the foursome was spotted hanging out on the beach in the Hamptons in 2019.

Martin also tagged along on Paltrow’s honeymoon in the Maldives after she married Falchuk in September 2018, and Johnson was reportedly included on a family ski trip to Aspen, Colorado the same year.

The Goop lifestyle brand founder previously discussed the “love” she has for Johnson in a 2020 Harper’s Bazaar interview.

“I love her… I can see how it would seem weird because it’s sort of unconventional. But I think, in this case, just having passed through it iteratively, I just adore her,” she said.

“I always start to think of the ampersand sign — what else can you bring in, instead of being resistant to or being made insecure by? There’s so much juice in leaning into something like that.”

“Maybe I think about relationships like that differently because I grew up in my family,” Johnson told Vanity Fair in June.

Her parents, Don Johnson and Melanie Griffith, were married briefly in 1976 and once again in 1989 before divorcing in 1996. Griffith was previously married to Steven Bauer, and the former couple has one son.

Melanie went on to marry Antonio Banderas from 1996 before a divorce was finalized in 2015. They also have a daughter named Stella.

Don, 72, has been married five times to four women, two of which were annulled within days. He tied the knot with Kelley Phleger in 1999, and the couple has three children.

“We were all cool [with each other],” Dakota said of her unique childhood. “Obviously, there were times where it was not cool, but I experienced that, so I don’t want that in my life.”

Miranda Kerr and Katy Perry also share a close bond, with Kerr previously admitting she “adores” the “Firework” singer who is now engaged to her ex-husband, Orlando Bloom, 45.

Kerr, 39, began dating the “Pirates of the Caribbean” star in 2007, and the couple announced their engagement in June 2010. They married the following month.

In January 2011, the former Victoria’s Secret model gave birth to their son, Flynn. They revealed their relationship ended in 2013, with a divorce finalized by the end of the year.

The Australian supermodel married Snapchat co-founder and CEO, Evan Spiegel, in 2017, and has since given birth to two more boys, Hart and Myles.

Kerr said she was “grateful” for a happy family situation while speaking with Drew Barrymore on her eponymous talk show in November 2020.

Bloom proposed to Perry, 37, on Valentine’s Day in 2019, and the couple welcomed their first daughter, Daisy Dove, in August 2020.

“I adore Katy and I just feel so happy that Orlando has found someone that makes his heart so happy, because at the end of the day, for Flynn to have a happy father and a happy mother is just the most important thing,” Kerr said.

She added: “When it comes to special occasions when we have to be together, we work it out, so we have compromises that we work out together.”

During an Instagram Live chat between the ladies to launch a new product from Kerr’s Kora Organic’s skincare line in April 2021, Perry wore a blue floral robe she received from Miranda for Christmas.

Kerr told Perry the cover-up looked “beautiful” on her and was “so glad” she loved the gift.

“One of the great things about being close with Miranda is that I get to try out all her products, especially when her son, who’s 10 years old, comes home with them and I look through his little backpack,” the “American Idol” the judge said.

Navigating divorce from a partner was difficult for Will Smith who split from his first wife, Sheree Zampino, in 1995. The former couple have a son, Trey, and Zampino has credited Smith’s second wife, Jada Pinkett Smith, with helping keep their co- parenting relationship strong.

Zampino told Acesparks Digital that while her romantic relationship with Will didn’t work, they “made the shift beautifully” into co-parents.

“I’m not saying it was problem-free and we didn’t encounter any bumps,” the “Real Housewives of Beverly Hills” star said. “But I think that in terms of co-parenting, we’re more successful, a lot more successful actually, than in a marriage dynamic. We were put on this earth to be co-parents. That’s what we did and that’s what we’re doing. We love each other and it’s been amazing. It’s been a blessing.”

Zampino was the first guest to ever appear on Pinkett Smith’s Facebook Watch series in 2018, “Red Table Talk,” where they discussed their rough start as Jada began dating Will while he was separated, but before he was officially divorced.

“So Trey comes home and I said, ‘How did you like Miss Jada?’ He said, ‘I really liked her, Mommy,’” Zampino said, which stirred up emotions for Pinkett Smith. “Thank you for loving my baby.”

In 2021, Pinkett Smith discussed a few of the difficulties she has experienced in her motherhood journey, as she also shares son Jaden and daughter Willow with Will.

“I would say being a mother wasn’t easy, but it was worth it,” she said on her talk show. “I would say another challenge was smoothing out my thoughts around, you know, the relationship with Sheree and I. That was a real process.”

She added: “When I think about our relationship now, there’s a real sisterhood there, but it took 20 some years.

Zampino has also continued to be supportive of her ex-husband, sharing a photo of the former pair to Instagram following his best actor Oscar win. She did not comment on Will slapping Chris Rock during the award show, but instead congratulated him and noted that family comes first. “Epic Night! Congratulations again – when 1 wins we all win! #family1st,” she captioned the picture.

Demi Moore and Bruce Willis, 67, have remained close friends even after their divorce more than 20 years ago. She’s also become a devoted pal to his wife, Emma Heming Willis, 44.

The former couple was married from 1987 to 2000, and have three children together, Rumer, Scout and Tallulah.

The “Die Hard” actor married Heming in 2009 in Turks and Caicos. His daughters, Moore and her ex-husband, Ashton Kutcher, witnessed the ceremony. Willis and the British supermodel have since welcomed two daughters, Maybel and Evelyn.

Moore, 59, wrote that she was “honored” to call Heming family and a friend in a post dedicated to women who inspired her, which was shared in March 2021.

“Our children are sisters and yet there is no name for what our family connection is to one another. We are mothers united, sisters bonded on this crazy adventure of life,” she wrote.

“Emma is a beautiful mother dedicated to her family, an absolutely gorgeous woman and now she can add business entrepreneur to her resume. Her drive, determination and passion is uplifting and the woman that she is is absolutely inspiring.”

When Willis and Heming decided to renew their vows in 2019 to celebrate their 10th wedding anniversary, the couple “wouldn’t do it without” Moore.

“She welcomed me into her family like I welcomed her into ours. I have so much respect for how Bruce and Demi worked through their divorce to be able to put their children first,” Heming told Us Weekly at the time.

In March, Willis’ family shared that he was diagnosed with aphasia and was “stepping away” from acting. The statement was written on behalf of Heming, Moore, and his daughters.

“As Bruce always says, ‘Live it up’ and together we plan to do just that,” the statement read in part.