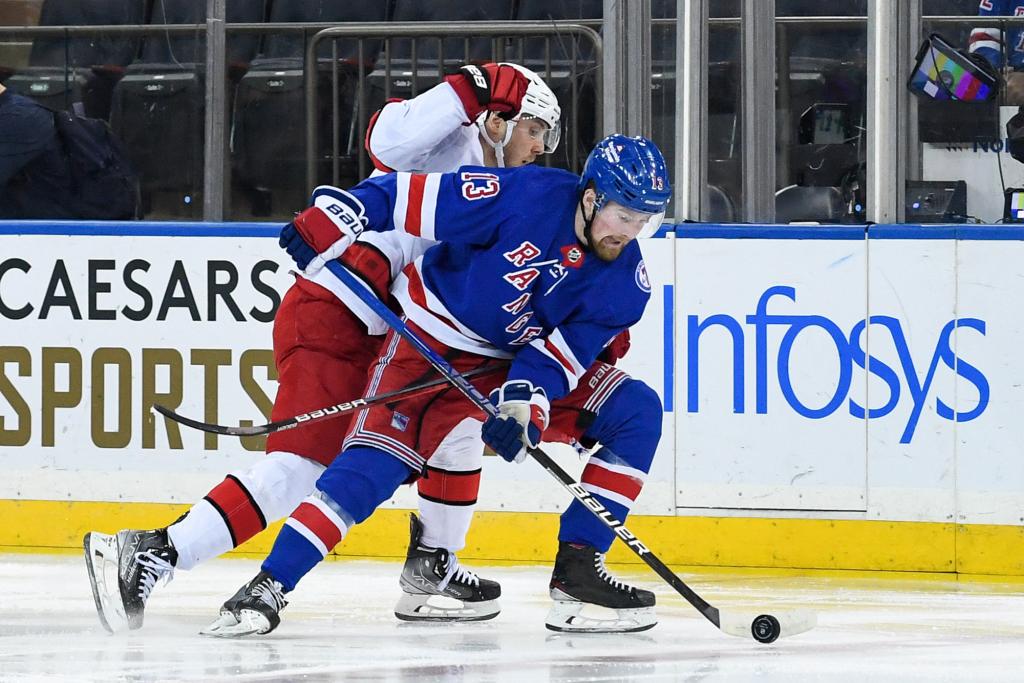 
Rangers coach Gerard Gallant insisted Alexis Lafreniere would be back in the lineup Saturday afternoon against the Red Wings, after the 20-year-old winger was made the first of what could be several load-managing scratches through the final seven regular-season games.

While Gallant confirmed Lafreniere would play, he wouldn’t reveal where the former first-overall pick would line up. Lafreniere not only rotated in on the fourth line in practice on Friday, joining Dryden Hunt, Kevin Rooney and Ryan Reaves, but also subbed in and out of the second power-play unit.

“We’ll see where he goes, but he’ll be back,” Gallant said.

Lafreniere had skated on the left wing of the third line in the previous 10 games before he was scratched for the first time in his NHL career on Wednesday. Trade-deadline additions Frank Vatrano and Andrew Copp were given the opportunity to establish themselves in the top six and they have, leaving Lafreniere on the outs of the top two lines.

Even though he had found success particularly with Mika Zibanejad and Chris Kreider on the first unit, Lafreniere was moved to accommodate the new acquisitions. Lafreniere has gone without a point in his last eight games and has recorded just two goals and one assist since the line switch.

Post Sports + members, sign up to have Mollie Walker text you the latest word on the Rangers and reply with your thoughts and questions. Not a Sports + member yet? Try it now.

“We’ve got four extra forwards and two extra [defensemen], ”Gallant said. “That’s the way it is. We talked about it early on with the players. Play well, play good and you’ll be in our lineup. The situation we talked about last week, we’re going to rest players and we’re going to rest players when the opportunity is there when they need it. If they don’t need it, they’re just going to keep playing and trying to win hockey games.

It’s likely that another marquee Ranger will get the day off Saturday, which will allow for Lafreniere to get back in.

Trade-deadline acquisition Tyler Motte, who sustained a “significant” upper-body injury on April 7 against the Penguins in his ninth game as a Ranger, will be sidelined for at least the rest of the regular season.

“He’s a ways away obviously,” Gallant said. “We’re not looking for him for the next seven games, that’s pretty for sure. We’ll take it one step at a time, but I haven’t heard anything. I just heard he’s out for quite a while. “

Defenseman Patrick Nemeth, who has been scratched the previous three games, returned to practice Friday after taking some time off due to what the team said was a personal reason.