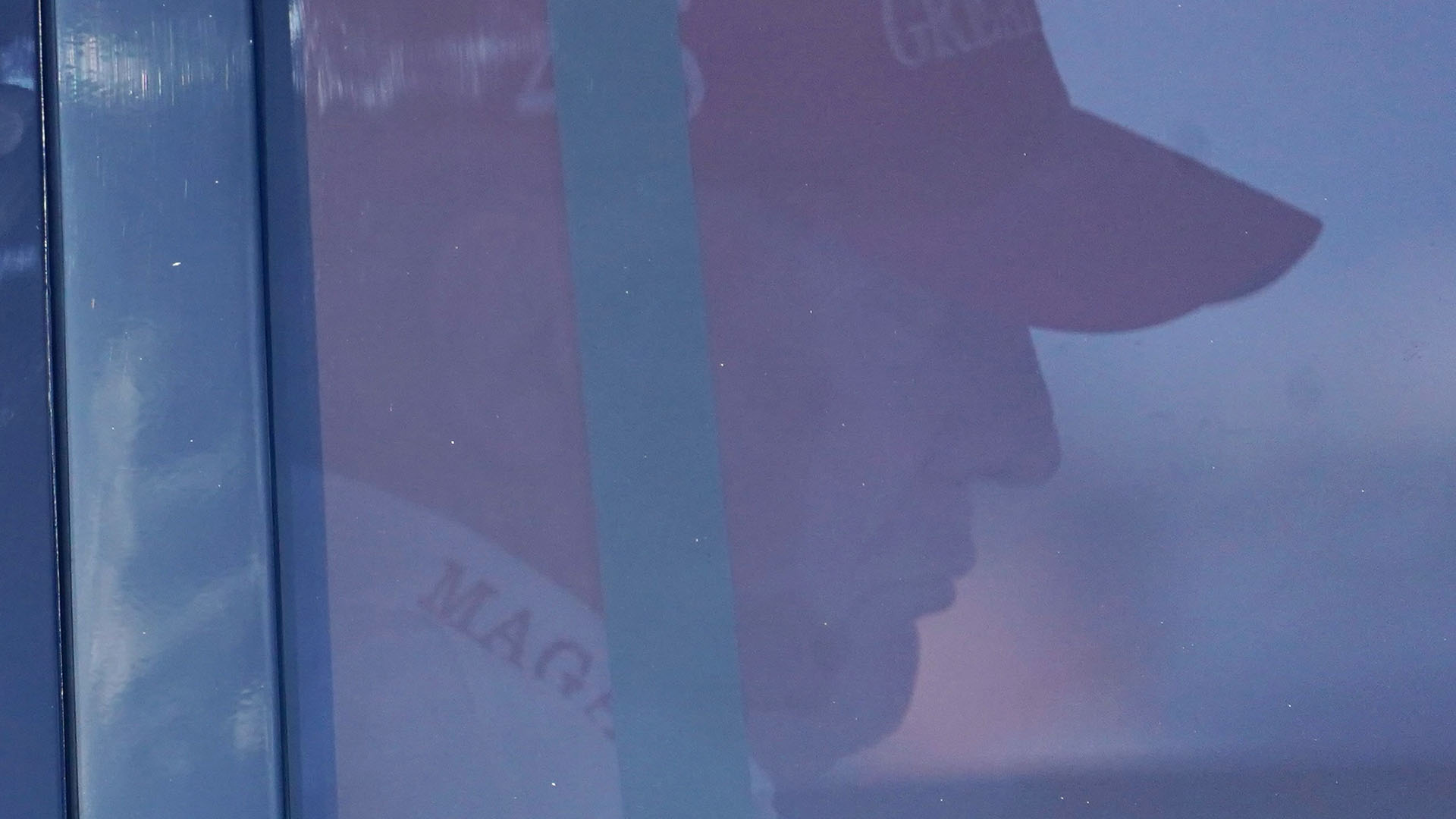 
FORMER President Donald Trump appeared to be napping in first-glimpse pictures of him hours before his daughter Tiffany’s wedding after spending some time at the golf course, The US Sun can exclusively reveal

Trump was captured wearing a MAGA hat in his motorcade en route back to his Mar-a-Lago estate in Palm Beach, Florida hours before Tiffany tied the knot there with her billionaire fiancé Michael Boulos.

In the photos of the businessman, his eyes seem to be closed like he might be getting a quick nap in before the wedding wearing his signature Make America Great Again apparel.

He donned a white shirt for his morning of golf as preparations for what is sure to be a lavish event got underway at his glamorous resort on Saturday after.

It comes after Tiffany and her fiancé Michael Boulos opted for a more intimate wedding at the gorgeous resort with fewer than 300 guests, The US Sun exclusively reported today.

A family friend even said that the couple hand-picked all the attendees themselves to ensure they’d keep the focus of their special day on them as family members flocked to Florida for the rehearsal dinner on Friday evening.

Reports in the days leading up to Tiffany’s special day have predicted that more than 500 people would be flying in from all over the world to see the second-youngest of Trump’s children exchange nuptials.

However, Elvira Grau, a longtime friend of Tiffany’s mom Marla Maples, told The US Sun the final headcount will actually be less than 300 people.

Elvira, who is among those invited to attend the sure-to-be glamorous event, said: “It’s not going to be a big, big wedding – not like 500 people as some have suggested.

“It will actually be less than 300 people. So it’s a smaller, handpicked crowd of just the closest family and friends.”

The Trump-Boulos wedding is due to begin at 4.30pm on Saturday with a reception on the lawn of Mar-a-Lago.

The build-up to Tiffany’s wedding has been anything but smooth sailing.

A Category 1 storm, dubbed Hurricane Nicole, made landfall in the Sunshine State earlier this week, shuttering Palm Beach International Airport on Wednesday and grounding all flights as guests were due to arrive.

Mar-a-Lago was also closed and all staff were instructed to evacuate. They were told not to return until Friday for a scheduled rehearsal dinner.

The storm, which had since weakened in severity, canceled a number of pre-wedding celebrations and events, including a golf tournament that was due to take place at Trump’s golf club.

However, the worst of the storm appears to have passed and bright, clear skies are forecast in the Palm Beach area on Saturday.

The father-of-the-bride has also been weathering some tumult of his own in recent days.

The ex-president, who is expected to announce a third run for the White House next week, has been facing criticism from Republican leaders after a number of candidates he backed during Tuesday’s midterm elections failed to win, stifling the GOP’s hopes of a “red wave”.

Some Republican leaders blamed Trump for his “toxic” influence and branded him a “disaster” in the days leading up to the vote. He was accused of “sabotaging” the party’s ambitions by touting his potential 2024 run – instead of focusing on the race at hand.

Trump hit back at critics in a scathing statement published through his Save America PAC on Thursday, writing: “They will keep coming after us, MAGA, but ultimately, we will win. Put America First and, MAKE AMERICA GREAT AGAIN!”

Elvira said she doesn’t yet know whether Trump plans to speak at his daughter’s wedding, although father-of-the-bride speeches are an age-old tradition.

Despite the storm scare and her father’s political frustrations, Tiffany is said to have been “beaming” in recent days, voicing her excitement at finally tying the knot with Boulos, whom she met during a trip to Greece four years ago.

“I’m ecstatic for them. They’re happy, they’re a beautiful couple and they’re so in love,” gushed Elvira.

“And the family is just wonderful. Michael’s family is wonderful. As I said Michael’s mom is a delight. I spend a lot of time with her at the bridal shower. She’s so beautiful and spiritual and I could see how she and Marla get along because they’re both really beautiful souls.

“Tiffany and Michael are soulmates for sure… they’re just on the same page.

“They’re going to be a beautiful family.”

Ahead of her special day, Tiffany was celebrated last weekend with an extravagant bridal shower thrown by her older half-sister, Ivanka Trump.

The exclusive bash was held at family friend Susan Malzoni’s sprawling 40-acre estate in Jupiter and was attended by a handful of family and close friends, including Tiffany’s mom Marla Maples, her sister-in-law Lara Trump, and her stepmother, former first Lady Melania.