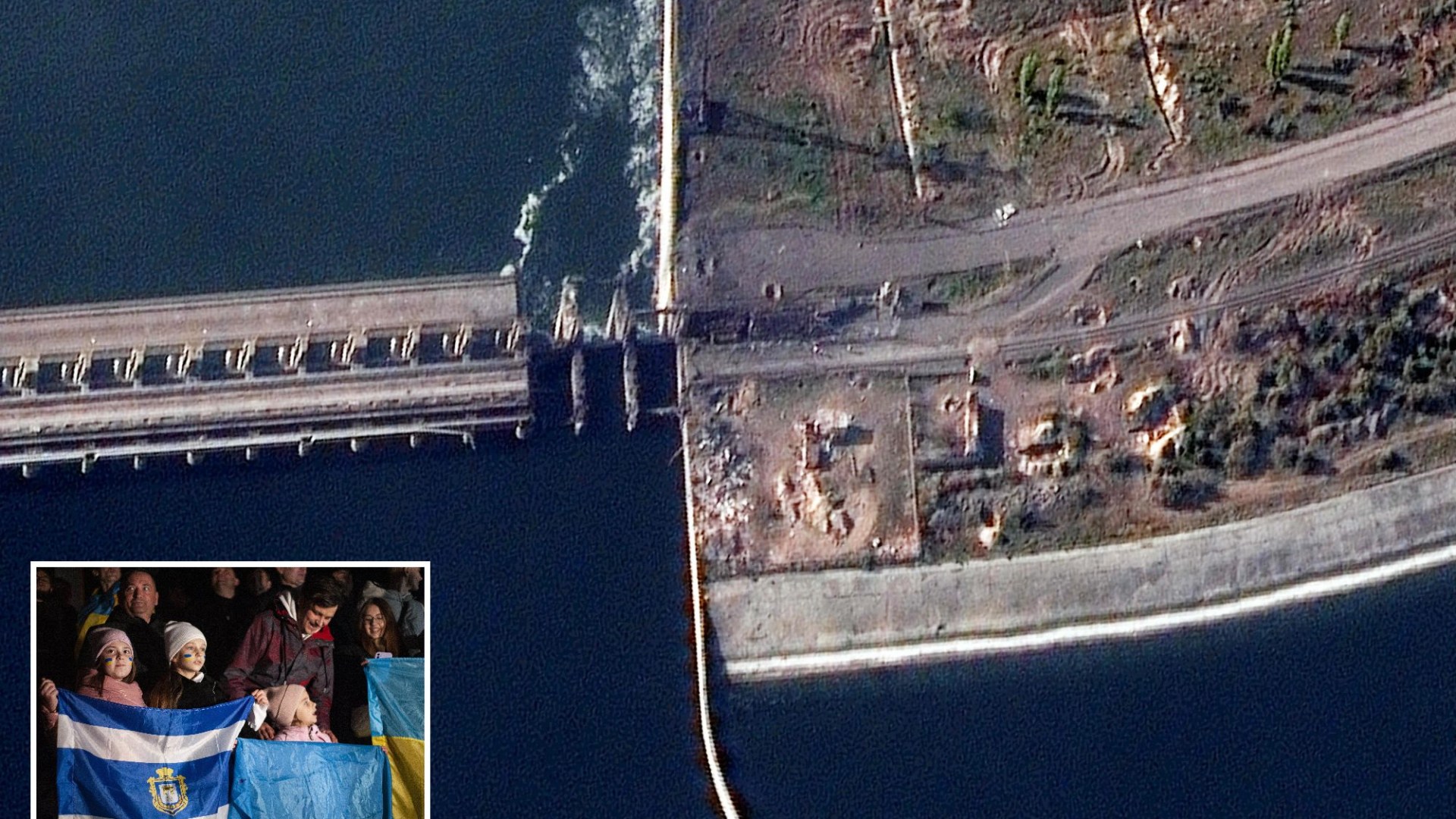 
FEARS are growing that fleeing Russian troops “deliberately destroyed” the Kherson dam in order to release an “apocalyptic” wall of water over the city.

Satellite images appear to show sections of the Nova Kakhovka dam on the Dnipro River have been “deliberately destroyed” by retreating forces still loyal to Russian President Valdimir Putin.

Images from Maxar Technologies seem to reveal damage to parts of the northern section of the dam as well as the sluice gates at the hydroelectric power plant.

It is not clear though how the damage was caused or by whom.

Ukraine and Russia have repeatedly blamed each other of plotting to breach the dam, with Moscow claiming it was caused by shelling by the Ukrainians earlier this month.

No evidence was provided though to back those claims up.

The Kremlin issued threats two weeks ago that it would mine the area and unleash a “grandiose water apocalypse” to prevent a counter-offensive by Ukrainian troops.

Footage has also emerged supposedly showing an explosion on a bridge near the Kakhovka hydroelectric power station, rather than the dam itself.

It is not clear what caused the explosion or who is responsible.

Andriy Yermak, the head of the Ukrainian presidential office, accused Moscow of using scare tactics after failing with its “nuclear blackmail”.

The bursting of the dam, built during the Soviet era, would inflict catastrophic destruction to Kherson and put hundreds of thousands of lives in danger to the people living downstream due to extensive flooding.

Other images have emerged showing significant damage to several bridges as Putin’s troops withdrew from Kherson to the East bank of the Dnipro river.

“Satellite images this morning… reveal significant new damage to several bridges and the Nova Kakhovka dam in the aftermath of the Russian retreat from Kherson across the Dnipro river,” Maxar said in a statement.

The Ukrainian flag was raised in the retaken city of Kherson as the Russian tyrant’s forces fled, with many drowning as they tried to cross a river on foot.

Kyiv’s forces triumphantly swept into Kherson, a strategically important city seized by Putin’s forces after they invaded Ukraine at the beginning of the war.

President Volodymyr Zelensky said Kherson was “ours” as footage showed troops being greeted by jubilant civilians in a highly symbolic moment.

As Russian forces fled, it was claimed Putin has now been offered “surrender terms” by the West that would see him give up all his territory except Crimea.

According to Putin expert Professor Valery Solovey, former academic at Moscow’s prestigious Institute of International Relations, the deal “has been negotiated with Ukrainian leadership”.

Russia would leave the Luhansk and Donetsk regions of Ukraine, which were annexed by Russia after sham referendums earlier this year.

Crimea, which was seized in 2014 at the beginning of Putin’s land grab, would remain in Russian hands until 2029 but become a demilitarized zone.

“It is nothing but an offer of surrender of the Russian Federation,” he said.

It comes amid reports that Russian soldiers were ordered to dress in civilian clothes and escape from the southern city on their own.

“It is safe to surrender to captivity after prior discussing the conditions of surrender with authorized representatives of the Ukrainian command by calling the hotline of the state project of Ukraine ‘I want to live'”.

It comes as Moscow blew up Antonivskiy Bridge – a major thoroughfare connecting both banks of the Dnipro river.

A large chunk of the bridge linking to the Russian-controlled east bank is now submerged under the Dnipro after it was destroyed in a missile attack early Friday morning.

A member of Kherson’s regional council said many Russian troops drowned trying to leave the city.