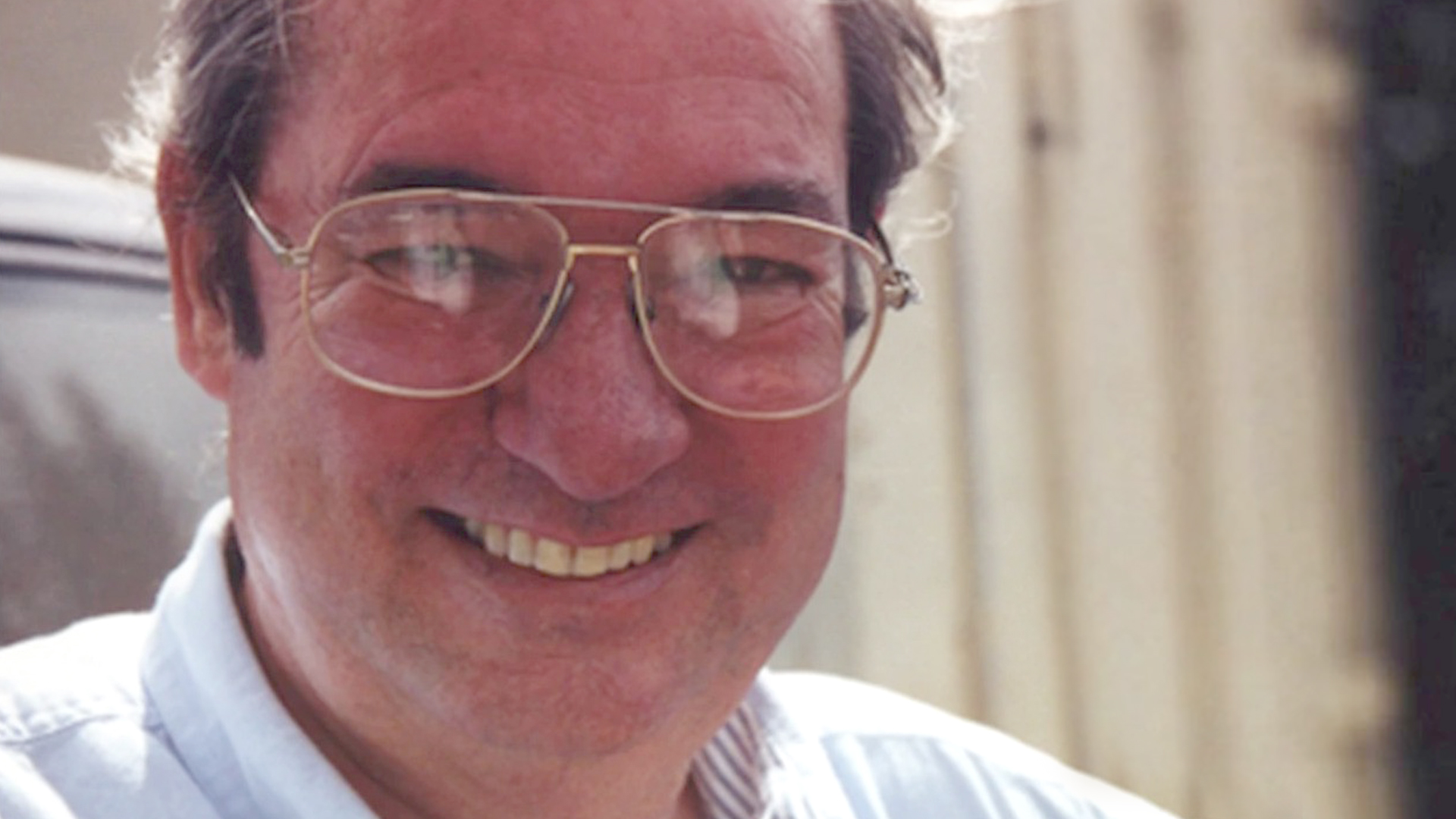 
DISTURBING secrets about the “grandad of conspiracy theorists” who predicted 9/11 before being shot dead by cops have been revealed by experts.

Milton William “Bill” Cooper remains a polarizing figure for his accurate and dark predictions that include 9/11 and the steady rise of school shootings in the United States.

Dubbed “the grandaddy of conspiracy theories,” Cooper correctly anticipated that the government would acknowledge the existence of UFOs among other chilling predictions.

Eight years before the Columbine Massacre, Cooper wrote extensively about the danger of school shootings and claimed the number of prescription medications given to children would elevate the risk.

And during a live broadcast of his radio show, The Hour of the Time in 2001, Cooper warned listeners that a catastrophe would befall the US that would spark war in multiple countries.

Mark Jacobson, who wrote the book Pale Horse Rider: William Cooper, the Rise of Conspiracy, and the Fall of Trust in America, spoke exclusively to The US about Cooper’s colorful life and beliefs.

“In the best sense, I like to call alternative history ‘para-politics’ because when you get down to it, most history is written, the winners or losers. [rely] on conjecture.

“I say this with a caveat because once these theories become institutionalized, like say: ‘the election was stolen.’

“People keep believing them against all available evidence, that turns into sheer mendacity and plain stupidity.”

Cooper made his shocking 9/11 prediction during a live broadcast of The Hour of the Time from his Arizona home on June 2, 2001.

“I’m telling you, be ready for a major attack,” he told listeners. “Something terrible is going to happen in this country.”

“And whatever is going to happen they’re going to blame it on Osama Bin Laden. Don’t you even believe it,” Cooper said during the summer broadcast.

He also stated, on air, that America would then go to war in up to three different countries after the twin towers would be demolished and claimed that Bin Laden would be a scapegoat.

“What William Cooper was brilliant at was figuring out who was going to get the blame. Osama Bin Laden was the perfect case,” Jacobson said on the podcast, Crackpot.

He told The US Sun: “As a reporter, I was on the scene only a few minutes after the buildings fell, so Cooper’s theories and subsequent 9/11 Truth stuff is interesting to me.

“But, the sheer degree of suffering just makes a lot of those ideas seem a little abstract and disrespectful to me…”

“[Cooper] deserves credit for predicting the event to some degree.

“His stuff about the controlled [demolition] is fascinating because what he did was predict how people would come to think about the cause, not necessarily what really happened.”

During his naval service aboard the USS Tiru in 1966, Cooper stated that he and other crew members saw an unidentified aerial object comparable in size to a “football field” repeatedly entering and exiting the water, according to Pale Horse Rider.

But witnesses were told by authorities that they had not seen anything – and warned not to speak about it.

In 1988, 22 years later, Cooper began spilling his UFO experiences to the public for the very first time since the sighting via the paranormal bulletin board system Paranet.

He would later team up with John Olsen Lear, the author of “The UFO Coverup,” whose father was the pilot Bill Lear, the founder of the Learjet who had flown on assignment for the CIA.

Olson and Cooper would later write an entire indictment together against the US government for its alleged secret negotiations with aliens.

Cooper was a huge part of making documented extraterrestrial sightings less of a campfire tale, and more of direct political action.

Jacobson, also an avid UFOlogist told The US Sun: “I am a UFO guy. I keep up with the literature. I also believe humans landed on the moon in 1969.

“As for UFOs or whatever they call them now, I assume there is life on other planets. But who knows? I just keep watching the skies.”

Cooper wrote in 1991’s Behold a Pale Horse: “The sharp increase in prescriptions of psychoactive drugs like Prozac and Ritalin to younger and younger children will inevitably lead to a rash of horrific school shootings.”

He continued: “Using drugs and hypnosis on mental patients in a process called Orion, the CIA inculcated the desire in these people to open fire on schoolyards, and thus inflame the antigun lobby.

“In every instance, I have investigated…the shooters were all ex-mental patients who were all on the drug Prozac! This drug, when taken in certain doses, increases the serotonin level in the patient, causing extreme violence.”

Strongly opposed to the practice of prescribing amphetamines to kids, it was nearly a decade before the Columbine Massacre of 1999 that Cooper stated in his book such meds were going to have murderous effects on youth.

A journalist who is not an endorser or opponent of Cooper, Jacobson argued for the big picture painted by the conspiracist himself, who said a prediction like this is a matter of admonition, not premonition.

“For many, including those who would later claim that the seemingly endless series of school shootings were a plot by gun-control advocates to take away America’s weapons, Cooper’s words took on an air of prophecy,” Jacobson wrote in Pale Horse Rider.

“But, Bill Cooper never claimed to be a prophet… there was nothing supernatural about his predictions. Anyone could do it. It was all in the methodology, summed up in what he called his ‘standard admonition.'”

Cooper required his listeners to “listen to everyone, read everything, believe nothing until you, yourself, can prove it with your own research.”

Jacobson told a bit of the magic behind the accurate predictions in his book.

He said: “Truth be told, it is no great trick for a conspiracist like Bill Cooper to hit on a high number of predictions. Unlike the detective on the beat, tasked with finding the culprit, the conspiracist always knows who did it from the start.”

On The Hour of the Time, Cooper’s radio broadcast that aired live at his Arizona home from 1992 to 2001, he warned listeners of his coming demise towards the end of his show and life.

His paranoia grew in the time leading up to his violent death.

In 2001, during a long stint of eluding authorities, he posted daily updates on the well-being of himself and his family.

“Well, it’s official ladies and gentlemen. We just got a call from a reporter on Channel 5 news. The court has issued a bench warrant for the arrest of myself and my wife Annie,” Cooper said, foretelling the possible end of the broadcast. .

Authorities approached his property and reportedly tried to arrest him on assault with a deadly weapon and endangerment charges because of conflicts with neighboring residents, Pale Horse Rider said.

He told the officers sent to the scene that they would never take him alive, and they never did.

Cooper shot back at the encroaching police officers in one final evasion attempt, and, not even two months after the 9/11 attack, was killed at his desert home on November 5, 2001, by Apache County Sheriffs.

By this point, he had been named a “major fugitive” by the US Marshals Service.

Even Cooper’s death has developed a kind of lore around it, but Jacobson said the simple answer in this instance is the correct one.

“The on-paper reason (that he was shot by the Apache County Sheriffs) is the real reason. People love to bring in the feds, the Illuminati, aliens from space but the version in my book is the correct one,” Jacobson said. to The US Sun.

A 2nd Amendment American from birth until death, Cooper lived by the gun and died by the bullet.

A Pale Horse is Born

Taking Cooper’s life story into account, it isn’t hard to see how he became so rebellious.

He was born May 6, 1943, in Long Beach, California, to an Air Force lieutenant father and a mother whom he described as one of the sweetest people anyone could ever meet, according to Jacobson.

Early exposure to the American military lifestyle would shape much of his life and world views.

While his family moved around for his father’s service, young Cooper spent a substantial amount of his time in California, particularly Long Beach.

He claimed that he served in the US Navy, the Air Force, and Naval intelligence until his 1975 discharge.

However, the only confirmed records of his service show that he was an E-5 Sergeant in the Navy and that he served in the Vietnam war.

Post-traumatic stress disorder (initially referred to as post-traumatic delayed stress syndrome) cast a shadow over Cooper for much of his life following his time in Vietnam.

In an essay he wrote during his time as a photo student at Long Beach City College, he described “reliving the terror and death” of Vietnam over and over again, in part due to his PTSD being triggered by fireworks and the 4th of July celebration. chaos.

He considered killing himself during the shellshock, until a fellow Vietnam vet neighbor who recognized PTSD symptoms took him in to recover.

After the treatment, he believed himself to be a “new man altogether.”

More than one wife fled from his abuse, child-in-tow, and Cooper had a habit of never seeking the women and children out to reconcile, Jacobson’s book found.

Former spouses of Cooper described him to the author of Pale Horse Rider to be everything from masculine to a great dancer who was “light on his feet.”

These were sweet qualities that supposedly masked a Dr. Jekyll and Mr. Hyde-like temper.

One of Cooper’s ex-wives told Jacobson that he physically kicked her and her daughter out of a vehicle with his prosthetic leg on their way home from visiting a Chuck E. Cheese.

While Cooper loved to allege that a scuffle with government officials initially cost him his leg, he once told kids a tall tale about losing it to a shark.

It was his wife Annie and his daughter, nicknamed “Pooh,” with whom Cooper had the most stable and long family standing.

Pooh was even on The Hour of the Time with Cooper.

She sang the national anthem for the audience, and Cooper bragged about how she only goes to home school.

Jacobson said on the podcast Crackpot that Cooper “wasn’t that stable of a human being, I don’t think.”

Still, the writer and researcher told The Sun that “Cooper’s drinking and bad behavior doesn’t destroy his cred. A lot of people have messy lives, [but] that doesn’t mean they shouldn’t be listened to.”