Elvis Presley manager had shady past, link to murder 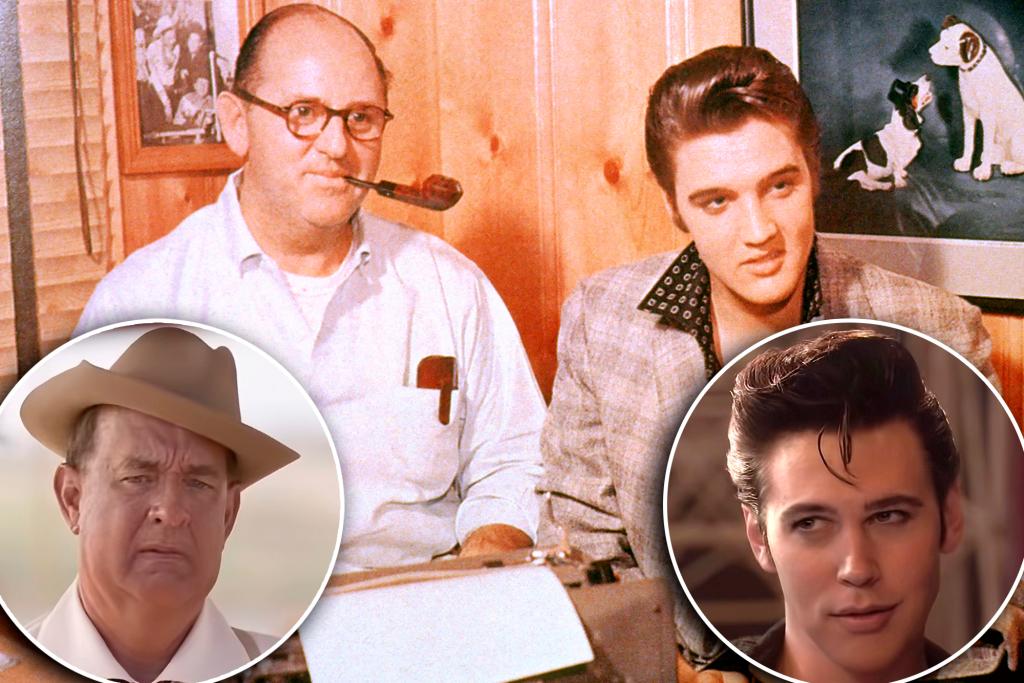 
The man behind Elvis Presley also locked down the woman beside him.

Presley’s manager Colonel Tom Parker was so controlling, he pressured the rock star into marrying Priscilla Beaulieu on May 1, 1967. Determined to get those “I do’s” done, Parker even arranged the whole wedding at the Aladdin hotel in Las Vegas, where the Inveterate gambler had a history of dangerous debts.

“He wanted him tied down to a woman so there wouldn’t be any scandals about women,” said James L. Dickerson, whose 2001 book “Colonel Tom Parker: The Curious Life of Elvis Presley’s Eccentric Manager” was purchased by Warner Bros. for the new “Elvis” movie – starring Tom Hanks as Parker – opening on Friday.

“He considered women a bad influence on Elvis.”

Priscilla was only 14 when she met Elvis – 10 years her senior – while he was stationed in Germany with the US Army; three years later, she would move into Graceland before tying the knot with him at age 21. Presley – who had dated the likes of Ann-Margret, Natalie Wood and Rita Moreno – was reluctant to wed the ingenue and settle down.

But the colorful, controversial Parker prevailed. He had an intense influence on the man who would be the King ever since discovering him and becoming his manager in 1955.

“I think Elvis was just afraid that if he stood up to Parker, he would mess everything up,” Dickerson said. “I think he was just fearful of that.”

Born Andreas Cornelis van Kuijk in the Netherlands in 1909, Parker had such a shady past that there were rumors that he was involved in the murder of Anna van der Enden in his hometown of Breda. The 23-year-old grocer’s wife had been viciously bludgeoned in May 1929 near Parker’s family home, shortly before he left the country.

To this day, though, the case remains unsolved.

“There’s really no evidence,” Dickerson said. “But we know that Colonel Parker was not really a good man.”

Illegally immigrating to the US as a stowaway in 1929, he adopted the name Tom Parker. “He thought it sounded very American,” said Dickerson. And using his birth name, he added, “would identify him as an immigrant.”

Early on, he traveled the States as a carny: “People would buy tickets to see the Dancing Chickens, and he had a hot plate they were standing on to make them dance,” said Dickerson.

He also briefly served as a private in the army, but after he deserted he went to military prison until he was released, reportedly due to a psychotic breakdown. (Parker would get the honorary “Colonel” title in the Louisiana State Militia for work that he did on the election campaign of Governor Jimmie Davis, who was a former country singer.)

Eventually, he moved to Nashville, where he began working with country singers such as Eddy Arnold and Hank Snow. And when Parker set out to manage Presley, he used Snow to help convince the young singer’s parents.

“He plotted and formed an association with Hank Snow,” said Dickerson. “He knew Elvis’ mother loved Hank Snow. So he took Hank Snow with him to talk to the mother and father. ”

But then Parker promptly cut Snow out of the deal to manage Presley. “They had a business arrangement that fell apart,” said Dickerson. “And Hank Snow said that Parker was the lowest human being that had ever walked the earth.”

Although Parker would go on to help Presley become rock’s first superstar with hits such as “Heartbreak Hotel,” “Hound Dog” and “Don’t Be Cruel,” the two didn’t exactly love each other’s tender.

“Parker was old enough to be Elvis’ father, but they didn’t have that kind of relationship at all,” Dickerson said. “I don’t know if they ever hit it off.”

In fact, Parker didn’t even have the most basic thing in common with Presley: “He didn’t particularly like music,” said Dickerson. “He never liked music. He didn’t listen to music. “

Still, Parker certainly profited disproportionately from Presley’s record sales and concerts, taking a bigger cut than the norm. “He started out at 25 percent, which was high,” said Dickerson. “Fifteen percent was normal.”

But after Parker’s massive gambling debts had gotten him into big trouble in Las Vegas, he hiked his percentage up to 50 percent. “His vice was gambling,” said Dickerson. “He could lose a million dollars in one night in Vegas.”

Parker also pushed Presley to shift his focus from music to movies. And although Elvis had success with films such as 1957’s “Jailhouse Rock,” Dickerson believes that movies ultimately hurt Presley’s career – especially after he returned from a two-year stint in the Army in 1960.

“It killed his music,” he said. “Parker branded him as a movie star, but he got terrible roles.”

Elvis also missed out on potentially lucrative global tours, presumably because Parker didn’t have a US passport.

And after Elvis’s big comeback TV special in 1968, the following year Parker signed Presley to perform a long-term deal in Las Vegas that snuffed out his momentum – and his mojo. “It just broke his spirit,” said Dickerson. “He was a profoundly unhappy man.”

Indeed, it was during those Vegas years that Presley got deep into abusing prescription drugs. He died on Aug. 16, 1977, of a heart attack.

Parker was still wheeling and dealing when he came to the funeral wearing a baseball cap and a Hawaiian shirt. “He tried to make deals with the people there,” said Dickerson.

And he continued to profit off Elvis after his death, receiving 50 percent of his royalties until settling out of court with the Presley estate in 1983. It’s been estimated that the deal earned Parker 100 million.

Although Parker himself would live for another 20 years after Presley, until 1997, a big part of him died with Elvis. “He was mainly living in the past,” said Dickerson.