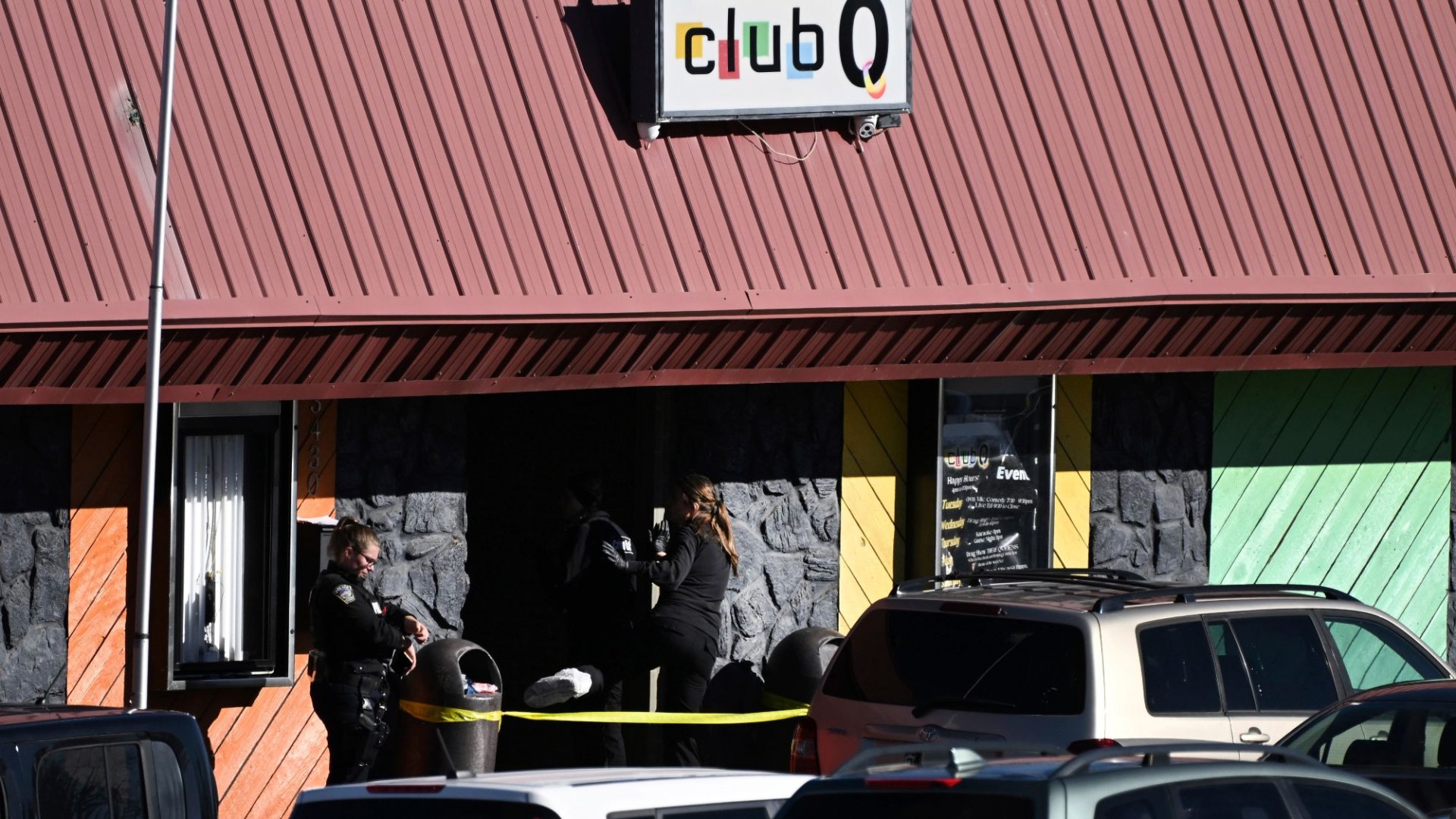 It emerged as police were accused of missing the chance to seize guns from Anderson Lee Aldrich, 22, after he was arrested for threatening his mother with a homemade bomb.

Aldrich was in custody today after being overpowered and pinned to the ground by “hero” club-goers on Saturday night.

He allegedly killed five people and wounded 25 in a hail of bullets from an AR15-style rifle inside LGBT+ venue Club Q.

Police said they were investigating the suspect’s previous “interactions with law enforcement” as questions were raised last night over whether the Colorado’s “red flag” law was ignored.

It emerged Aldrich’s was arrested over a bomb scare that saw ten homes evacuated in the Lorson Ranch area of ​​the city in June 2021.

His mother called cops saying he threatened to hurt her with “a homemade bomb, multiple weapons and ammunition”, reported KOAA at the time.

He eventually gave himself up after a three-hour standoff with the bomb squad and crisis negotiators.

Although no explosives were found, his mother said he had firearms.

Later, prosecutors dropped charges of menacing and kidnapping and the file was sealed, reported The Gazette newspaper of Colorado Springs.

Yesterday the paper said it had received a chilling call from Aldrich in August.

He said in a voice message to an editor: “There is absolutely nothing there, the case was dropped, and I’m asking you to either remove or update the story.

“The entire case was dismissed.”

District attorney’s office spokesperson Howard Black said the shooting investigation will also include a study of the bomb threat.

“There will be no additional information released at this time,” Black said. “These are still investigative questions.”

There are no records indicating police or Aldrich’s relatives tried to trigger the “red flag” law that would have allowed authorities to seize his weapons and ammo, reports the Associated Press.

Gun control advocates say such a seizure would have at least raised Aldrich’s profile with law enforcement.

“This should have alerted them, put him on their radar.”

Sullivan sponsored the state’s red flag law — which was passed in 2019 — after his son was killed in the Aurora cinema shooting.

Duke University sociologist Jeffrey Swanson, an expert in red flag laws, said the Colorado Springs case could be yet another missed warning sign.

He said: “This seems like a no brainer, if the mom knew he had guns.

“If you removed firearms from the situation, you could have had a different ending to the story.”

However, Colorado has a far lower rate of enforcement than other states with similar red flag laws, according to AP.

And El Paso county where Aldrich lives appears openly hostile to the law, claiming it “infringes upon the inalienable rights of law-abiding citizens”.

County Sheriff Bill Elder has said his office would wait for family members to ask a court for surrender orders and not petition for them on its own accord, unless there were “exigent circumstances” and “probable cause” of a crime.

Two of the five victims have been identified following Saturday night’s massacre.

It said: “My boys are gone. Plz take care of each other. I love you both so much.”

Another victim, Charlene Slaugh, was in intensive care last night after reportedly suffering 13 gunshot wounds and a collapsed lung.

Witnesses told of the panic inside the LGBT+ venue after the gunman stormed in with two weapons and started shooting.

The New York Times reported he wore body armor and was firing a long gun in the style of an AR-15 rifle.

Bartender Michael Anderson said he heard three bangs and saw the “outline of a gun” in the suspect’s hands.

He said: “I was preparing to get shot, when the shots stopped.

“After a minute or two I wasn’t sure if it was over or not, so I got up and decided to make a run for it.

“I found a man lying on the floor being shot in the neck.

“What I can’t stop thinking about is the visuals of the evening. Of the bodies, of the blood, of the broken glass, of the carnage in the wreckage and seeing a safe place turned into a war zone.”

He said: “When I came out there were bodies on the floor, shattered glass, broken cups, people crying.

“There was nothing keeping that man from coming in to kill us. Why did this have to happen? Why did people have to lose their lives?”

He said one person grabbed the gunman’s weapon and beat him with it, and another pinned him to the floor until the cops arrived.

“This incident was over by 12.02am and that’s largely because of the intervention of at least one, possibly two, very heroic individuals who subdued this guy.

“But for that, as tragic as this incident is… it could have been much, much worse but for these heroic actors.”

The nightclub’s owners also said “dozens and dozens of lives” had been saved by their actions.

“We owe them a great debt of thanks,” added Colorado Springs Police Chief Adrian Vasquez.

Aldrich was injured in the struggle and was arrested in hospital.

The shooting is being investigated as a hate crime, assisted by the FBI.

Vasquez described the nightclub as a “safe haven” for the Colorado Springs LGBTQ+ community.

“Every citizen has the right to feel safe and secure in our city,” he said.

“To go about our beautiful city without fear of being harmed or treated poorly.”

The nightclub said on Facebook: “Club Q is devastated by the senseless attack on our community.

“Our prayers and thoughts are with all the victims and their families and friends.

“We thank the quick reactions of heroic customers that subdued the gunman and ended this hate attack.”

Sunday was Transgender Day of Remembrance in which Americans remember those who have been killed as a result of transphobia.

It was first observed in 1999 and is held annually on November 20 to draw attention to the continued violence endured by transgender people.

President Joe Biden said the gay and trans community “has been subjected to horrific hate violence in recent years.

He said: “Gun violence continues to have a devastating and particular impact on LGBTQI+ communities across our nation and threats of violence are increasing.

“And tragically, we saw it last night in this devastating attack by a gunman wielding a long rifle at an LGBTQI+ nightclub in Colorado Springs.”