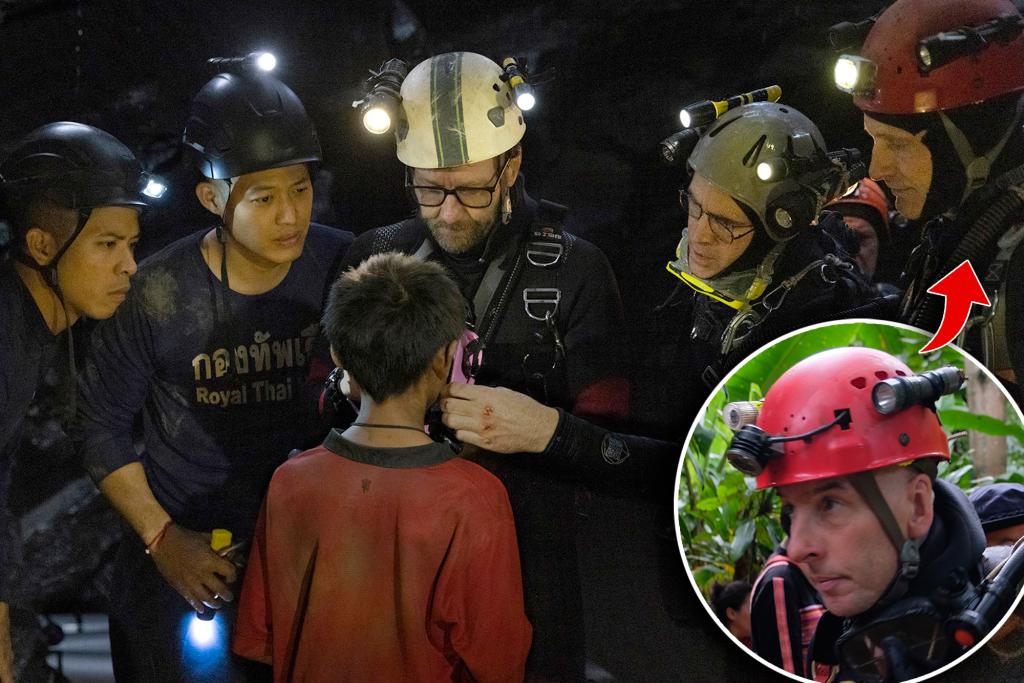 
For most people, the idea of ​​scuba diving in miles of pitch-black tunnels with no wiggle room is the stuff of literal nightmares.

But as veteran British cave diver Rick Stanton told The Post, “I do it for fun.”

He also does it, occasionally, for the most heroic of reasons.

In Ron Howard’s new movie “Thirteen Lives,” streaming on Prime Video Friday, Viggo Mortensen plays Stanton, who co-engineered the rescue of 12 Thai boys and their soccer coach from a monsoon-flooded cave. Along with his diving partner, John Volanthen (Colin Farrell in the film), he was able to navigate the forbidding terrain and locate the boys, who were stranded more than 2 miles into the cave.

With Stanton working as an adviser on the film, he said Howard’s depiction is true to life. “The underwater scenes are unbelievably realistic — other than the fact that we couldn’t actually see anything,” Stanton, now in his early 60s, told The Post by phone. “But of course, that doesn’t translate to a movie screen.”

In the summer of 2018, the Tham Luang cave saga made international headlines. The world watched for 18 tense days to see if the soccer players, who’d gone exploring in the cave and gotten trapped by a flood, would make it out. Conditions were perilous, as the rainy season had started earlier than expected, and local military divers struck out. Stanton was on a shortlist of experienced cave rescue divers who might be able to succeed where others had failed.

On a nearly four-hour dive through narrow, twisted tunnels, he and Volanthen found the team — though they couldn’t initially get them out.

“Our specialty is diving in the caves of England, where you don’t have visibility, so that’s absolutely our terrain,” said Stanton, a retired fireman. He had been diving for decades, and had been involved in previous rescue efforts. In 2004, he and another diver rescued six British soldiers trapped by a flash flood in Mexico’s Alpazat caverns.

“To be able to do this, we have to have a great knowledge of caves, and exceptionally good spatial awareness,” said Stanton, portrayed by Mortensen as supremely unflappable and matter-of-fact in the face of danger and panic. “I’ve been doing this for a long time, so the lack of claustrophobia is born of familiarity,” he said. “By the time I got to Thailand, I had enough experience to be calm in these situations.”

It was Stanton who came up with the solution to get the team — none of whom were divers and some of whom could not swim — out of the cave safely.

“I told the authorities that the only way they’re coming out is if we sedate them,” said Stanton. Each boy would be injected with a sedative to bring them out unconscious and scuba masked, rather than attempting to teach them to navigate the landscape. And it was a landscape that tested even very experienced divers: One Royal Thai Navy SEAL died in the rescue attempt. “I said that was what we were going to do even before we got Dr. Richard Harris on board.”

Harris, portrayed in the film by Joel Edgerton, was a fellow diver and an anesthesiologist, and not initially eager to go along with Stanton’s plan.

“He said it was impossible and it wouldn’t work and he wouldn’t do it,” said Stanton. Harris had never used anesthesia in a situation like this — no one had. And the boys would have to have repeat injections along the hourslong dive out of the cave, which would require each diver to be able to administer them in the water.

But Stanton wouldn’t back down.

“That was absolutely what was required, to be direct and to explain the situation: These boys are not going to come out unless we do this plan,” he said. “The Thais were discussing a ‘no-risk option.’ Which sounds great, but clearly was not possible.” Stanton added that there was no rescue option that was free from the chilling potential of child casualties.

Dangerous as it was, Stanton and Volanthen felt confident in their plan. “Cave diving is not an adrenaline sport. It’s all done very methodically, very carefully and hugely planned,” Stanton said. “We took risks in Thailand, but they were calculated risks.”

In preparation for Howard’s film, “Viggo and I did hours and hours of Zoom calls, and he slowly assimilated my character,” Stanton said. “It was interesting, seeing someone so good at his craft, how he picks up things really quickly — not just vocally, but how you move and hold yourself and do things. I found it fascinating.”

The rescue has been depicted in several other projects, notably last year’s documentary “The Rescue.” There’s also a Netflix series, “Thai Cave Rescue,” due this fall.

Was it emotional for Stanton to see his heroics portrayed on-screen? “Not at all. I’m not an emotional person,” he said. “But I’ve seen it enough now that I like to look at the audience and see their reactions. When the boys are being sedated, the audience is very quiet. And the diving scene, the [scuba oxygen, and tunnel diving] noises that are portrayed — which are real [from the set] — you can see people are uncomfortable with that. I enjoy watching that.”

Ultimately, he said, “I see the film as a celebration of the rescue. Not just from my point of view, but from everyone’s.”