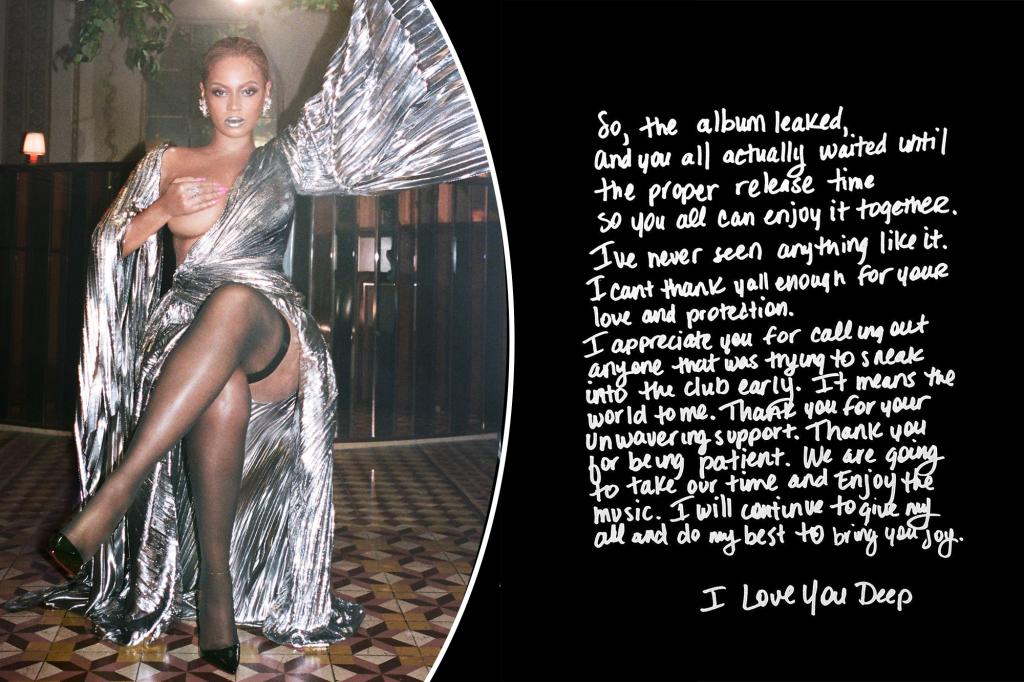 
Queen Bey is showing off her body of work — and we’re not just talking about the new album “Renaissance.”

Intensifying the buzz around the highly anticipated release of her seventh solo studio album, dropped Friday at midnight, Beyoncé, 40, dropped her top and gave #BeyHive fanatics a series of sexy topless snaps.

In the premier shot, perched beneath a gigantic, glistening disco ball, the “Break My Soul” songstress coquettishly palms her bare breast while stunning in a billowing metallic frock and sheer thigh-high pantyhose.

Her musical majesty posted her lusty likeness on Instagram in the wee hours of Friday morning alongside a “thank you” note, blessing diehard fans for refusing to listen to her latest 16-track anthology, which leaked earlier this week, before its official roll out. .

“So, the album leaked, and y’all actually waited until the proper release time so you all can enjoy it together,” Beyoncé penned. “I’ve never seen anything like it. I can’t thank y’all enough for your love and protection.”

The 28-time Grammy winner went on to gently scold her album hacker, chiding the unnamed perp for “trying to sneak into the club early,” and then promised devotees that she would continue to “give my all and do my best to bring you joy. .”

The queen closed the social media memo, vowing: “I love you deeply.”

But Bey wasn’t done sexily celebrating her “Renaissance” release there.

In a separate, yet equally risqué offering, Yonce, still posed under the disco ball, draped her enviable curves across a black couch, wearing nothing but an ebony-hued fur and a twinkling star nipple cover atop her ample cleavage.

The flirty photo, along with others of a similar saucy nature, are plastered all over her Beyoncé.com.

Pinned above the frames on the website is a heartfelt history of how “Renaissance,” dubbed “Act I of a three act project,” came to be.

In the message, Beyoncé says the album, “was recorded over three years during the pandemic.” She writes that, for her, the global health crisis was a “time to be still, but also a time I found to be the most creative.”

The vocal voluptuary went on to reveal that creating the 62-minute album — with features from Grace Jones and Tims, as well as a controversial sample from “Milkshake” singer Kelis — “was a beautiful journey of exploration.”

Beyoncé also thanked her three children, Blue Ivy, 10, twins Rumi and Sir, 5, and her “beautiful husband and muse,” Jay-Z, 52, who she says, “held me down during those late nights in the studio. “

The album features tracks: I’m That Girl, Cozy, Alien Superstar, Cuff It, Energy, Break My Soul, Church Girl, Plastic Off the Sofa, Virgo’s Groove, Move, Heated, Thique, All Up in Your Mind, America Has a Problem, Pure/Honey and Summer Renaissance.

And “Virgo’s Groove” is already being hailed a fan favorite online.

“Listen, Beyoncé is singing at the end of this damn Virgo’s Groove song!!!!,” exclaimed another. “She hasn’t done these kinds of runs since the 2000s. She sang that “You’re the love of my life” like in 20 different scales.”

Others are deeming “Plastic off the sofa” another sure-fire classic.

“Plastic Off the Sofa might be my favorite Beyoncé vocal in YEARS,” a music lover wrote on Twitter. “She hopped in the time machine for that one.”