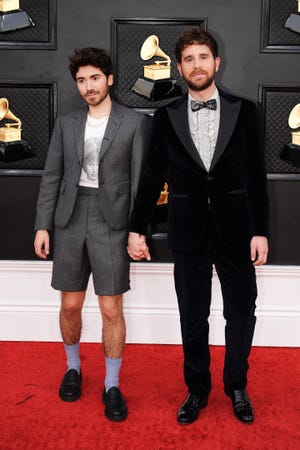 
Congratulations are in order for Ben Platt and his boyfriend, Noah Galvin, who are getting married.

The Tony-winning actor, 29, best known for playing the title role in “Dear Evan Hansen,“ announced his engagement to Galvin, who succeeded Platt in the Broadway musical. A series of Instagram photos showcased the romantic proposal as well as the engagement ring.

“He agreed to hang out forever,” Platt wrote on Instagram Friday. Galvin also shared the news on social media, writing “I said yeehaw and then cried for like 7 hours.”

Celebrities took to the comments to celebrate the newly-engaged couple, with former “Funny Girl” star Beanie Feldstein writing “I AM SO HAPPY AND HAVEN’T STOPPED CRYING.”

Platt and Galvin started dating in 2020, quarantined together during the pandemic. They made it red carpet official at the 64th annual Grammy Awards in April, holding hands and sharing a smooch.

“Ben and I are dating. I asked him this morning, I was like, are we allowed to talk about this?” Galvin said on an episode of the “Little Known Facts” podcast in May 2020. “And he’s like, ‘Don’t go into our nitty gritty, but yeah, people can know.’ It’s still relatively new.”

The ex-Evan Hansens aren’t the first couple to come out of the Broadway show: Taylor Trensch and Ben Levi Ross, who each held the starring role on Broadway and on tour, respectively, have been dating since 2017.

“It’s so goddamn incestuous,” Galvin said of the show. “But it also makes sense, because we all went through the war together. We all feel very connected.”

Platt, who released his debut album “Sing To Me Instead” in 2019, has been open about his love life through his music.

“The whole point of this (album) is to be honest about my own experiences and talk about things that have happened to me,” he told at the time. “A lot of those things just happen to be with men that I’ve been in love with.